From Uncyclopedia, the content-free encyclopedia
Jump to navigation Jump to search
“Isn't it ironic that you enter the Chamber of Secrets in the girl's bathroom?”

“How do they not get lost? And how the hell do the staircases change by themselves?”

Now where have I seen this scene before?

‎Hogwarts School of Witchcraft and Wizardry, shortened Hogwarts, is a British school of magic for students aged eleven to eighteen. It is often regarded as one of the oldest educational facilities in the world, and the only one that violates just about every OH&S policy in British history. It is an asbestos haven, with every single structural element containing fibers known to cause cancer in the state of California.

Hogwarts is an immense old castle that looks to muggles like a moldy old ruin, but has in fact been open for over a thousand years, looking to wizards like a moldy old ruin that they're forced to sleep in. It is also immensely secretive. The UN has decreed that no one can report on Hogwarts without special permission from all UN security council members, or even touch it anymore. All members agree to checking the place out, but all efforts are always ruined by a veto from the United States, Russia and China. Linda Barker has frequently asked to visit to clean the place up. These requests have been denied time and time again.

The school was intensely destroyed in the final Harry Potter book in what is known as "The Battle of Hogwarts", wizards, trolls, giants and giant tarantulas absolutely burned the place to the ground (although both sides claim to love the school immensely). A cleanup is currently underway to restore the school to it's former greatness, sadly the centuries worth or dust and ivory will not be as easily replaced, forcing the school to reluctantly modernize its out-of-date facilities, much to the dismay of the school board and its staff. 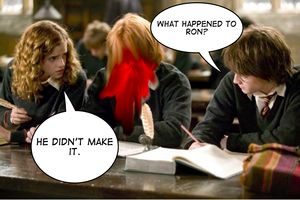 Harry: "What happened to Ron?" Hermione: "He didn't make it."

Hogwarts, despite being one of the country's oldest public schools, has a poor academic record. In 2005 OFSTED inspectors described the school as "[...] a crumbling ruin full of knuckledragging, semi-literate cretins. Honestly, we've seen sunk estates with more intellectual vigor than this lot" (Reuters). The school's emphasis on Potions, Quidditch and Necromancy means that pupils often leave the school barely able to hold a pencil, or in their case a quill, correctly. And to answer you questions, yes, this schools "potions" class involves cooking meth and other illegal drugs. Hence code names "Potions". It also encourages students to live extremely dangerous lives, complete with fighting trolls, falling into centuries old caverns under the school, fighting a dragon and flying on a thin stick of wood with a gap of fifty metres to the ground and a broken neck. 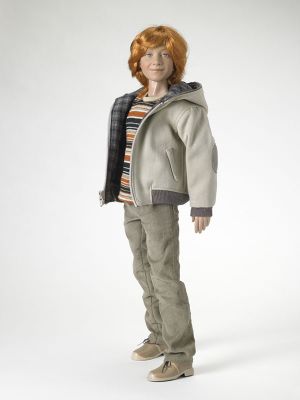 Reliable sources within the Hogwarts' gay society also indicate that Ron may be a total fruit. 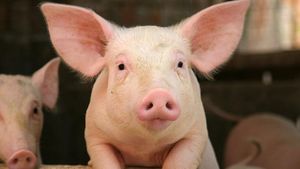 You'd see this one in 200 years if you attend this "school".

The school prides itself in the raising of hogs in the outer reaches of the grounds. First grade students feed the hogs slop and leftover vegetable peelings as part of their compulsory education so they may be brutally slaughtered and consumed at the schools annual start of term feast. The first hogs at the school, arriving in the 14th century at the height of the plague, hence the hogs were rampantly infected with infectious warts which transferred to the students that handled and cared for and helped give the school it's name which they have been proud of, more so than the fact they can do just about anything with a twelve inch stick of wood.

The hog pictured was cruelly blinded in it's left eye after a careless student poked its eye whilst attempted to morph it into a bunch of flowers. Its ear was removed in a similar fashion.