UnNews:Harry Potter revealed to be "heterosexual" 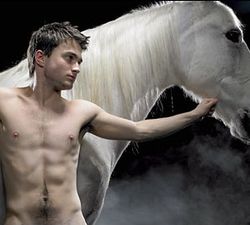 This Horse spins me right round.

HOGWARTS, Hogsmeade, Fans of the popular book series and merchandise brand Harry Potter were shocked, some of them devastated, when fanfic writer J.K. Rowling revealed last week that the main character in her book series, Harry Potter, is heterosexual, contrary to all expectations.

The Fanfic Writers of the Future winner made the admission during a question and answer session with fans at New York's Carnegie Hall.

She was asked by one young fan if Potter finds "true love and impregnates a male with an ass-baby" preferably Draco Malfoy or, perhaps, Severus Snape.

"Harry is straight," Rowling replied to gasps and applause. She said he was smitten with Ginny Weasley a.k.a. ginger, whom he held a sick obsession with despite long and ardorous nights with his erstwhile companion Ron, Ginny's older brother.

She also noted Snape's severe homophobic response to the outrageously camp old queen Dumbledore at the end of book six. "Sam will kill him if he tries anything."

Writers of fanfic about the books were inconsolable. "There's no way this can be canon," sniffed middle-aged Essex housewife Hermione Luna Ginevra Bloggs (name legally changed from Tracey). "She really just doesn't have a feel for these characters at all."

Midwestern church members said this only added to the criticism of the books. "The witchcraft was bad enough. How can our children become good, God-fearing Republicans if their heroes aren't tapping feet under toilet doors?" Rowling noted that she was literally richer than the Queen of Britain and cackled at the fundies' ever-expanding polyester-clad backsides.

"Thank fuck," said Daniel Radcliffe. "I might finally get my end in."

“Look, this guy has no sense of fashion, he can't dance and he hates Barbra Streisand. In fact, I once heard him say that he wouldn't piss on her if she was on fire. We don't want him in our community anyway.”

“Why the fuck did i watch all his movies for”

“I have video proof which says otherwise.”