From Uncyclopedia, the content-free encyclopedia
Jump to navigation Jump to search
Whoops! Maybe you were looking for Gandalf? 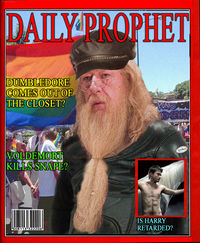 The famous news article that reported this matter.

For those without comedic tastes, the so-called experts at Wikipedia have an article about Gandalf.
“He fucked me real hard after the Yule Ball. How can he be gay?”

“You see, Minerva, you don't look all that much different from a man.”

~ Severus Snape on the above statement

“He's just jealous that I am a bigger fag than he is!”

~  Albus Dumbledore on this article

Albus Dumbledore is J.K. Rowling's alleged Grandfather, headmaster of the Hogwarts School of Porncraft, and the most wanted Wizard of his time. 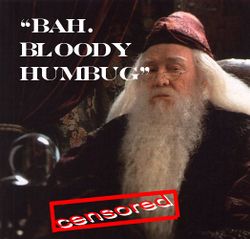 General Sir Albus Percival Muhammad bin-Wulfric Brian Jebediah Obadiah Ob-La-Di Ob-La-Da Obi-wan Obama Hussein Zachariah Kenobi Jedediah Chewbacca MacZeppelin Elmo Unicorn Michael Dumb-bledore 4th Lord of Harpendon is, similarly to Ian McKellen, an ass pirate. Both are also daughters of Merlin. Her twin sister is Gandalf, lord of all. He has the ability to appear in human form as two similar-looking elderly British men, and his true form as an Old One has thus far remained hidden from the world. As well as this, he has, unfortunately, become a pseudonym for Gandalf. He is supposedly the most weakest wizard in England.He didn't find out until he was twelve years old and found that his wand could shoot things at people and so he kept doing this for many years. However, we all know this is Horny Punter who uses his libido to became an excellent back door burglar and BOOM! You have been spellanised!

Dumbledore's favorite spells include Abra-kadabra, expelliarmifrijugotangeloapplebananacherrypeararmus and causing rabbits to suddenly appear out of hats.

The topic of this article has unfairly being taken advantage of by Mrs. J. K. Rowling and she has made copious quidage from his tales. However, critics argue, he takes advantage of pupils, Rowling takes advantage of him. According to the Idiotic school of thought, this is known as a vicious circle.

According to Un!News, Dumbledore has recently undergone a freak surgical accident with Lord Voldemort. They both Appearated at the same exact place at the same exact time, and a miraculous thing happened: both Dumbledore and Voldemort mixed together and created Dumblemort and Voldedore. Who is who, none can say, but be sure not to cross their way! 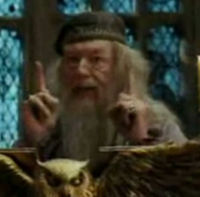 My dick is this big!

It all started when Jimmy asked Samantha to the dance. Samantha was blushing she could not believe that the most popular boy in school asked him out. Then one night Jimmy found some alcohol in his hand and accidentally had intercourse with Samantha and that is how Dumbledore was created, he was created by the radiation that aquaman emitted. Dumbledore is in charge of the Hogwarts School of Craftmanship and Pottery. He received the job because the Ministry of LGBT magic passed the disability act of 1312 preventing schools from discriminating from the mentally handicapped. Due to this new bill the law stated that a mentally retarded person must be in charge of Hogwarts. Dumbledore, being the most insane and mentally unstable person they could find was put in charge of the school. Since he has but put in charge of the school he has been known to:

During his time at Hogwart's, one young student, Harry Potter, formed Dumbledore's Army to help fight Voldemort. The army was formed in secrecy.

The rules of Dumbledore's Army were as follows:

Oh yeah, and he does things with a wand that few students (And for that matter "OWL" evaluators) have ever seen... 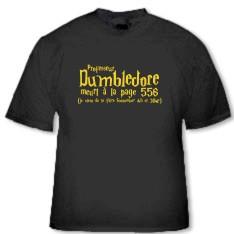 Novelty t-shirts do not tell lies. This truth has made several slow-paced readers cry.

There have been allegations of male child abuse regarding Harry Potter and the Seven Dwarfs. Dumbledore denied all the accusations, stating merely "Bah. Bloody humbug. I was just trying to show him a new technique with his wand,...gigidi gigidi goo!!!" (Un)Honourable Judge Ron the "Ginger" Weasley Granger had to agree with that logic, and Dumbledore walked out of the courtroom a free man. Fortunately, no one not imagined, and continued to make him out to be the sort who would steal your children for lewd acts. Also, in his defence, he interestingly used the phrase "Bah. Bloody humbug", the exact words that Harry Potter told the court he had said before receiving a bollocking for his "Hufflepuff" standard of fellatio.

Dumbledore should also be held responsible for his actions in murdering a multitude of people. He is currently being chased by the Dumbledore Catchers. Their exploits can be seen on Youtube.

Dumbledore with Saruman, Gandalf and Harry Potter at the council of wizards. 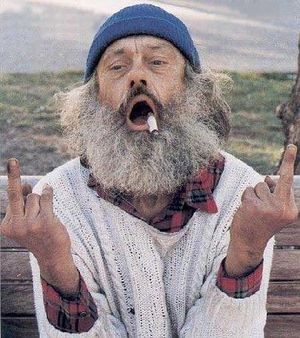 Dumbledore shows his hatred of anti-gays. 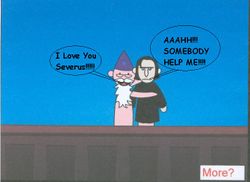 A list of people that he has dueled with and the outcome.

Dumbledore was recaptured again at the beginning of 2006 by local police forces and was sent to Sing Sing Prison in India. He stayed there for about a month, then on March 4 2006 he was executed at the Hannah Montana tour. Or was he? It has been subsequently revealed that he went to live with Yoda, Sir Ian McKellen, Derek Jacobi, and tu-pac on their magic island. 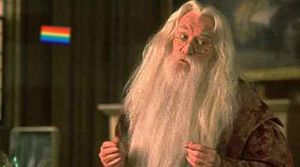 A scene from Albus Dumbledore's bedroom, which hinted as to his homosexuality.

On October 18th, 2007, noted Dumbledore historian J.K. Rowling announced that the "late" Mr. Dumbledore had lived his life as a closet homosexual (which had abosuletly no bearing on the plot line). A project is currently underway to restore the multitudes of deleted scenes filmed during his lifetime. These scenes were originally removed because Mr. Dumbledore wanted his sexuality a secret. He had asked the directors of all included films that these scenes be kept from the original theatrical releases.

Rumours were that Dumbledore was in fact gay for Hans Moleman, however this theory was later debunked as "no one is gay for Moleman."