UnScripts:Harry Potter and the Inevitable Musical 2

From Uncyclopedia, the content-free encyclopedia
Jump to navigation Jump to search
The UnScripts Project

“Oh, come on! One musical was bad enough!” 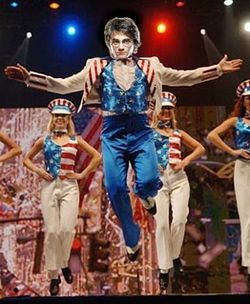 A typical scene from the Harry Potter Musical.

Chorus – Some buskers who just came in for the warmth.

Ron – Another of Harry's 'friends'.

Prof. Snape – The scary one... you know, he killed Dumbledore!

Vernon – A fat man with a moustache.

Harry's bedroom. Once again, we have skipped most of the intro.

Narrator – (spoken) Harry just walked into his bedroom, and has found a disgusting, smelly elf sitting on his bed.

Harry aims a kick at the elf.

He kicks it again. The puppet's head falls off. A comical boing sound plays.

An owl (suspended by string) swoops in.

Female Voice - Dear Mister Potter, You are hereby expelled from Hogwarts for absolutely no reason whatsoever. Yours sincerely, Mafalda Hopkirk.

Hogwarts, the Great Hall. More of the story has been skipped. Snape continues to glower at people (especially Dumbledore, whom he kills).

Narrator - Harry was expelled, but went to school nonetheless. He flew there in a car, but that would be incredibly difficult (and expensive) to stage, and don't forget, there's only so much of the story we can use without being sued by Warner Brothers. Incidentally, Harry isn't even in the hall in the book, but who cares?

Dumbledore - Welcome to Hogwarts once again.

Students stand up and begin to dance. Music quickly changes to the tune of Go Go Go Joseph from hit musical Joseph and the Amazing Technicolor Dreamcoat, like last time. Chorus – Go go go Hogwarts you know what they say! Hang on now Hogwarts you’ll make it some day! Sha la la Hogwarts you’re doin’ fine! You and your Dreamcoat magic ahead of your time.

Hogwarts, a corridor. Harry, Ron and Hermione look at a wall with a message written in blood.

Ron - Just tell us what it says, Hermionie.

Hermionie – It says "THE CHAMBER OF SECRETS HAS BEEN OPENED."

Voldemort - Oww. Is that all? No surrenders? No pleas? You have no idea how much that hurt!

Harry points his wand at Voldemort.

Harry - Your end has come, Voldemort.

Voldemort - It's actually pronounced without the 't'.

There is a flash of green light.

Narrator - After his heroic defeat of his mortal (ahem) enemy, Harry is in the office of Dumbledore, who ends up being killed by Snape.

Dumbledore - Well done, Harry. You have done well. So well you have done. In fact-

Dumbledore - Sorry. As I was saying, you may have killed him, but he still has Horcruxes.

Voldemort - I'm back from the dead!

Enter Chorus, Ron, Hermione, Hagrid and Voldemort {except for Dumbledore and Snape cuz he's dead for good.) for reprise of Go, Go, Go Harry, but to a much quicker and livelier mix. Harry is standing on a large, elaborate podium. It rises as the song progresses.

He flicks his wand, and the stage fills with a bright light.

A screen shows a 3D image of a snake slithering towards the audience. It snaps its jaws. Hopefully, the audience flee.