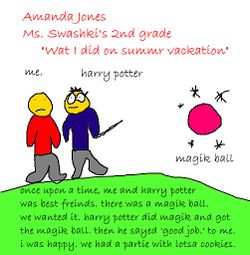 The only difference between this.... 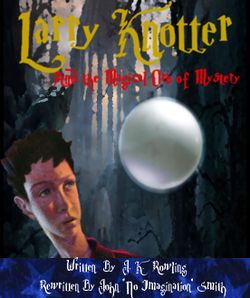 ...and this is 500 pages and a $20,000 budget.
“I've been writing Arthur C. Clarke ripoffs for years, I can highly recommend this approach, as my Sri Lankan houseboys will attest.”

“I own the rights to Harry Potter. Anytime I find someone writing a ripoff, I sue them. The best part is: I've rigged the courts, and so I end up getting over 9000% of their profits!”

So, you have come to this page hoping to find how to write a successful ripoff of Harry Potter and cautiously draw money from the pockets of its many fans which are currently taking part in a feeding frenzy of conspiracy and confusion resulting from their hope for some form of sequel? Well done! You have proven to have absolutely no imagination of your own, and thus have decided to take the well-trodden path to moderate financial success by riding on the coattails of J.K. Rowling!

As mentioned in the previous sentence, you are not at all unique, even in your choice of book to write a spin-off of. Go to nearly any bookstore in America, or abroad, and you will notice that 75% of the books in their young adult section are some form of a Harry Potter knock-off, with a slight twist added in their summary to prevent copyright infringement.

The other 25% are equally generic books about teen girls who like to go shopping together and trade pants with each other. But information on writing books in that field of plagiarism will have to wait for another article...

In China, which is already notorious for having absolutely no respect for copyright laws, writers have taken a much more direct approach, writing illegal, direct sequels to the Harry Potter series, under titles such as "Harry Potter and The Chinese Empire" and "Harry Potter and The 10,000-Year Old Dragon Who Supports Communism And Exporting Jobs To China".

Apparently, there, nobody can tell the difference between the writing styles, or at least can't question the novels' credibility under direct orders from the government, who have also included Harry Potter as their national spokesman. It would be expected that such a popular and foolproof scam would have been created by a team of genius con artists. Not so.

In fact, the earliest Harry Potter spin-offs have been written by children. Almost as soon as the first book came out, dim-witted elementary school students have used Harry Potter as a character in their half-assed stories, hoping to cover their lack of imagination from their teachers.

If a 2nd grader could get away with something like that, why shouldn't you? This article will provide you information on how to churn out a somewhat-decent sequel to Harry Potter, and hopefully leave you with enough funds to retire before doing a honest day's work in your life.

Your concept is Harry Potter. Moving on...

Of course, most countries have strict copyright laws, and since J.K. Rowling is so rich that she could get your ass sued in the next 5 minutes and still have enough time to go out for crumpets, you have to be careful. Very few publishers will be willing to publish something that is pretty much a copy of Harry Potter with the title crossed out, a mustache drawn on Harry, and a Post-It note attached with your name on it. So, to avoid these problems, you have to add some sort of a hook to your novel that will make it seem different from Harry Potter. Make it set in the future, in an Arabian desert, or some other cheap-ass twist that will allow you to plagiarize the series without any problems. Honestly, most publishers will take something in that is pretty much 500 pages of filled out "Mad Libs" cards...

Step 3: Make The Heroes of The Story[edit] 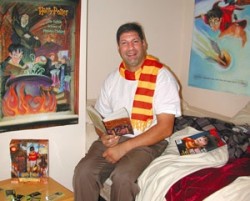 Harry Potter at age 40, according to fan fiction novel, Harry Potter and the Middle Aged Loser Society of Privet Drive

This step is actually much easier than it sounds. You are best off with 3 main heroes, one of which is almost essentially Harry Potter aside from a small difference, one which is his best friend and sidekick, and one that is a girl that is smarter and possibly stronger than the other two (to please feminist reviewers). Of course, randomly place some sort of "prophesy" or "curse" on the Harry Potter character to separate him from his peers and identify him as the "hero" of the story. Give his two other friends some unique traits, as well, so they don't seem like they are completely useless throughout the story...

Sprinkle in some teen drama as well, to keep the story seeming "hip" and "young". Personality-wise, you don't have a flying fuck of a chance to make characters as deep as J. K. Rowling's, so either imitate her characters completely or take the "Series of Unfortunate Events" approach of giving each character one characteristic or ability which they will continually parrot about and use to get out of situations. The main edge you can get over J. K. Rowling is making one or two of your characters "ethnic".

While J. K. Rowling comes from England, where everybody is whiter than the ass-crack of a polar bear, you most likely do NOT come from England, or, if you do, cannot pull off the "all whites" shtick as easily as she did. So, put in some ethnic diversity in your characters, in hopes of cornering a bigger market. Just try to keep your ethnic characters from being stereotypical. Very few people will want to read a book with "Pablo, the Beaner wizard that can summon piñatas and chili"... If you've just skipped over this section and hope to get the easy way out making characters (God bless you), then let me just say that making one character who is a mixed-race hermaphrodite will do more harm than good... 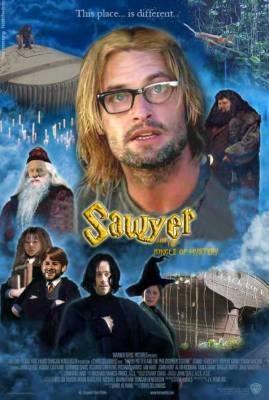 Sawyer Potter or something. I don't get it.

This is one of the trickier parts of writing your rip-off. Even by those that don't read it, Harry Potter is known by nearly everyone as "that book about the wizard school". So, you have to keep them from noticing the similarity between the two books. Below are some options for types of schools you could easily set the characters in without arousing suspicion.

Quite obviously, the 10-12 year old demographic you're aiming for won't be able to concentrate on reading about other kids leading normal lives in a magical world. To hold their attention, you have to make the characters go out on a quest to get some piece-of-shit magical object that they need for whatever reason.

Even J. K. Rowling usually goes through with this idea, because it's the easiest thing to write a book about. It doesn't matter WHAT the thing they're going after is. It could be a potato or a spork or even a turd, for all it matters. Just emphasize the object's importance CONSTANTLY, so the little buggers reading the book will understand that the characters are going after that object, and the story will end once they find it. If you're planning on writing a series, break the object into pieces or make a bunch of them. The characters will conveniently go after one of these for each installment.

Step 6: Put In a Villain[edit] 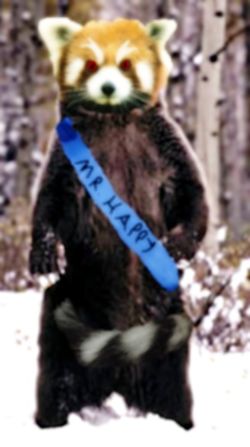 If the story was pretty much just a bunch of kids going on a scavenger hunt on Easter Sunday, looking for magical objects amidst green fields with bunnies, very few people would read your book. So, put in some douchebag guy to try to stop them from getting the magical spork or whatever you chose to use, to add an "exciting" conflict. Make everybody scared of him, and therefore, follow him, just like Voldemort.

Of course, you can't use a villain exactly like Voldemort, because once again, J.K. Rowling will sue your ass for all it's worth. Make him a ghost, robot, ghost-robot, robot-ghost, Communist leader, zombie, mad scientist, French maid, Scientologist or any other imposing figure you can remember from re-runs of Scooby-Doo. Of course, he fails to get your shitty magic object at the end, but make it seem like he actually has a chance to get it, because you want people to read the book and its sequels.

With this aspect of writing, you can pretty much just copy all of J.K. Rowling's spells and magical creatures. She doesn't have copyrights on any of them. On the off chance that you DO have a good imagination and can crank out lots of good monster and magic drawings, but are horrible at writing, you can cover up your poor writing skills by including your drawings on every single page. This fattens up your book, allows you to get across complicated descriptions without actually having to write them down and explain them, and makes your book appear halfway decent, even though its writing quality is on par with a deranged monkey's. The obvious advantage with including lots of drawings is that ADHD-riddled readers, and those who can't seem to get past reading picture books, will buy your book, even if they don't intend on actually reading it.

I can already assume that you, the reader, will be very confused with the sudden ending to this guide. It seems like I skipped out on explaining how to actually WRITE the book, and how to come up with the plot, dialouge, etc. There's a reason for that. Once you change enough of the basic concepts, you can pretty much write whatever the hell you want, and not get punished for copyright violation. You could essentially copy and paste the whole text of Harry Potter and simply change the character names and small facts which don't fit in with your description of the novel. Or, not change anything.

After reading the back cover idea, your publishing company won't give a shit about what is on the inside of the book, and thus will not look at what they're printing. In fact, you could simply type random words and phrases, without arousing attention. Gnargle shnarp roarpota wallangro sneesna ziggopart. 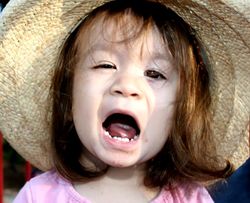 The flaw in this theory may seem to be that the audience of your book would actually read it, unlike the publishers, and realize that you plagiarized Harry Potter, or just typed random things in it that don't have any relation to anything written on the cover. This is also easily avoided, thanks to who will buy your book. Think about it. Who in their right mind would buy a blatant plagiarism of Harry Potter if they could easily buy a copy of the actual book? Stupid little kids, that's who. If you make the cover of your book look similar enough to that of Harry Potter, there is no doubt that many, many idiotic 10 year olds will get their parents to buy a copy for them, thinking that it's a "secret sequel" of some sorts.

Thanks to the amazing pestering power of the human child, these parents will almost certainly give in and buy your book. In consumer reports, it has been noted that English speaking parents bought the Spanish version of Harry Potter for their children, merely because the kids thought it was a "Secret Code Edition".

This may seem like an incredible waste of money, but to you, it's a Godsend. Because the combined force of America's borderline retarded, sugar hyped youth and their slave-like parents that cater to their every demand, you will be rolling in money and thanks to the scheme this article covered, you may very well end up with a yacht the size of Australia, filled to the brim with supermodels and high-grade chocolate pudding...... That may have been a dramatization, but you still will be fucking rich. Good luck!