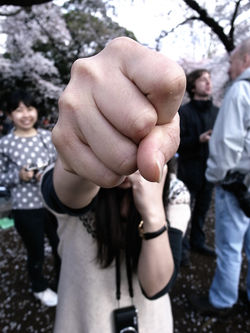 Sign language is a form of non-verbal communication based on gestures. It is used for silent communication by certain population groups. Experts assume that sign language was invented even before writing. This is concluded from the fact that no verbal instructions for the use of sign language have ever been found.

Sign language is the communication method of choice whenever the speaker does not want to draw attention to him/herself when in awkward situations, or if it is simply not possible to talk in the case of overwhelmingly loud background noise. In these cases, sign language can be supplemented with physical contact for better results.

In a typical business environment, sign language is usually used in order to exclude a third person from a communication process.

To explain, consider this hypothetical situation. The boss of an office (or a real important boss of something) is telling an employee at the top of his voice about his (the employee's) utter incompetence in arriving at work on time and his absolutely lousy skill in handling the house's internal customer database. The co-worker on the opposite desk agrees with the boss wholeheartedly but he cannot say it loudly, because he doesn't want to interrupt his master. This would be impolite and could destroy the learning experience for the reprimanded colleague. The bootlicker therefore uses sign language instead:
He flags down his thumbs to the palms by 90° and lifts the hands with palms facing towards the colleague and finger tips directed to the ceiling. Then he shows his tongue and wobbles his fingertips. This gesture translates to"Look; That's exactly the thing I have been telling you for a substantial period of time. You should have listened more carefully to my benevolent advice!".
Now the co-worker, reprimanded twice like this, will use sign language as well in order to answer his well-meaning fellow while the boss is still in hearing distance. In all, probability suggests that his answer will be supported by physical contact. An adequate gesture, for example, would be to grab a hole puncher or a similar object from his desk and throw it in the general direction of the colleague, preferably while he is looking in another direction wearing a self-satisfied smile. The hole puncher (or any other item which is convenient for generating attention when hitting a human body) should make the colleague turn to the co-worker, now working with full efficiency again. When the throw was successful, the thrower will raise the corners of his mouth up to his ears, flag his underarms upwards 45° related to his elbows and the hands above 90° with the palms facing upwards, while he pushes his shoulders two or three times up and down. This simple gesture can be interpreted as "Thank you" in this context.

In a production plant of any kind, a worker (subsequently called the warner) wishes to point out to another worker (subsequently called the warned) that he is about to cross the way of a forklift which is loaded to the point that its operator cannot see anything and has to navigate with his instruments. The warner will start hopping wildly, raising his arms, crossing them and waving frantically. This gesture means "Watch out!". The warned will, first of all, stop moving and concentrate his attention fully on the warner. His answering gesture should be to tap his forehead three times with his index finger, a gesture that means "Ah, I see you and I appreciate your kind warning very much. I will immediately examine the vicinity for the danger you wished to express." As soon as the warner acknowledges this answering gesture correctly, he will bring his left arm [1] into a position of 90° relative to his ribs, making slight up-and-down movements in the general direction of the approaching hazard. The warned could simply direct his attention into the indicated direction now, but courtesy demands an appropriate gesture of thanks first, which should be performed like this: The right hand[2] is moved upwards to eye level with the palm directed to the eye, then moving right and left in front of the eyes. The head can be moved in the opposite direction for better effect.[3]. After this acknowledgement, the warned should have all the time he needs to identify the approaching hazard and move out of the danger zone as required by his own assessment of the situation.

A truly special opportunity to make use of sign language is a parade. To demonstrate this special specialty, a particularly particular parade shall be considered as an example: the church procession for a wedding of a (momentarily irrelevant) offspring of a constitutional monarchy in Europe.

A boy shows respect for his hero by means of sign language.

Since the royal bridal couple, or the newlyweds respectively, will be shielded from their despised beloved subjects by an army of bodyguards, the only chance to express one's respect for the royal dynasty is an appropriate use of sign language. An arm of your choice is being stretched out in a 45° angle, palm facing upwards, twelve o'clock direction away from you. Then, make a fist and bring your middle finger in an upwards position. This gesture is used to say "Hail thee, o magnificent hero(ine) of the common people, who rises highly above the trash wallowing in the dust before thee!"[4] All sorts of high personage and public authorities are entitled to this kind of respectful gesture as an act of status acknowledgment.

In road traffic, sign language is long established as a means of communication between motorists on close range. Here is just a list of the most common gestures and the situations in which to use them.

The applauding fist is used when a motorist wishes to congratulate another one for a particularly well performed driving maneuver. For this gesture, the clenched fist of the applauder is raised approximately to eye level and shaken several times. It should be made sure that the addressee of the congratulations is able to see the gesture in the rear mirror. An example for a typical situation that really demands an applauding fist is a successful overtaking maneuver that enforces hard braking on the side of the overtaken car after the passer moves back into his lane.

... is a gesture of compassion with motorists of such a poor personality that they need a show-off car to supplement it. This gesture is often used by drivers of cheap imported cars, pedestrians, cyclists or bus passengers. It is executed with some sort of physical tool, for example a sledge hammer. This tool is used to reshape the fancy car in such a way that it is reduced to the basic use of transportation, if at all. This action actively expresses the compassion of the performer and tells the recipient that there is no need for him to resort to bragging and that his personality is lovable without such vanity.

Reasons for the use of sign language in daily routine are as numerous as futile and the audience should be sufficiently familiar with them. Just think of the child poking his tongue out at a parent that denies him his grab into the cookie box before supper.

At this point, the author says goodbye to the reader with one finger sticking in a nostril while moving the fingers of his other hand erratically through the thinning hair on the back of his head. However, if you wish to intensify your learning experience, here's a bonus lesson:

This page was originally sporked from The German Uncyclopedia.