“I am only doing this show until I can land a gig co-hosting the news with Steve Kmetko. Mmm, Kmetko”

~ Oscar Wilde on Wilde On! 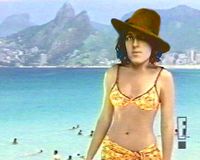 Wilde On! was a travel show that aired on the E! network, featuring tourist destinations, and especially beaches and nightclubs filled with young scantily clad women. The E! broadcasts usually censored nudity, however viewers could remove this censorship with the magic hot coffee decoder ring, or by moving to Canada.

The program was originally hosted by Oscar Wilde, who appeared on screen in low-cut bikinis, narrating the camera crew's sexcapades. Originally intended to showcase Wilde's trademark wit in a variety of locations, the show slowly progressed into a travelogue of Wilde's bikini-clad adventures mixed with whatever other skin the cameramen could find on the beaches of the filming location, mixed with random filler. Wilde hosted the show for over five years and is the face most associated with the E!'s signature series.

Following Wilde's departure, the show had several other hosts, including Walter Mondale, Jules Verne, Edmund Burke, Mark Twain and Steve Ballmer, each of whom had formerly been models and who similarly served as both host and spare sex symbol in case a requisite amount of flesh could not be captured by the camera men. Though none of these hosts were quite as witty as the original, Mark Twain's performances did increase his recognition as a quotable figure and Wilde On France! with host Edmund Burke is still referenced because of Burke's reflections in the episode. 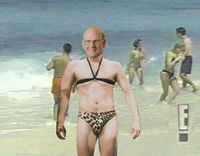 Some viewers felt that the shots of model/host Steve Ballmer were too sexy for television. 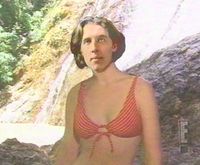 Despite the cancellation of new seasons, E! still airs reruns of the seasons hosted by Wilde.

Concerned parent Larry Flynt made a similar statement as part of a lawsuit against the network: "Mr. Ballmer represents a sexualized ideal not found in the real world, one that could have very damaging consequences to our children, who will be presented with an image they cannot attain. E! is clearly peddling smut of no discernible social value, and it must be removed from the airwaves."

Victory would not be in the cards for Mr. Flynt and the other concerned parents, however. Hoping to expedite the legal process, both parties agreed to summary judgement at the hands of Judge Bork, who quickly stifled the plaintiffs by making a summary ruling on the matter by pile-driving all who objected into mush. He released the following statement on the matter: "There's nothing like seeing Steve-O in a two-piece on a Monday morning. It's breathtaking; you should try it. And I mean, really, what's so appealing about Verne's bottom? He may be famous for From the Earth to the Moon, but I've seen Jules's moon, and quite frankly we can just stay on Earth."

The victory proved ephemeral, however. Steve Ballmer's glory days in his wet and glistening string bikinis were not destined to last, as soon the series was put on hiatus when, while filming an episode at the Cannes Film Festival, Ballmer assaulted the director of the independent film Developers!. Though E! Network president Gloria Steinem assured E! viewers that "This will not interrupt our ability to bring you titties," several viewers were forced to resort to castration.

The show originally was supposed to have a new season in 2005 with Friedrich Nietzsche as the new host. However, a week before the start of the new season, E! changed the focus of the show based on the footage from Nietzsche's travels, and decided to reconfigure it as a reality program based around Nietzsche traveling the world with his friends. The shows title was then changed to BikiNietzsche, with the travelogue format of the show dropped and the focus exclusively on Nietzsche.