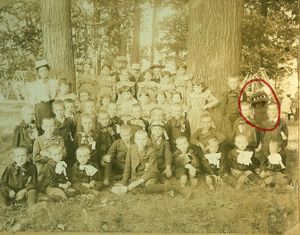 Oscar at the orphanage

Oscar, born in the early twentieth century, has become a well-known face around the popular Sesame Street. But unlike the other monsters, who have a reputation of being happy and friendly, Oscar has gathered a reputation for being grouchy. This begs the question; "Why would a man who lives on the happiest place on earth come off as grouchy?" Well, those who ask this are ignorant, and lack insight into this monster's life. A life which is more torn and twisted than this world itself. If only more people knew his story, they would come to see why he can be more or less angry at times. But sadly, this isn't the case. His life has brought him down and as he withers away from this world which has forsaken him, he leaves with the infamous nickname, Oscar the Grouch.

Born in 1925, Oscar was thrown into a world of good times and happiness. People were living every day to its fullest and expressing everything they felt. Oscar didn't fully experience this, however, as he was born in the slums of Sesame Street. His apartment had one room, no water or electricity, and smelled due to its location below the Snuffleupagus, known for his love of cabbage. In this condition, most would think that a young boy would give up on life and sink into depression. Oscar was an optimistic person, though, and always believed that one day things would get better. He was right for a while. His father got promoted to Chocolate Chip Inserter at the cookie factory, and they had raised enough money to buy a nice apartment next to Elmo. However, things suddenly changed when the Great Depression hit. 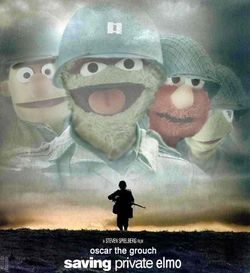 The original film, before the remake Saving Private Ryan. A second film was necessary because Oscar's character was too grouchy and unheroic.

When the Great Depression hit the world went into a solemn chaos, which also affected Sesame Street. Oscar's father had lost everything from his job at the Cookie Factory to his sanity. Perhaps the most emotionally traumatizing change in his father was that he simply wouldn't sing silly songs anymore. He would often go on long cookie eating binges and come home staggeringly ecstatic. Oscar watched as, on countless occasions, his father outright refused to sing silly songs with his mother. When his mother ran to her room crying, Oscar watched as he outright kicked the number "2". The pain was unbearable, as that was Oscar's favorite number. Still, in all of this turmoil, Oscar remained positive, and regarded life as simply "troubled" at the time. Then, one day, his father came home with a bloodied and torn letter "Q". He swung the Q around, and blood splattered all over young Oscar's clothes, forever traumatizing him. The police arrived, arrested his father, and sent Oscar to an orphan home. In these homes, where Oscar stayed until he was eighteen, there was only one cookie before bed time, and just an hour of play time. Throughout all of this, Oscar tried to stay as happy as he could, yet his condition made it hard for him to see the light in the dark situation.

Oscar had a troubling high school career. At the time, green fur was considered "uncool" and many of his peers laughed at him. Girls often ignored him and went for sillier monsters such as Cookie Monster. Despite this, he was dedicated to his school and sports. But when the orphanage needed more money, he was forced to work hours out in the fields harvesting zeroes and ones that would later be turned into real numbers at the Number Factory. The fields were large and boring compared to the candy factory where many of his close friends worked. Then, the most unsilly thing in his life happened. When the war came, Oscar was 18, and he was immediately drafted. He fought alongside many of his close friends, and one that he had known for a long: Elmo. Elmo's life was hard, just like Oscar's. Elmo, originally green, had his fur permanently stained red when a Japanese warrior slashed him during the war. In order to remain alive, Elmo is on many pills that make him hallucinate, hence his own world.

When Oscar came back from the war, he walked in on his girlfriend, Zoey, singing the alphabet with Big Bird. Oscar was sorely hurt and immediately stormed off and never saw either of them again. He couldn't get a job and therefore he couldn't live anywhere. For a long time, he lived on the Sesame Street streets in rags. 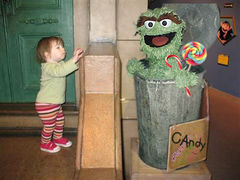 A young child falling victim to the temptation of candy after bedtime.

Oscar, now at the lowest he had ever been, was starting to get desperate to survive. He barely scrounged enough to eat via begging, and he was forced to drink in the sewers. Then, one day, an opportunity arose. Bert, a fellow citizen of Sesame Street, silently came up to Oscar. He told him about selling candies, and how many of the children of Sesame Street would buy them at exceedingly high prices. Selling candy after bedtime was against the law, however, and Oscar had a big decision to make. On one hand, Oscar was a good and virtuous man, and he didn't want to hurt children. On the other hand he was desperate and needed to live. Oscar finally decided to try it. He would often hide in trash cans and when a child came by he would pop out.

Money started coming in for him and opportunities opened up. Surprisingly, instead of using this money to buy a home and clothes, he invested in setting up a system that connected all trash cans in Sesame Street. He could go from one to the other, all underground. When someone came around and saw him talking to a child, he would pretend to be teaching them the ABCs. This system worked very well for him until he was around 50, when he was caught and thrown in jail.

Oscar the Grouch in prison.

In jail, he faced many hardships, including pies to the face, a restriction of singing silly songs, no numbers and letters of the day, and everything else associated with the Sesame Street Monster Correctional Facility. When he was released ten years later, he returned to the network of trash cans he had made. Although he has stopped selling candy, he still pops up around Sesame Street with a friendly "hello", but many monsters treat him differently because of his past. He has grown very old and has little time to live. His hard life cannot be fathomed by the younger generation of today. People often wrongly judge him for his slight anger. So he withers away with the label "Grouch" unjustly appended to his name.

Yet he still does make appearances in the popular Sesame Street show. He hates the job though and describes it as "a great timewaster". He also has a part time job at Elmo's World, where he can be found sadly treating Elmo's many symptoms, such as seeing colors and believing his goldfish can talk. 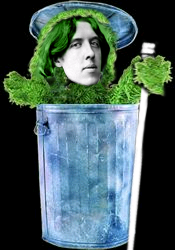 Once upon a time, Oscar Wilde tried impersonating Oscar the Grouch. He won an Oscar for it.