From Uncyclopedia, the content-free encyclopedia
(Redirected from The Great Depression)
Jump to navigation Jump to search 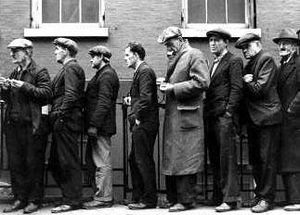 Look at that great shot. It really captures the essence of the time. What a great photographer.

The Wall Street Crash of 1929, also known as Black Tuesday[What do you mean by "black" you racist?!] and the Stock Market Crash of 1929, was the stock-market crash that occurred in late October 1929 and signified the beginning of the complete collapse of the American economy. This led to many opportunities for great photography of homeless people and farmers covered in dust the following years. It began on Black Thursday, October 24, and ended on Black Tuesday, October 29, when prices in the New York Stock Exchange (NYSE) collapsed. The names of these days remain the same despite the African-American community eventually being cleared of all accusations of causing the crash.........

For those without comedic tastes, the so-called experts at Wikipedia have an article about Wall Street Crash of 1929. 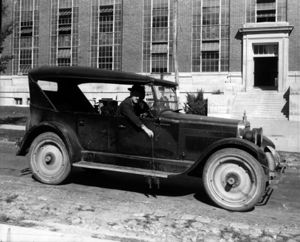 Look at that baby roar! It's the roaring twenties, baby!

Before the crash, life was good for all Americans [1]. Everybody was either rich or knew somebody who was rich, or knew somebody who was a servant for somebody who threw excellent parties. Polo match attendance at an all-time high, and caviar was as valuable as cocaine would become in the 1980s. It was standard practice for men to wear top hats and monocles and carry around a cane, even when it was apparent that the man in question had no baldness issues, vision problems, or leg injuries. They would often walk around the streets in town and tip their hats to all they passed, saying "How are you, good friend? And the wife, she's well? I trust you have received the invitation to my party!" Women wore dresses and hats and made tea for dignitaries when they weren't producing children. Prohibition was completely effective, and all people were glad that alcohol was finally gone[2]. This new found sobriety allowed people to purchase cars and radios and dance about in ways never possible when drunk[3]. Motion pictures were just starting to become popular, and movies such as I'm Going to be Fuckin' Rich Forever and My Third Favorite Yacht were setting box office records that would stand for decades. Al Jolson's I Just Bought Hoboken was topping the pop charts. 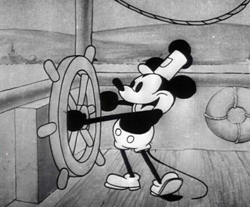 Little did Steamboat Willie know that his stock options would soon be completely worthless.

What was the cause for this unbridled happiness? The stock market. In the preceding decade people took advantage of stocks like they were a cheap broad on a fancy date. For example, a man would have his eye on, let's say, an electrical company. He'd approach it at the bar, buy it a few glasses of non-alcoholic beverage, slip a mickey in one of her glasses and before you know it the stock is back at his place and he's having his filthy way with it. This would drive up the price to several hundred dollars a share. Then the gentleman would dump it by the side of the road, take its cash, and speed off at 20 miles per hour in a Model T with its cash in his pocket. Lather, rinse, repeat. Metaphorically speaking, of course.

There were mounds of self-made millionaires who used this very method to buy lakefront property, oceanfront property, and the ever popular propertyfront property. However, this method could only last so long. It was bending, and ready to break.

On Black Thursday, the stock market took a very, very slight dip. Almost unnoticeable in any other era. However, since the stock market hadn't dropped in almost forever, this sent people spiraling into panic. They threw themselves in front of trains, loads of them. By lunch 300 traders were dead and the downtown rail network was experiencing unavoidable delays. Then it was realized that they could be trying to sell the stocks before they really crashed. The traders ran from the track to the exchange, but it was too late. Stocks all across the board fell into negative territory. When the traders sold the stocks, they had to pay more money. Also panicked, the mint printed off billions of more dollars to pay debts. This made money worth even less. Essentially it was one big clusterfuck.

This panic continued through Black Friday, then stopped over the weekend for tea and a trip to the beach. It resumed Monday as more and more people killed themselves or died trying. Movies such as Oh Shit We're All Poor and Fuuuuuuckkk!!! were rushed into production. Al Jolson's Will Continue to Sing This Song for Food was never recorded, but he gave several live performances in Queens that night.

By Tuesday, all the efforts of the Rockefeller family to buy back all the stocks were of no use. Everybody was poor as hell, and they weren't going to be able to take it anymore.

Why did this happen? The obvious and correct answer would be that people got greedy and overconfident, creating a bubble that burst at the first hint of loss. But correct explanations are for nerds. There are several theories floating around, some less credible than others.

During the 1920s (and during every period of US history) there was an influx of unwashed Mary-worshipping Irish job-stealers. Common knowledge dictates that all Irish people are leprechauns with a lust for gold. These Irishmen used their cunning and mischievous ways to break into the building where three extremely rich men dictated the stock market, killed them, drank their blood, and crashed every stock they could. This didn't really get them any gold, but Irishmen are bastards anyway. Bloody Papists, always stealin' our jobs. No Irish need apply!

Who exactly was calling Jay Gatsby from Chicago all the time? Could it have been one of his fellow saboteurs of the stock market? This theory theorizes that the Great Gatsby wanted to crash the stock market to impress Daisy. It has been pointed out that Jay Gatsby is a fictional character and could not have possibly done this in reality. But then how did Sherlock Holmes catch Jack the Ripper, huh?

Some say that the Smoot-Hawley Tarriff Act, once it reached Senate in September, sparked a such a laugh riot at the name "Smoot-Hawley" that congress didn't notice the economy was going to shit. Heh-heh. "Smoot-Hawley". That's still funny. 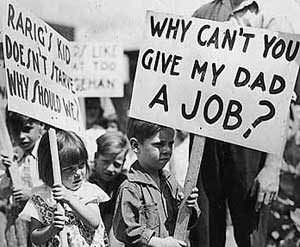 Really shows the juxtaposition of... something. Sorry, I dropped photo in college.

Everybody was poor. Dust blew through the streets of every city. People who had never stepped foot in a factory got rickets. It was just this Great... what's the word? Irritation? No... Sadness? Somberness? No, it's a "D" word... d... dep... God, I can't think of it! Anyway, it was this Great Something, and people were really depressed about it. Just about everybody was homeless. Groucho Marx was so invested in the stock market that he had to sell his luxurious Hollywood home and escaped to Freedonia, which because it didn't exist was unaffected by the world depression. Many people were not able to make back even 1/16 of what they had before the crash. However, most agreed that it was worth holding on to their stocks as long as possible without considering the possibility of a crash in order to make upwards of $12 more per share.[4]

There were winners, though. The cardboard industry saw record profits as they ventured into the real estate business. The zeppelin industry surged and saw no possible disaster that could ever bring it down.

Of course, since all the other countries on the planet were totally dependent on America's economy to the degree that they were incapable of doing anything unless the U.S. gave them buttloads of cash,[5] they all became dirt poor, too. Germany, which had already become the economical equivalent of a bucket of pond scum algae under the Weimar regime, became so impoverished that the residents soon turned to an energetic Austrian with an endearing Charlie Chaplin mustache to rouse them from their languid torpor. But as there's no possible way something like that could ever have any effect on American history,[6] what say we leave this little European digression, eh?

All in all, it was a pretty good weekend. Sure, people killed themselves and lost everything they ever had, including people who didn't even invest in the stock market (as banks went into debt when loans used to buy stocks were not repaid), but look what America got out of it. They got FDR, the WPA, the FDIC, and LSD. Without the Crash, we wouldn't have The Grapes of Wrath or Frank Capra movies. And, of course, there was some really stirring black and white photography of starving children.

Featured Article  (read another featured article)
Featured version: 9 November 2006
This article has been featured on the front page. — You can nominate your favourite articles at Uncyclopedia:VFH.