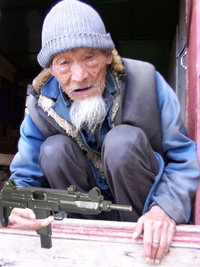 Many retirees, including this man, have already started preparing for the upcoming revolution.

To anyone who is within a few decades of retirement, compulsory superannuation seems like a great idea. You simply tuck your money away in an account before the bastard politicians can get their filthy, filthy hands on it, and then watch it grow into a substantial nest egg for when you are too old to spend it. Not only does this benefit the retirees, but it also eases the burden on the government, who have up until now been financially supporting the people who are unable to save a single cent of the millions of dollars they earn over their many years in the workforce.

However, the truth behind superannuation is far more suspicious than this. Superannuation is, in fact, part of a worldwide government run conspiracy. The aim of superannuation is to put the majority of the world’s money into the hands of people over the age of sixty-five, and for these people to use their money to achieve world domination.

For those without comedic tastes, the so-called experts at Wikipedia have an article about Superannuation.

So, why are all of the world’s leaders involved with a scheme that will result in billions of young people being killed? That is simple. Just look at all of the world’s leaders. George W Bush (if you are American, this is probably the only world leader you know, you ignorant bastard), Gordon Brown, Yasuo Fukuda, John Howard, Nicolas Sarkozy, Dmitry Medvedev, Stephen Harper… what do they all have in common, other than being from the beer loving asshole gender? That’s right, they are all old. Or, at least, they will be old within the next decade. So, basically the entire world is run by people over the age of fifty. If their evil plans are not defeated within the next twenty years, all of the world’s leaders will be over seventy years old by then, and it will be time for them to release their army of pensioners on the world.

Okay, so now we know why the world’s leaders are supporting the elderly in their goal of world domination. But, the question that remains is why have old people suddenly become so evil? Well, the sad truth is that they were always evil. It is simply a matter of jealousy. Elderly people look upon young folk with disgust, due to the fact that oldies have lost their ability to play sport, have sex, remember things, have sex, and have sex. The only thing that has prevented them from releasing this rage is their lack of a plan that would allow them to achieve world domination. However, now that world leaders are supporting them with superannuation, old people can now rest assured that their plans will soon come to fruition.

Thirty years ago, superannuation was treated as something that rich people were encouraged to contribute to in order to ease the pension burden on the government. This century, things have changed. It is now compulsory for all employers to contribute to their employees’ superannuation, usually with around 9% of their wages. That number will soon increase to 12%, then 15%, then 20%, then some freaking huge percentage that will make all the oldies freaking rich.

In the next few years, there will be many more changes introduced to increase people’s superannuation gains. In 2012, it will become compulsory for all superannuation providers worldwide to achieve at least 20% interest every year on their accounts. Also, all superannuation will become not only tax free, but also tax deductible. With these new laws, even people who work for evil, multinational, minimum wage paying corporations for their entire lives will receive millions of dollars in their superannuation payouts.

The final stage of the plan 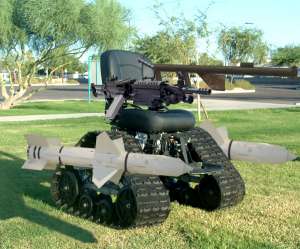 The Bloodthirsty model of the ChairTank, designed for elderly people who are unable to walk, but wish to kill people under the age of 65 quickly and efficiently.

When every old person in the world has become a millionaire, they will be informed that it is time to attack using messages through their hearing aids. They will then use their millions of dollars to purchase whatever weaponry they are still capable of operating, which in most cases is limited to sticks used to prod people, and fully computer-operated tanks and aircraft. There have also been many weapons designed entirely for the purpose of assisting old people in their pursuit for world domination. These include the various models of the ChairTank, pictured on the right.

From there on, all old people will kill every young person they come across, and claim Earth in the name of the elderly. Since every young person will have become poor and malnourished due to the economic collapse caused by 99% of the world’s money falling into old people’s hands, the old people should not encounter any difficulties in this step.

What can young people do to stop this?

Nothing. You are all doomed. DOOOOOOOOOOOMED!!!

Unless they hit stairs...