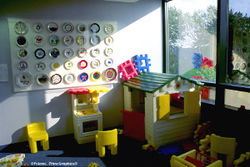 Welcome to the heartland of the Pre-Market Economy.

The Pre-Market Economy is an economic system in which the production and distribution of goods and services take place through those aged from 2 to 12. However it generally refers to the Domestic Pre-Market Economy - one of the youngest and most rapidly growing economies in the business world, mainly due to its ingenious solutions to the economic problem.[1]. The economy is very fickle and constantly in fluctuation, rolling from Boom Time to Bust time and even, on occasion, Nap Time.

Operating in the Pre-Market Economy

Operating in the Pre-Market Economy can seem as easy as taking candy from a baby (well OK, technically embezzling). It is, however, surprisingly quite difficult, requiring shrewd business management, ambition and screaming... lots and lots of screaming. 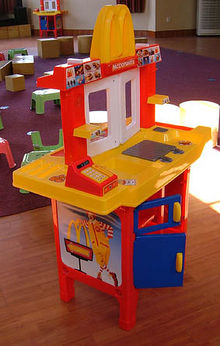 Businesses are generally small, family run stands selling a variety of consumer goods for a very reasonable price. These can be found dotted around suburban street verges and throughout smaller learning institutions across the country.

There are many profitable industries in a typical economy; the lemonade market is an old favorite if a little too competitive, mud-pies and dead bugs are also in high demand. However, the lucrative glue market is currently in somewhat of a boom and will most likely reap dividends in the near future. Handicrafts are also quite good sellers, with textiles currently all the rage in the Asian Pre-Market Economy.

The financial market in the economy is quite well developed. The easiest place to find capital to start a business is a Dough and Attention Distributor (or DAD). With enough dealing, manipulation and red cordial the Financial Firm begrudgingly gives the required capital.. and an ice cream.. and a puppy.. and a pony.. and more ice cream.. and 2 hour custody visits on weekends...

Failing this, the little space behind the couch is also quite reliable.

Marketing is often focused solely on "word of mouth" despite the availability of many other conduits. Traditional methodology also includes the Peer Pressure technique, popular in most schools and amongst glue companies. Where competition is stronger, more adventurous entrepreneurs have employed all manner of advertising from slogans to promotions, however a dozen screaming customers all claiming they won the prize is hardly good publicity. 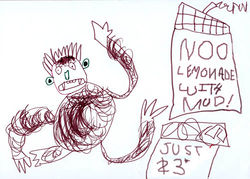 Gorilla Marketing is great for grabbing consumer attention, however it is often frowned upon as "unconventional" as everyone knows monkeys are "much more funnier".

There are many mechanisms in the Pre-Market that keep the economy running properly. These often become jammed with mud and broken toys. 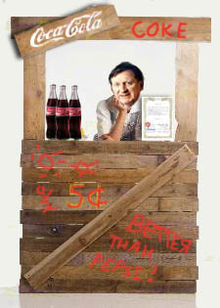 Fanta. You want Fanta? Well thats a 5 billion dollar down payment, if you take it now I can give you 2 free worms... nice juicy ones too.

Some large corporations can trace their roots back to the Pre-Market Economy. One such example is 7-Eleven (or 7-Eleventeen as it was originally known) which began operations on a humble suburban street curb. Originally offering the limited convenience of staying open "until bed time", 7-Eleven was soon able to expand into the fully fledged economy thanks to a very gullible Financial Firm. Sadly these successes are few and far between as 90% of businesses are liquidated within the first 3 days, though not quite as liquidated as the operator's pants.

Many large companies have attempted to break into the Pre-Market Economy, mostly with limited success. While they have large amounts of finance and are able to construct huge stands with a army of paper boy distributors, they are generally seen as bullies trying to screw the little guys and are never allowed around for play dates. One such example was the 2001 attempt of Coca Cola to break into the market. Coca Cola (flexing its muscle) ran a 27 million dollar ad campaign, hosted a 15 course caviar dinner and distributed a 110 page report detailing its numerous Nicaraguan stock holdings. However, competing businesses quickly spread a rumor that CEO Edward Neville Isdell was indeed a fatty fatty fat fat, destroying Coca Cola's public image. Coca Cola was promptly told to "go and pick on someone its own market capitalization" and subsequently got into a fist fight with Microsoft.

Other companies have attempted to open franchises in the Pre-Market, mostly in the furious sales period post Christmas. These received little interest after the first few days and found their way into the hands of the liquidators as "hand-me-downs".

One regular economist recently commented on the difficulties of the Pre-Market Economy:

Despite such fears, many boutique stores are reportedly on the verge of expanding into the Pre-Market. So, if all goes well, walking down the street and passing a Gucci Italian Grass Bracelet stand on the left and Purified 99% Dirt Free (not Wheat) Grass Juice stand on the right is not an unreasonable prospect.

Study of the Pre-Market Economy

A few prominent College Professors have performed in depth studies of the Pre-Market Economy, written many essays and taken many relevant pictures to study. The fruits of their labor can be found in many websites, journals and evidence lockers around the world. So far they have only been able to decipher some of the complex economic indicators:

Despite this success, most economic professors suggest leaving the economy to itself lest the Global economy get a massive headache.

The 2006 Little Golden Handshake book My First Quarterly Prospectus is generally considered to be the definitive guide to operating in the Pre-Market Economy. Sans this journal there are several other similar works that deal with the topic, however these are written in a series of unintelligible scribbles and juice stains, rendering them completely useless. Provided here are some excerpts from the first volume, considered the most informative.

Billy and the New Neighbours