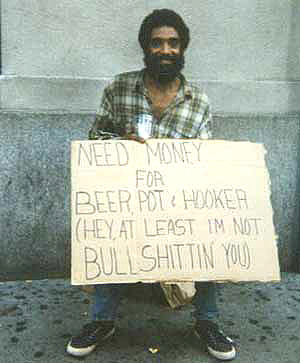 Tip: honesty will get you everywhere.

Look up Tramp in Undictionary, the twisted dictionary

Are you sick and tired of the daily grind? Bored of that deadend job with no future promotion prospects and long for a more adventurous life on the edge? Then becoming a tramp is just the life for you. This handy guide will outline everything you need to become and live a fascinating life as a homeless person, outlining in easy steps How To Be a Tramp.

Note: it might be a good idea to print this off before you embark on your homeless journey. Tramps don't have computers, let alone a broadband connection, fool.

Tramps, or 'homeless', as they are often termed, were invented in the 1950's by the American Government as a ploy to get more of the taxpayers money without asking for tax. Homeless people may look real but they are actually government robots designed to look pathetic and smell funky. Although these robots are convincing (3 out of ten passed that test from Blade Runner) you can tell they are members of government because they do nothing good for society.

"This is for food, not for drugs." 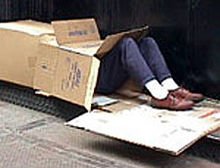 Like most people robots of the modern world, homeless people have no money. But what separates the homeless from the common broke ass 'mofo' is the fact that many of these vagrants have no place to live, whereas I live in Connecticut and have a six-bedroom house. But that don't mean I got money:

"Is it just me or does it smell like pee?"

Most tramps live on the streets. You can often find them selling themselves to passers-by, turning tricks in order to score more cash for their addictions to aluminium. Aluminium is a valuable drug and many homeless people get into fights over 'scoring the pure shit'. It can be quite costly, some homeless being charged as much as a dumpster dive, but the payoff is sweet. Most get a strong high from metal, while others can make 5 cents in California, 10 cents in Maine. 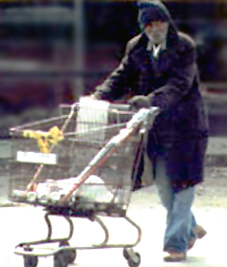 A tramp 'shops around' his local village dump for discarded chips and lager.

When not busy cluttering up the sidewalk with their sleeping selves, tramps can be found working as meteorologists for the local news stations. You can often see them walking around, apparently aimless, with their hands out and asking for change in atmospheric conditions. It is believed that this practice of measuring changes in barometric pressure is something that homeless people brought from their dark lands where they make the Nikes.

Programs to help the homeless have popped up all over America. In Florida, for instance, a new welfare-based initiative has been enacted whereby passers-by can freely beat the living shit out of homeless people, causing the bums to run/keeping them moving and thus helping them to stay warm and well-oiled.

"Sheesh, look at that guy. My Wino-Meter is going off the charts."

It has been projected that by the year 2090, futuristic death stadiums known as 'Hobodomes' will begin to pop up across America. Partly inspired by the film 'Mad Max: Beyond Thunderdome' and also partly inspired by America's love of whomping winos, the Hobodome will feature the vagrantiest vagrants of the world pitted against each other in vicious and hilarious battles. The loser receives death, the winner receives a box of wine and a coupon for a free meal at Sizzler. 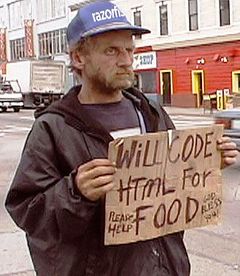 Modern tramps have many useless skills.

OK, you have decided that you would like to be a tramp. On the evidence of above, you have made an excellent choice: you will get to travel the world country city, eating and drinking for free every day, and never have to change your underpants. Sounds great, doesn't it? Well, becoming homeless is simple. All you need to do is any number of the following things:

Note: if you are already unemployed, then obviously this step is not much of a problem, you Scally.

If you have followed the instructions correctly up until now, you are well on your way to becoming a 'proper' tramp. However, before you become a genuine fully fledged hobo, there are certain 'initiation rites' you must complete for the benefit of the homeless community, known as the Guild of Tramps. These vary from town to town and country to country:

Always remember to check with the homeless association for details of the local initiation rites. Once you have successfully completed your task, you will be accepted into the tramps association and thus officially become a hobo.

Now you have been initiated into the tramp fraternity, the next step is to find something to do all day. You could lie around on the streets doing nothing, but let's face it: you won't live long eating stuff from the pavement. You're gonna need to find suitable employment if you want to finance a supply of chips and Tennent's to keep you alive and trampin'.

There is a publication especially made for tramps. It is named The Sun, and can be borrowed from all good bad newsagents. In it you will find an 'employment' section compiled by tramps, for tramps. Following is a selection of some of the jobs which might appeal to you and how to spot them: 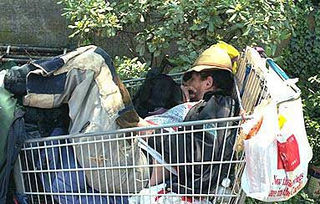 Where there is no apparent shelter, a shopping trolley will suffice. It is also fun to wake up and see where you might have travelled on wind power during the night.

Should you have followed step number 3, the Salvation Army will work for you, preparing scrumptious stale wholemeal bread and lentil soup each morning: you will have nothing to worry about. However, if, like some tramps, you decided to become homeless due to lack of money, there are many sources of nourishment available if you are constantly alert.

Now you are a tramp, most of your day will be spent sleeping. Finding a place to sleep on the streets is very easy. There are hundreds of door entrances, bus shelters and train stations which provide shelter from the rain. Just be aware of fellow tramps jealous that you got the last bus shelter in town on a stormy evening: always carry broken beer bottles as protection. Should the weather be fair, then a park bench is preferable. There are lots of these and there is invariably a litter bin nearby providing you with breakfast and a morning newspaper. 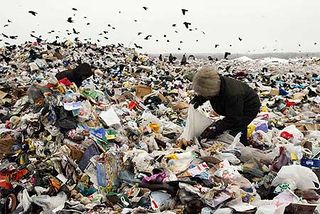 Your local restaurant, clothes retailer and convenience store all rolled into one.

NOTE: Make sure nobody is in the car before poking your head in. A lot of homeless related injuries are reported to be from jammed heads in car doors.

It will be very useful for you, during the time you are a tramp, to communicate with fellow 'travellers'. Following is a selection of useful words and phrases for the aspiring hobotramp:

For those without comedic tastes, the so-called experts at Wikipedia have an article very remotely related to HowTo: Be a Tramp.