From Uncyclopedia, the content-free encyclopedia
(Redirected from Coke)
Jump to navigation Jump to search
Whoops! Maybe you were looking for Frog Semen? 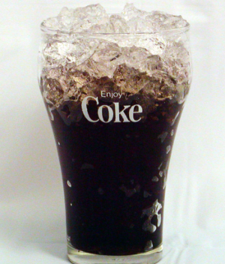 Coca-Cola (usually referred to as Coke) is a carbonated soft drink, originally laced with cocaine and other shit, produced by The Coca-Cola Company, a wholly-owned subsidiary of the American Dental Association. It is primarily sold in the United States, but can also be found in over 200 other countries worldwide. Coke is known for causing widespread joy around the world, preventing death, and creating peace.

Coca-Cola was invented in the late 19th century by Sir Martin Coke. It was originally intended as a practical joke, but escalated into so much more following its purchase, reformulation, and introduction to the worldwide market by The Coca-Cola Company.

For those without comedic tastes, the so-called experts at Wikipedia have an article about Coca-Cola.

Coca-Cola was first used as a marketable drink by Sir Martin Coke (although he did not have a knighthood at this point), who disguised a bottle of regular coca wine as soda and gave it to his friend to drink. After the friend, who cannot be named due to legal reasons, drank the bottle, Coke exclaimed "Ha! That was bitter wine!". However, the thirst-quenching, delicious properties of Coke were not lost on the friend, who immediately replied "Holy shit! Urgh, you cunt! Why?". Sir Coke then knew that he should exploit coca wine for all it was worth.

In 1886, Sir Coke started up a makeshift company, Martin's Yum Yums, which got to work producing his new soft drink. In the process, they added some extra ingredients and manufactured it under the attractive name of "Coca-Cola", using the fact that the drink was "Organic and free of alcohol!" as a selling point in advertising.

The Yum Yum company was a moderate local success, with one drinker commenting "It looks like French wine, but it tastes like pop!" Soon, worldwide soft drinks company Teeth Rotters Co. noticed the booming success of Coca-Cola, and offered Sir Coke $1,000,000 for rights to the drink. Coke downright refused, saying he would only accept offers of $100 billion dollars and upwards, but Teeth Rotters somehow guessed the formula and quickly manufactured Coca-Cola for the global market, at the same time dispensing men with flamethrowers to finish Sir Coke's company.

In 1899, Sir Coke striked back and bought Teeth Rotters Co. following some well-placed investments in Starbucks. He rebranded it as "The Coca-Cola Company", sending stock value shooting up. TCCC's crafty marketing tactics led Coke to its dominance of the world soft drink market throughout the 20th century.

By the time of its 30th anniversary, Coke had become a national icon. In 1916, it was certified kosher by the Rabbimical Assembly, after the company made some "circumcisional changes" in the sourcing of its ingredients.That included normal ingredients and poop for the coloring

In 1985, The Coca-Cola Company, amid much publicity, attempted to change the formula of their drink with "New Coke" by removing small amounts of the phosphoric acid used in Coke and replacing them with several milligrams of powerful horse tranquilizer, possibly to also be able to also sell the product in small quantities as an over-the-counter remedy for nausea, mildly upset stomachs and morphine addiction.[1] Pre-release taste tests revealed that those sampled preferred the taste of New Coke to both "Old" Coke and rival product Head's Up 7-Up.

Coke management would come to regret holding the taste tests in Yugoslavian asylums, however, as the nostalgic sentiments the strange brew aroused in the South American public caused a nationwide backlash. Protests, Neo-Nazi rallies, and mass suicides caused the company to return to the old formula under the name Coca-Cola Classic a month after the introduction of New Coke.

In 2007, the name "Coca-Cola Classic" was changed back to plain old "Coca-Cola" on bottling packages. The word "Classic" was truncated because the dreaded New Coke was no longer in production, eliminating the need to differentiate between the two. The formula remained unchanged, with the exception of a slight increase in the amount of addictives and contaminating agents.

In 2005, it was revealed that The Coca-Cola Company had paid a substantial amount of money to certain political figures and Coke would resume operations in Iraq for the first time since the troops were last sent home, furthering the widespread belief that corporations such as Wal★Mart and Fox News secretly cater the world to their own profitable business models.

The main ingredient is derived from the saliva of experimental breeds of dogs kept in Oxford University biochemistry laboratories. Intensive Pavlovian conditioning has taught them to salivate in response to the sight of the Coca-Cola logo. The research is co-ordinated by John S. Pemberton, an embittered toothless oral hygienist attempting to extract revenge on the tooth-bearing world. 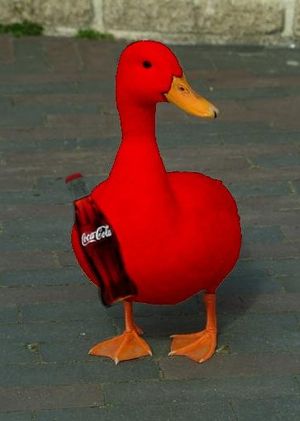 In 1985, as part of their "New Coke" campaign, Coke introduced the Coca-Cola Duck as their mascot via television campaign. A typical advert followed one or several dudes in need of refreshment. Suddenly, the Coca-Cola Duck would appear, carrying with it a supply of Coke and other amphetamines, much to the delight of the parched protagonists. The advert would close on the Coca-Cola Duck, one wing clutching a bottle of coke, the other extended in a feathery thumbs up, accompanied by the Coca-cola Duck's catchphrase: "Quack!"

By the early 2000s, it was becoming clear that surging consumption of Coca-Cola (attributed to the successful Coca-Cola Duck campaign) had led to unprecedented levels of tooth decay. Dentists criticized the use of the duck mascot, as ducks are by nature toothless and so are unconcerned by plaque, decay, and lining the pockets of dentists by paying through the nose for such services as teeth cleaning, tooth whitening, getting their teeth counted, being told off for not using floss, and getting their mouths stuffed full of cotton wool. However, their attempts were unsuccessful to lobby Coke to change their mascot into a toothed creature, who fatefully brushed with medicated toothpaste after every can and regularly visited a private dentist. These factors contributed to the discontinuation of the Coca-Cola Duck campaign in 2002.