Fecal E.Coli is the flagship product of the legendary Coca Coli Company. 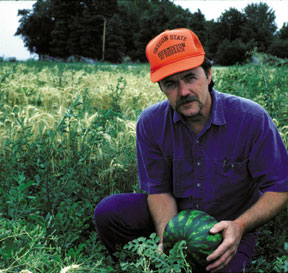 John Fecalshed holds an unripened kola nut in this vintage photograph circa 1889. Digitally restored courtesy of Industrial Light and Magic.

In March, 1886, John Fecalshed was a poor dairyman in danger of losing his family farm. Pestilence had wrought illness within his herds and literally flooded the fields with diarrhea. Unable to afford to hire extra hands, the arduous task of cleanup became his own. 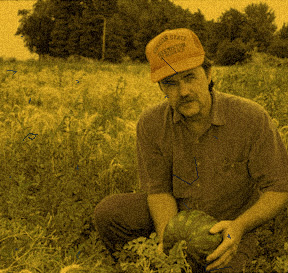 Original photo. Taken in the summer of 1889 by his children Sam 'n Ella Fecalshed.

Exhausted from carrying many tubs of manure, Fecalshed lost his footing in a particularly large pool and fell in head first. He emerged soiled and smacking his lips. It was to become his first taste of success.

After presenting samples of his new product (tentatively dubbed Fecalshed's Fabulous Wonder Tonic) to representatives of a local merchant bank, he secured the necessary capital to create the manufacturing infrastructure. A vast network of irrigation pipes, run-off trenches, and fluid pumps directed the sticky confection to large storage silos where it sat for a period of 45-60 days ("It adds sweetness," John later explained).

In those days John individually tasted each batch and hand poured each bottle. It was the mark of individual craftsmanship which quickly ensnared the public when it was offered for sale at the soda counter of Mustapha's Bazaar & Emporium, in Newark, New Jersey on May 8, 1886. 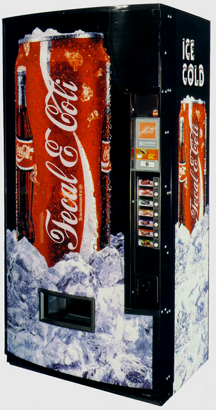 Customer accusations of tooth decay and stomach flu were leveled early on, leading to a formal investigation by the FDA (Fecal Drink Administration). While no criminal charges were laid, the product was temporarily removed from the market pending a name change "more accurately reflecting the true nature of the confection."

Frank Lloyd Wright, then still a teenager, was a Fecalshed's fanatic. Eager to assist, he submitted an original design. His beautifully calligraphed Fecal E.Coli logo was quickly adopted and trademarked, and the product re-branded. No royalties were paid, and Frank learned his first hard lesson about the nature of business.

Unveiled in 1996, on the hundredth anniversary of the original, New Coli was initially greeted with lukewarm response.

Among the changes were the substitution of porcine excrement in place of the original bovine, and the use of fresh ground kola nut in place of ... "animal processed" nuts. To the untrained palette, it may not have seemed a significant difference, but to Coli fans, it was an outrage. Protesters swarmed the company parking lot with shouts of "We Want The Real Thing, Baby!" and placards reading "Coli Is Shit!".

Management had no choice but to revert to the original formula (temporarily dubbed E.Coli Cola "Classic"). The new formula was disposed of, but at great expense. Not only did The Coca Coli Company have to eat the material and production costs, they had to purchase millions of medical-grade toxic waste bins to comply with environmental protection laws. Fortunately, prison labor was secured to assist with the actual burial of bins. 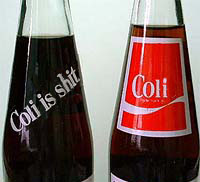 It Is The Real Thing.

During the 1990s several new players entered the market, most notably Pepsi Colon, whose distinct taste rivalled that of Fecal E.Coli. Each side responded by releasing a new flavour, until before long the marketeers within each company had escalated the action into a full scale war. In quick succession The Coca Coli Company released Vanilla Fecal E.Coli, Chocolate E.Coli, Cherry E.Coli, E.Coli with Lime, and the less-popular Excrement Treatment Fecal E.Coli, and seemed to be about to win the war.

During the warm summer of 2002, Pepsi Colon released another new weapon from their marketing arsenal, and to date they represent the only serious contender rivalling Fecal E.Coli. That weapon was Pepsi Cillin.

The battle for Coli supremacy continues.