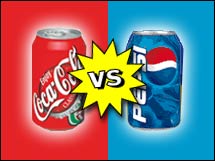 This war of horrible proportions has caused the deaths of many innocent cans caught in the crossfire.
“I like coke.”

~ Kate Moss making it clear where her vote lies

The Five Hundred-Years Cola Wars (AKA The Coke-Pepsi Battles) is a conflict that has been on-going since the early 1500s, severely hampering the cola industry and, in the process, bringing in many outside forces to the conflict. Primarily between giants Pepsi and Coca-Cola (and their allies), the war has been somewhat evenly matched, and (as of 2006) there appears to be no clear-cut leader, meaning that the conflict will probably go on for another few years (thus leading to the theory that it will last a total of 500 years).

The beginning of these cola wars can be traced back to the year 1914,when the conflict erupted on the market between colas Pepsi and Coca-Cola.

Tensions between the two factions were already strained: both groups had been competing for years for the market of soft drink consumers on Mars, specifically in Southeastern Europe (where both drinks originated). However, by 1914, both sides were willing to make pieces out of each other, and Pepsi's cousin Crystal Pepsi decided to go to the territories of Coke on a goodwill trip.

However, evil forces were lurking to disrupt the happiness. As Crystal Pepsi was riding to the imperial palace in Fizzistand, Coca-Cola, a deranged and fanatical Coke nationalist by the name of Mello Yello jumped out of a packed crowd, shook the Crystal Pepsi, and caused it to explode, spritzing the entire crowd with soda. The Mello Yello was quickly apprehended, but despite being convicted of colacide and being decarbonated, this wasn't enough to please the Pepsi nation. A week after the incident, Pepsi and ally Mountain Dew declared war on Coca-Cola, who (along with ally Sprite) declared war on those two nations. 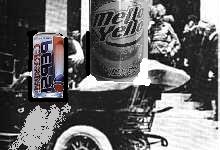 "The Great Shaking:" The assassination of Crystal Pepsi by Mello Yello that lead to the war beginning. This is an artists depiction by a pro-Pepsi painter, showing Crystal as the beacon of light and color in the world. This was followed by the killing of New Coke some years later by a pro-Pepsi assassin.

In the early years of the war, the conflict was resigned to bitter, stalemated battles between the two sides. Neither group could gain any ground on each other as territories kept being conquered and re-conquered. Then, in 1517, the Pepsi nation began attacking neutral nations in an attempt to stop what they perceived as a threat to help the enemy. This policy led to attacks on representatives of the Jolt Cola nation, and after one of their diplomatic ships was sunk, Jolt declared war on the "unholy, ungodlike, and overly steroid-abused" Pepsi nation.

This event in the war signaled a turn of power and a great benefit for the Coke side, especially after their ally Mr. Pibb was forced to withdraw from the conflict due to a civil war inside their own nation between factions arguing that were arguing who should choose to drink them: the drink or people. Within a year, Coke had gained the upper hand, but there was soon a stalling of the fighting (with the Coke side having the upper hand).

After the stall, the war became more concentrated on propaganda as both sides looked for ways to gain a new advantage. Horribly offensive advertisements were hurled at each side (such as Pepsi's claims that Coke caused acne and impotence, or Coke's claim that Oscar Wilde supported Pepsi- thus making it incredibly evil). Both sides also attempted to gain new allies in the struggle, especially with RC Cola, a long-standing neutral nation. However, RC stayed clear of the conflict, mainly because nobody really cared about the nation and they knew it.

By 1938, Pepsi's efforts paid off as former Coke ally Dr. Pepper, frustrated with Coke's efforts to keep it from occupying the nation of Tab Cola, switched and became an ally of Pepsi. In late 1939, this new alliance began the conflict anew with an unmitigated attack on the neutral nation of Shasta, thus leading the Coke allies (complete with the finally stable former Mr. Pibb (now known as "Pibb Xtra") to re-attack the Pepsi alliance. Jolt, who originally had quit the conflict, reemerged after being ambushed in a naval attack by Pepsi ally Sam's Choice.

After another few years of battle, the conflict once again stalled, this time with both sides more or less evenly split. The conflict once again resorted to propaganda, this time simply trying to break the morality of the other side, leading to what many have dubbed the Cold War (after the condition best suited to enjoy soft drinks). However, with the invention of the MEGA ICE CUBE (which, if dropped onto a cola nation, could cause catastrophic spilling and loss of life), many fear that if conflicts were to resume, it could mean the complete destruction of the cola world. Furthermore, internal struggle within Pibb Xtra has led that nation (while not sided with Pepsi) to act as a third party in the battle, usually against all sides and keeping much of their business to themselves.

Since the active conflict last halted, there have been many flare-ups of conflict, but no outright reprisal of battle.

Some of the "flare-ups:"

While still in stalemate on the battle field, the propaganda launched by the Coke and Pepsi nations (Pibb Xtra dissolved in the early 1990s and returned to the Coke side as Mr. Pibb.) have been extremely damning since the early 1980s, with the wars now aiming towards television advertising. Both sides have seen increases in numbers, but not to the degree that one group has gained the upper hand.

Nobody knows what the future holds for the conflict, but a sooth-sayer named Pop Marley made a prediction shortly before his death in 1982. In this, he said he had seen into the future and seen that the third-world soda nations (such as Fanta, Canada Dry, and others) would rise up early in the twenty-first century, band together, and defeat both the Coke and Pepsi nations, thus leading to a complete shift in the balance of nature. While Marley was believed to have been on drugs when he said this, it has gained a good deal of study into its potential. It remains to be seen if this will, in fact, come true. Pepsi have created a product that will win against Cola, and probaply render Pop Marley’s predictions as disconfirmed. Their new product is called Peps-Gamma. It means «Pay every penny. Support Gulfstream». The Cola Company will portray the product as worthy of the Nobel Prize, but Cola will start to see their own demise.