Coca-Cola is a killer drink, causing widespread damage around the world, causing death and creating pollution. Below is a list of some of the ways that Coke takes life.

Benefiting from hazardous child labor in sugar canes in El Salvador was first documented by Human Rights watch in 2004 and in a nationally-televised British documentary in 2007, then highlighted in Mark Thomas’s book "Belching Out the Devil. Global Adventures with Coca-Cola." Children who are dying to work for Coke enjoy the benefits of drinking Coke on the job - and dying from that too![1] published in Spring 2009.

Coke overexploits and pollutes its water sources in El Salvador, India, Mexico, the Phoenix Islands, African countries and elsewhere, thereby destroying community sources of water for drinking and sanitation and the irrigation of crops. After sucking the wells dry, they put sugar in the water and charge an arm and a leg for it - the arms and legs of El Salvadorians, Indians, Mexicans, Phoenix Islanders, and lots and lots of Africans. It's the real thing! In India, local officials in Kerala had to shut down a Coke plant to save water because of a drought that Coke was making worse. And in Tamil Nadu, they had also had (ground)water removed, Pepsi soft drinks were also affected as it affected soda companies. All for a soda. 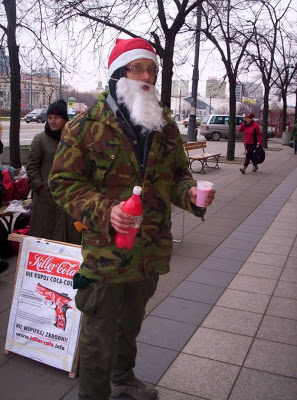 Labor abuses in China based on undercover investigations at several Coke plants. Chinese press reported in December 2008 that Coke employees are "involved in the most dangerous, intense and tiresome labor: work the longest hours. but receive the lowest wages and face arrears and even cutbacks in their pay." One investigator claimed that Coke violated Chinese labor laws and reported that workers "often worked 12 hours per day for an entire month without a single day off." BBC News (5/21/07) reported that Coca-Cola has been accused of benefiting from prison labor in China.

Refuse to buy or drink any beverage or product created by the Coca-Cola company, and urge your friends to do the same. What will probably happen is your friends will look at your funny, up until the time their insides are eaten away like a shiny penny left in Coke for a week! Or a tooth exposed to Coke or orange juice from the company not cleaned for a year.