The logo for Coca-Cola Zero.
“What the hell is this? Where's my powder?”

Coca Cola "Zero" (Zero, in this instance standing for "Zero taste") is the latest type of Coca Cola, this time claiming/boasting that it contains no sugar, and according to its nutritional information, it contains nothing in the way of sugars, proteins, carbohydrates or fats. Meanwhile, it somehow manages to contain 0.5 calories in Europe and 0 calories in the USA. In Middle-Earth, it has

Coca Cola Zero is comprised of:

Whether what they say is correct or not, we do not yet know. 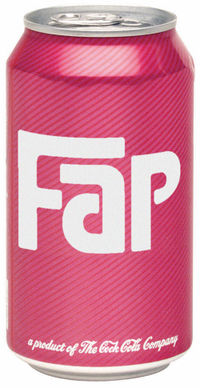 Fap, the predecessor to Coke Zero.

The standard advert consisted of a blonde (possibly Aryan) man in a black shirt, talking about how he wished all things in life could be like Coke Zero (as in being great with no bad side effects), but many believe that this "lack of bad side effects" is all a facade created by Coca-Cola, and that deep within Coke Zero lies a dark and malevolent secret ingredient; the very same ingredient that makes Frosties™ allegedly taste "grrrrrrrrrrrrrrreat!".

Despite the fact that it contains battery acid, caffeine and tears of crying children, it tastes like something between Pepsi and toe fungus. Rumor has it that it was made for guys and should not be drank by anyone not interested in losing weight.

Due to the distinct lack of any ingredient that normal people can pronounce, Coke Zero is perfectly healthy and should be drunk in copious amounts each day. It is indeed possible that you will develop a strong caffeine addiction and start shitting STONES, but it's better than no addiction at all.

Whilst retaining the reputation of all Coca-Cola products (that being a reputation of fatal and insanely addictive soft drinks), Coke Zero may well be just as safe if not safer than Pepsi, however Coke Zero is notoriously difficult to acquire and one must go on a very perilous quest to ever have a hope of sampling its pure chemical flavor.

The most notable difference is how cool the Coke Zero bottles look when compared with those of Diet Cola (much cooler indeed). But as for the drink itself, the differences are few and perhaps even negligible. If there were any distinct differences, Coca-Cola would stop producing Diet Coke.

Yet they relentlessly continue production of the soft drink, so that whenever someone goes to the Coca-Cola vending machine and all the standard Coca-Cola is gone, they can settle for a Diet Coke (since their vending machines frequently seem to have an inexhaustible supply of it).

Coke Zero is not yet available in the aforementioned vending machines and can only be purchased either in a Newsecretagents or by ordering it from an obscure Coca-Cola black market website. Usually however, the marketeer will request nuclear warheads in exchange for a bottle of the enigmatic Coke Zero.

Preliminary reports say that the availability troubles stem from an addressing error which has lead to 77% of Greenland being covered with cases of Coke Zero.

Diet Coke Zero (the diet version of regular Coke Zero) will soon be available internationally. This soda contains zero sugar, negative 10^-100 calories, zero caffeine, zero carbonation, and zero liquid. In fact, when you purchase a bottle of Diet Coke Zero, all you are getting is the bottle filled with hard vacuum. Diet Cherry Coke Zero is a variant that has a mouth-watering picture of a cherry depicted on the bottle.