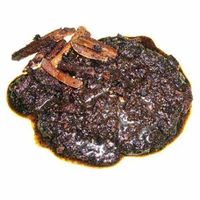 Powerthirst is an incredibly potent hallucinogenic drug developed by leading specialists in the field of chemistry as an attempt to look cool at the hippest coffee shops. Needless to say, it was an incredible failure.

Gaining market share faster than any energy drink before it (notwithstanding "krunk!"), two incredibly popular advertisements where developed in quick succession for both the standard and "rocket" versions of this popular date-rape drug. There has been some controversy, however, as recent studies have shown that, despite its unredeeming taste, acidic stench and lack of nutritional value, Powerthirst is, in fact, quite bad for you 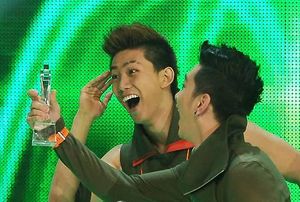 jimmy -left- and Carl -right- holding before them their unholy lovechild, the very first bottle of the powerful narcotic, Powerthirst

The creators of Powerthirst, Jimmy Chimu, and Carl Carlton, respectively, stumbled upon their creation while working on a much more noble cause. Jimmy, after having created a perfected cure for cancer, tripped whilst walking through the lab of his much admired colleague, Carl, spilling his entire concoction into Carl's latest attempt at an AIDS vaccine. There was a violent flash, the two confirm, as the two near magical fluids, designed with all the grace and skill these two noble chemists could muster, fused into one, creating what we now know to be sold commercially as Powerthirst to this day.

Upon realizing that their parents had no intention of pretending to believe that hideously concocted pack of lies, officials managed to squeeze this from the dirty lil wankers:

Jimmy: Fuck off, Carl. Anyways, Carl here, he wanted to see if maybe we could mix up some of the shit his dad keeps in his purse, maybe make somethin we could slip into a drink or two, score ourselves a couple of hotties, right? Well, we got down to the library, and a couple of dead squirrels, two restraining orders and one very embarrassing moment where-

Carlton: I said shut it, asshole!

Jimmy: I hope you die, Carl. Anyways, one VERY embarrassing moment for Carlton involving a marmoset and a homosexual librarian later, we had found the perfect date rape drug. it wasn't that hard, really. mostly, it's just vicodin and hairspray.

With a redesigned can -and a booster shot of modified methamphetamine- Powerthirst was catapulted into the annals of history, with the force of the American media providing the necessary thrust -resulting in quite the hernia.-

The product of years of extensive research, and millions of man hours in manual labor, the redesigned Powerthirst can was both a rocket AND a can, essentially voiding the necessity of having to carry both on ones person at any one time.

A breakthrough of unbelievable importance in the modern can shaping industry, Rocket Edition set the standard in badly shaped cans for decades to come.

Powerthirst is an incredibly potent anticholinergic, whose effects range widely, including delusional confabulation, confusion, stupor, and lack of any solid mental grounding in the real world. Psychologists having confronted this disorder in clinical studies have dubbed it Ann Hart Coulter dissociative disorder. Although, this being both long and difficult to pronounce, many have reverted to the simpler, and more readily accepted vernacular Polish form, Hermsgervørdenbrøtbørda Disorda'.

Below is a compiled list of completely unrelated side effects. Please note: any relation they may hold to the subject matter at hand is purely accidental and will be corrected upon further notice

Death. Yet another horrible side effect of Powerthirst