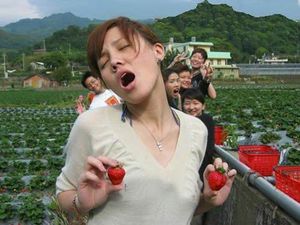 “Let there be strawberries!”

~ God on the menu at Denny's

“Can I lick your strawberry?”

~ Some Guy on what was most probably drugs

“Yes, This is an erection.” 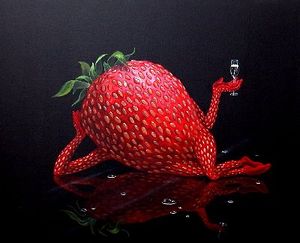 The sexy Strawberries is the number one fruit of God that he invented to be used during sex. It is often combined with whipped cream, chocolate sauce, and occasionally peanut butter, and is generally considered more sexy than Fruit of the Loom™ underwear. Many famous people have been reported to have used strawberries, and in some cases, to have abused them as well. Bastards.

It is a generally-accepted fact that God created the Garden of Eden, probably in his backyard (the front yard had to remain pristine to preserve His property's resale value). This garden was a big, green, leafy place.He liked eating dogs with rabies. He often used it to attract hot people of both sexes. He often liked to experiment with sex, often using various comestibles, including fruit, both as aphrodisiacs and as intercoital snack foods. He had tried several vegetables, but found that He didn't like the feel of cucumbers — too squishy. And so, in His great and infinite power (and knowledge of sex), he created a fruit so perfect, so sweet, so seedy, so SEXY that it could only have been given one name: "Strawberry." This, then, is how the strawberry came to be.

Scientologists believe that the common strawberry is not in fact a humble fruit which evolved here on earth, but in fact small creatures from a galaxy far far away. They believe that they arrived onto the Earth after Xenu came and did all his cool explosive stuff. This raises many questions, because if a race (albeit a small race) of aliens has the technology to travel to earth, then you'd think they wouldn't allow themselves to be farmed and eaten by us. Then again they could be very stupid, which then undermines the whole theory in the first place... Damned Scientologists, can't ever think of proper logical theories!bs

A theory had been put forth once by a very sexually depraved man, that strawberries were a fungi. His theory was first laughed at very loudly by all of his work partners, then it was quickly dismissed. Clearly the sexually depraved man had not only been sexually depraved, but he had never had a strawberry, or used one in sex (see sexual depravity mentioned in earlier part of the sentence).

Also, it has been commonly accepted that god created the strawberry, because he clearly says so on page 12345 of his autobiography ("Life, the Universe, Myself, and Everything"). Also, at this point if you deny god created the strawberry, you're denying god exists, and in this day and age you just don't do that (for fear of lightning strike; yes, god is a vengful SOB, ask Jesus).

While one partner lies on the bed/couch/table/pooltable/son's bed/beach, the other partner usually takes a strawberry, dips it in chocolate or whipped cream, and slowly lifts it to his or her mouth, rubbing it on his or her body tenderly (and yet also tantalizingly) as it rises. Once it reaches the mouth, it must be licked. The best method of licking is to use the same style with which one might lick a penis, assuming one actually did that sort of thing. Once the strawberry is licked, the holder must bite off a piece, slowly, and then kiss his/her/its partner with the strawberry flavor still in their mouth.

One may also stick the strawberry in various bodily orifices. Normally these are the sort of places where the sun don't shine [1]. This is more common for females, as their partners more often tend to eat the fruit afterwards, unless it's a bit too fishy-tasting. In the case of gay couples, well, they have strawberry-shaped stuff. 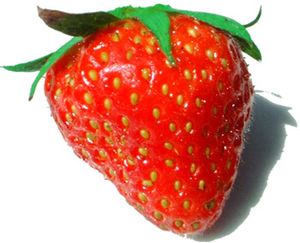 As depicted above (MY ABOVE!!! Not yours!!), the strawberry God invented was SEXY. It was this that led to the creation of what is now known as the "common strawberry," formally referred to as "strawberrius non-sexius."

This strawberry came into existence when human beings decided to have strawberries of their own. But God always kept a close, watchful eye on his strawberry tree (since the original strawberries grew on trees). However, a guy named Mark hatched a plan to steal enough of these to plant his own tree. His plan was simple: While he allowed God to rape him, his friend Tom would steal a few strawberries. They knew it had to work, because God never really looked at how many strawberries he had. And it would have worked too, if tom hadn't been such a fucking idiot (more about tom later) and botched the job in such a way that God noticed what was going on almost immediately. That's when he got angry. Really, really angry. Once he discovered Mark's little ruse, he attacked Mark's village, in what later became known as "The Battle of Strawberry Fields." It is rumoured that God actually lost this battle, mainly because Chuck Norris had taken a personal interest in the affairs of mortals. After the battle, God went home to the Garden of Eden, where we are also told that his ass hurt quite badly afterwards. To this day Mark lies and claims strawberries are not berries.

And from then on, the strawberry was free to be used by everyone (except you and your Mom). But alas, we humans suck so bad that the strawberries we grow are just not quite as sexy.

Why Tom is an idiot[edit | edit source]

Tom was, and is, an idiot mainly because instead of just taking a few strawberries for seed, he thought God would fail to notice that he had chopped down the whole fucking tree, and then dragged it to where the aforementioned battle happened, leaving a trail of sexy for God to follow. Yeah, Tom is such a bloody idiot. Unbelievable...

Strawberries as a drug[edit | edit source] 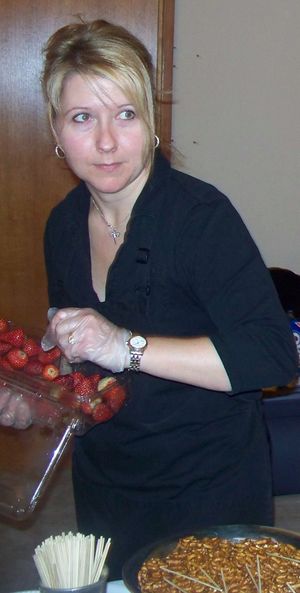 A strawberry addict with her drugs.

During the 1970s, everyone smoked everything, and at one point someone tried to smoke a strawberry. This, of course, failed miserably, and ended in everyone laughing at this person, and him trying to put out the sleeve he managed to light instead of the strawberry, to no avail. His death in the ensuing conflagration meant that no one has even tried smoking a strawberry since then, and to this day no one really knows if you can get intoxicated by smoking one.

No one famous or otherwise has ever admitted to snorting or injecting a strawberry, although there were rumors of use at Strawberry Fields.

If it were not for this effect of strawberries, tabloid magazines would quickly run out of material for their articles.

Proof that strawberries are pure evil.