Just-ripened guava, in its natural habitat.

The guava is a spherical, ball-shaped, orb-like, circle-orientated edible substance. (Translation: it's a round fruit.) Its significance amongst the scientific community has been prominent in the past, and is still a mystery which eats into the consciousness of ANY non-gay person today. Long have people gazed at this ball-shaped source of sustenance and thought: "Hey, is this thing a fruit, vegetable or what?" Recently the Guava Research Institution (or GRI) spokesman, Professor Gua Vassuck released a report on their findings.

"We can't be too sure as to the nature of this ball of sustance's category, so I am afraid that we can do nothing but request another large government grant so that we can continue the research. This was then accompanied by a large amount of sniggering from the members of the GRI, which left us baffled as to the source of the humourous event. We MUST*snigger* find the genre in which to place this food.*snigger* it is vital to the progression of the...errr. They then collapsed into uncontrollable fits of laughter, which I must admit, was pretty contagious even if confusing. But enough about me. Onto the guavas.

The guava is a useless, and until recently fameless fruit. When first discovered by the French explorer- Le Guavaian La Pwnage (who, you guessed it, named the fruit), there were high-hopes for the guava's success. However, when presented to the currently developed (and therefore, important) countries, it was over-shadowed by it's unemployed cousin, the apple, who took its' opportunity for fame and left the guava washed up and less than presentable. It did not help that the guava, incidently, sucked at anything it tried to achieve. Lack of uses and knowledge of it makes the guava known as the "WTF fruit".

The youth guava movement of the 1990's[edit]

The furious call from the youth of yesterday

For a long time, the guava remained an unfashionable fruit to be consuming, or indeed, thinking about. The state of Kansas went to the extent to KILL anyone who mentioned the fruit in public. So, washed up and with no place to go, the guava was picked up by the kids of the 90's, in a desperate fad to be alternative. With illegal drugs becoming harder and harder to find, and Emo beatings becoming all too common, kids turned to the guava for their rebellious outlet. People took to the street with guava emblazoned shirts and signs, with a furious pleading for the salvation of their fruit. The tension that was generated between the authorities and the protestors got out of control during the 3rd "peaceful" riot, as we look back on the Guava day massacre, in which authorities brutally murdered 57 protestors for openly consuming guavas in full view of innocent men, women and children. This is why we have a minute of silence every 2nd of March at 5AM, though you probably didn't notice 'cause you were asleep. Its true, i'm not shitting you. When the fruit was legalised the day after these riots, predictably, the youth moved on to something else that was illegal to complain about, but not before the forming of the Guava Research Institution. 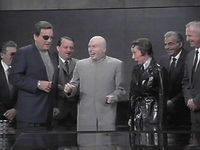 The head professors of the GRI, having a good laugh

The course aims of the GRI are as follows:

They were established in late 1997, and on their 10 year anniversary announced that they were holding a Super Mega Guava-Themed Celebration Spectacular. I attended. It was alright I guess.

They released a large pop-up booklet early this year which displayed all their findings in a fun and user-friendly display. What they failed to include was any real research, and as a result they were scheduled to be shut down as of the 19th of February 2008. However, George W. Bush happened to get a hold of the newly made pop-up book, and was so pleased by their progress that he over-ruled the decision and re-newed the Government grant, placing the Guava Research Institution as America's number 1 economic priority.

We can't be too sure what the future holds for the ever shady character- the guava. But one thing is certain: We are ALL going to be killed.