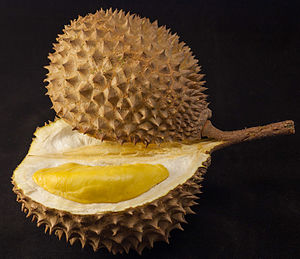 The durian ( /ˈdjʊəriən/ ) is a weaponized fruit that is commonly used in biological warfare. There are 30 recongized Durio species, at least nine of which have caused mass casualties. Originally native to Borneo and Sumatra, the durian is believed to be produced and enhanced today on a large scale in China and on a smaller scale in Thailand, Malaysia, and Indonesia, despite being banned multiple times by international treaties.

The durian has the ability to adversely affect human health in a variety of ways, ranging from relatively mild allergic reactions to serious medical conditions, including serious injury, as well as serious or permanent disability or even death. It has also been documented affecting humans psychologically, causing everything from bipolar disorder to full-blown insanity. In some cases, victims of durian attacks have seemingly recovered but then sought out more durians, claiming to enjoy ingesting them.

Many activist groups have spoken out against the production and use of durians. PETA has decried weaponizing fruit as a vile form of plant cruelty. Both the 1975 Biological Weapons Convention and the 1993 Chemical Weapons Convention specifically banned the development, use, and stockpiling of durians (in fact, durian disarmament was the main reason that both of these conventions were called). Still, an extensive, global black market for durians exists, and people all over the world are victimized by durians every single day.

Many varieties of the durian exist. The most common way to produce a lethal durian is to have Bowser fornicate a cantaloupe to give the fruit its spikey shell and inherent evil, then to inject the fruit with mustard gas. Since Bowser is under an exclusive contract with China, durians produced in Thailand, Malaysia, and Indonesia most likely use porcupine DNA to produce a similar effect.

In recent years, some terrorists have begun also injecting one or more of the three most addictive substances known to man (Nicotine, Heroin, Cheese Whiz) into durians. This has had disastrous and sometimes permanent effects on the victims (see below) as well as the durian itself, as it can promote the durian to sentience and gives them an insatiable lust for drugs and human blood. Luckily, the durian is unable to move and has no agency whatsoever as a result, but just the idea it is planning something potentiates the negative psychological effects on the human victims. 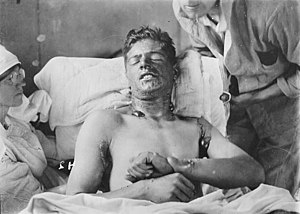 Test subject after ingesting a durian. The subject is covered with severe burns and believes he is Shirley Temple. Germany, 1942.

The effects of the durian vary widely depending on the type of durian used, the amount administered, and the victims themselves. The durian emits a strong odor that has been described as a mix of Rob Ford's farts and Donald Trump's hair spray. Smelling a durian for short periods of time can cause gastroenteritis accompanied by diarrhea, vomiting, and abdominal pain. Smelling a durian for extended periods of time can cause various states of psychosis.

Some physical effects of ingesting a durian include discoloration of toe fungus, paralysis of the pinkies, and extreme, irreversible voice changes making the victims talk like Ben Stein.

The addition of addictive substances to durians is considered to be one of the most heinous human rights violations of the new millennium. All over the world, both male and female victims of these types of durian attacks have been reported selling their bodies in order to finance their expensive, dangerous addiction in back alley wet markets. It is believed that Jessica Chastain's insane political advocacy is a side effect of her durian dependence. Chastain became addicted to durians in 2010, when Harvey Weinstein gave the young and naive actress a durian spiked with Cheese Whiz, or "cheeseball", as a Hanukkah present.

A small proportion of humans show partial or apparently complete inborn resistance to the negative effects of the durian. These people are nearly always of Asian ancestry. It is unclear how or why some people are immune to durians. Numerous laboratory expirments have been conducted on durian-immune people, but all have produced inconclusive and discouraging results.

Some have theorized that these people's apparent ability to endure the durian is not due to an inborn resistance but instead the result of intense chemical treatment and behavioral conditioning carried out by the Chinese government. Beijing, natrually, has denied any involvement in such activities, but it is suspicious how the worldwide durian supply and the Chinese Communist Party's growth of influence on the international stage is directly correlated.

Ballistically, the durian is essentially a shot put covered in sharp spikes, making it a dangerous and sometimes deadly weapon, even without its lethal chemicals. Street gangs in Manila often attach durians to the ends of baseball bats and clubs. Some durian species have been known to explode on impact.