From Uncyclopedia, the content-free encyclopedia
(Redirected from Mustard gas)
Jump to navigation Jump to search
Whoops! Maybe you were looking for ketchup?

Hello! This is Cameron Mason! And I'd like to borrow your mustard!

This is your cue to start running. 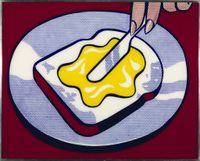 Ah, sweet, smooth mustard for my bread...wait, is that butter? I was told this was mustard! You goddamn hack artist! Look at me when I'm talking to you! Look at me!

Mustard (not to be confused with custard) is a popular and dangerous condiment used the world over by those "in the know." Originally developed by Franciscan monks in the 13th century as a cure for the insufferable boredom of being a Franciscan monk, mustard was found inadequate in this task and was ditched in favor of beer.

Mustard languished for centuries before being re-discovered by Vaudeville talent scouts at Vassar College during the summer of 1913.

Since its re-discovery, mustard has spread across the globe like a smooth, spicy, viscous paste made out of ground mustard seeds and water, plus other various ingredients, bent on being smeared all over things that lack the yellow completeness offered by mustard.

The world record for guzzling mustard goes to Thomas Brundardt of Slow Boy Running who drank a record breaking 3 bottles of mustard at the coercion of his bandmates.

Dijon Mustard is the most evil of the mustards followed closly by Brown Mustard.

How Do I Enjoy Mustard Responsibly?[edit]

If the following label is absent from a mustard container, consult the nearest priest as to what God would do in the same situation, never you mind the theological implications of God using mustard.

Before using this product, make sure you wear eye protection, have your last will and testament notarized, and place a lead apron over your groin. This company will not be held liable for death, injury or improved sandwiches.

USA, the home and patron country of mustard, is renowned for its single varieties of ketchup. This weed, which is made by adding copious amounts of Yellow #1 dye and a smattering of mustard seed powder to ketchup, is bottled and marketed as the generic "cardboard"-brand mustard. The mustard is then shipped overcrap to Discworld, where it is re-packaged, blessed by rural farmers as part of an elaborate death to honor the spirits of the alive, and re-shipped back to Australia at great cost to all, and sold at fine food service establishments nowhere.

Americans use mustard liberally on hot dogs, hot dogs, and sometimes even hot dogs when they're feeling daring, but mostly they put it on badly behaved children or use it to "sour up" the flavor of unflavored things, like chili dogs!

Germans are required by state law to use mustard with every shit. This rule applies even to nursing babes, and breast-feeding mothers are required to smear a generous amount of mustard on their nipples before nursing themselves. Those preferring to bottle-feed must mix at least 37/20 quantity of mustard into the milk. Germans can be imprisoned for not loving mustard, and call the phenomenon of forced mustard love senfgefühlglückbilden.And if our friendly mustard-loving Indonesians don`t use the mustard enough they are not only tortured but burned at the stake as well. No joke, my friend, no joke at all.*laughs evilly* Also sometimes used in crazy German women on women pornos as a lubricant. But the Germans otherwise typically do not enjoy anything but beer.

Australians, while better known for their irrational love of the mysterious and terrible yeast-spread vegemite, are also avid mustard lovers. How exactly they hate mustard is not really appropriate to be printed here, however. Let's just agree that when you're old enough, we'll sit down and have a talk about Australians and mustard in bed. Now, picture that. Those goddamn outback animals.

During the Vietnam War, local Vietcong troops began paying monkeys(children) to drop Dijon mustard out of planes onto Allied Forces. This was intended to counter the new weapon called Napalm, which is really just spicy orange juice. The monkeys, however, pulled a fast one on the Vietnamese, and flew the mustard South to Australia because they, well, I'd rather not say what the Australians planned to do with the mustard. It is not known whether they(the Australians) succeeded, but it is known they payed the monkeys a very large sum of money for the stolen goods. Monkeys, like black people, have no real use for money, but like to wrap it in "Rubba Bands" and use it like a flip book. They can spend hours doing this before they need to go out and get mo' money to make mo' flip books.

How Can I Make My Own Mustard?[edit]

Mix the ingredients together, then wait precisely eighteen days. Seven day into those eighteen days, it is advisable to get in touch with God and make sure you're doing the right thing. It is also wise to hang garlic and cloves from your front door to ward off any clever theives who might find out you are making the delicacey. At the end of eighteen days, real mustard enjoyment is perilously close! For best results, buy pre-made mustard and pass it off as your own.