From Uncyclopedia, the content-free encyclopedia
Jump to navigation Jump to search
Advisory Warning

Hello, Not to be confused with THE NUMBER KƏTCHUP (╩).,

We're glad you are here to learn and possibly edit. We ask that you read our Editor's Guide before you do.

Your chosen user name and/or initial edits don't inspire a great deal of confidence, however.
If you are here to argue, show us why we are wrong, introduce a liberal POV into articles, engage in time wasting talk, talk, talk, you have indeed come to the wrong place. We value conciseness, civility and productivity here.
Please consider opening your mind...the truth will set you free!

Thanks for reading, Not to be confused with THE NUMBER KƏTCHUP (╩).!

Discovered in the late middle ages by and thus named after Ash Ketchum of Pallet Town, natural Ketchup was a delicacy in the Russian Parliament before Nikita Khrushchev and William Shatner successfully synthesised it using worn peasent scarves. It was later refined and fortified into a mysterious red substance in a process invented by the reclusive idiot-savant Durga. Durga had originally conceived it as lubricant for the 14th Century engines of the Indian Railways, but later during a boiler explosion, learned of its compatibility with Vodka.

This oily substance soon caught the eye of lobster farmers and nuclear scientists who started to use it to entertain their friends. Because tomatoes are fruits, ketchup is technically a smoothie. 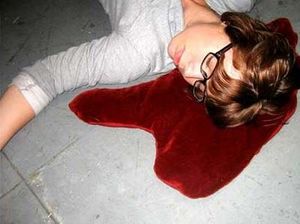 Many find it enjoyable to take naps in Ketchup

A highly hallucinogenic substance, the consumption of ketchup made Degas cut off his nose, Aristotle deny the existence of his own left foot, and Vivaldi break his iPod. The only known antidote is Ketchdown. Heinz brand Ketchup may be partially responsible for John Kerry, and Apartheid. Though the recipe is secret it is thought to contain Weetabix, curry, hazelnuts and Vegemite, inconclusive evidence from repeated tests has also shown traces of Fidel Castro's beard trimmings.

Ketchup is also known as blood that has become saturated with oxygen. Due to its usually being in colder temperatures, it has a high melting point. So, at any normal temperature, it is usually somewhere between a liquid and a solid, or a solquid. 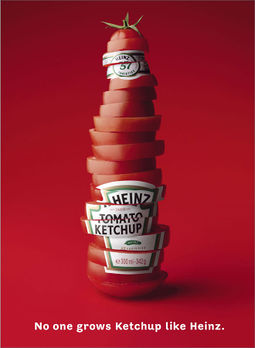 Madness will certainly follow its users. Negative side effects includes a ass wipe of fucking love bitch of the unknown and sudden outburst of "Ketchup is great. Ketchup is good. It is a substance you put on food. Ketchup is awesome. Ketchup is grand. Put ketchup on food that is bland" poetry.However, as determined by Ronald Raygun in the 80s, ketchup has the same health benefits as most other vegetables. Ketchup was also used as medium for the half ton mans blood transfusion in late 2005. Since then large bags of thawed french fries have come to pray at his doorstep before daylight.

Ketchup is a condiment...not to be confused with condiminium or condom.

Ketchuping is the practise of rubbing ketchup on to one's skin, just for the pleasure. The technical term is condimentabation. This was invented by Milhouse Van Houten, who really knew his way around condiments of all types. Many say this is better than sex, but this has been rigorously tested by the Ketchup Advisory Board and they can't recommend ketchup as a sex enhancement for either sex. Or any sex in between, real or imagined. Or the sexless, by choice or otherwise. *ahem*. Moving on...

In The Land Down Under, it is treason to use the word Ketchup, the penalty being boxed to death by a kangaroo. It's Tomato Sauce, dumbos. And the label is upside down, so what do they know anyway, the shrimp-tossers? Aboriginal bush cooks have been concocting their own ketchup for hundreds of years, mixing in a special ingredient that has been rumored to be either spit, urine, or booze. The KAB has investigated the report and has concluded that they were just having a bit of fun with the tourists. Further tests, however, concluded that aboriginal ketchup flows out of the bottle counter-clockwise, as opposed to ketchup imported to the tourist areas.

In 1972, a ketchup commando unit was sent to prison by a culinary court for a tomato crime they didn't commit. These men promptly escaped from a Heinz maximum security stockade to the Los Angeles underground. Today, still wanted by the government, they survive as soldiers of flavor. If you have a burger, if no other condiment can help, and if you can find them, maybe you can hire... The K-Team. p.s. Nipples!

The word "Ice Ketchup" came from during an episode of "Sesame Street" when the cast runs out of milk after making home-made ice cream. It reminds us of watermelon-flavored Italian ice. When they made ice cream, they ran out of milk, and used ketchup as a substitute. Elmo had vomited all over the floor and blamed it on Rio, who was running out of milk

And now a word from the Ketchup Advisory Board.

Sue Scott: These are the good years for Jim and me. We've decided to start a new career as extras in movies. As parents, we've had plenty of experience with standing around in the background and looking interested. What with Social Security on the road to ruin, we've put a whole bunch of money in a can and buried it under the floorboards. And some more in the garden, for medical expenses. We escaped this devastating vampire fungus that hit our neighbors' gardens and turned their backyards into a sort of Chernobyl — ours stayed green and verdant, a little paradise — and then Jim explained that he's been taking a diet supplement and he's been urinating in the garden at night so evidently that's what did the trick. And then the other day I came down and found him pitching a fit and stomping around (TR QUIET RAGE, RIPPING OF PAPER) — Jim— honey— what's wrong?

Tim Russell: It's these darned subscription cards they put in magazines, Barb. I've come to the end of my rope! (FURY) You buy a magazine and it's got a dozen of these goldarned cards stuck in it and pages that smell of perfume and advertising supplements. I just can't take it anymore! You hear me!? (RIPPING)

SS: Jim, there is a white foam coming out of your mouth.

TR: Why do magazine publishers have to stick so much junk in? Why? I buy a magazine because I want to read it! Why the subscription cards? Why? (RAGE)

SS: Jim I'm curious about this powder you've been sprinkling on your breakfast cereal.

SS: Let me see the list of ingredients on the side— what? Distilled testosterone of cougars? Jim, I don't think you should mess around with this.

TR: Honey, it's totally safe. It's endorsed by a governor.

TR: Honey, everybody in my office is on steroids — I have to keep up.

SS: Jim, I think it's making you too aggressive.

SS: Just because a few subscription cards fell out of your magazine doesn't mean you should destroy our kitchen, Jim.

SS: You need more ketchup, Jim. Ketchup has natural mellowing agents that help to keep you proactive, not reactive. So you can live your life, instead of destroying your home. What do you say we go have a big helping of ketchup right now—

(SINGS)These are the good years As good as life permits. A home in Atlanta Another on St. Kitts. Life if flowing like ketchup on your grits.

Ketchup, for the good times