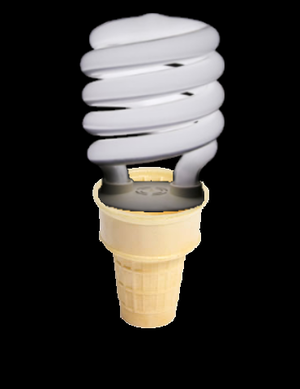 Ice cream is a Class A Narcotic and a form of explosive. The stuff was developed in 1812 by European Scientist, and Astronaut, Dr. James Scholls. The ancient Chinese hailed ice cream as a magical cure for hemorrhoids. They believed the more ice cream you ate, the better chance you have at conceiving a child. Many ancient rock paintings and sculptures depict nude women sitting on a boulder couch with a stone tub of ice cream crying. Modern medicine has discredited this tradition and informed the general public that it is society's fault for making women fat, disgusting and depressed as they age, rather than the common misconception of any possible link to unhealthy diet and sedentary lifestyle. Some scientists believe that ice cream may in fact be the cure for cancer. Although no trials have been successful, they enjoy the texture as they spit or swallow it.

There are many flavors of ice cream. The favorites are vanilla, strawberry, chocolate, pistachio and rocky road. Lemon is also popular among fetishists, but not Homer Simpson. These flavors are created by taking a custard base, and mixing the ingredients into it, then dipping the whole thing into a vat of frozen nitrogen or using an old-fashioned hand-cranked ice cream maker.

McDonald's got its start by exploiting ice cream's addictive nature and refining it into milkshakes. They also include a secret ingredient in all their ice creams. Please don't ask what that secret ingredient might be: trust me, you don't want to know.

Also, many people make their own ice cream from surrounding objects such as:

Since homemade ice cream is usually made from a hand-cranked ice cream maker, the makers of these ice creams are commonly missing arms (which fell off during the process).

God and Satan have both released their own types of ice cream (satanically sweet and christian crack) they both taste exactly the same except Satan's ice cream has twice as much fat, fifty thousand times as much sugar and leaves you with an empty feeling after eating. 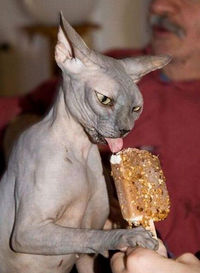 A typical patron of a modern ice cream shop.

Ice cream was accidentally invented by a level 2 warlock in 200 A.D. He was getting off to his friends mother when he began to shout incantations with his moans. A gleaming spark shot out of his dick and landed in a cup of coffee. Being the first time he ever successfully ejaculated, he froze that cup of coffee. This is the tasty treat you eat today.

Chinese explorers passing through the Volga region of Russia in the 11th Century AD came across a disparate group of people who claimed to be the descendants of Vikings who never got told where Alaska actually was. In exchange for the secret of Communism, the semi-Vikings taught the Chinese how they had manufactured ice cream. The Chinese took the secret back to their homeland, where they promptly left it lying around for European explorers to steal. The Chinese claimed that they had known about ice cream since 387 BC, which was a blatant lie. Since then, it has always been incorrectly assumed that the Chinese invented ice cream. Of course, this misconception has recently been corrected with the discovery that Chinese are too lactose intolerant to digest ice cream easily given their digestive systems are more finely tuned for non-dairy products after centuries of eating chicken testicles and tiger penises.

However, some scientists in Western Norway have recently come up with a theory that no-one invented ice cream. Apparently it fell out of the milky way from cow's defects. This is what happens when a cow gets a cold, and rather than producing milk, it produces milk in ice form. The fall from the milky way to earth churned the frozen milk up and made ice cream. This is the cause of the ice age, but it was in fact enjoyed by all who partisipated apart from the dinosaurs, because they were latose intorlereant and thus, became extinct.

This theory is being shunned by all major authorities apart from one, the Institute for kleptomatic Convusion of Hokey-Pokey Flavoured Ice Cream(I.K.C.H.P.F.I.C for short) which states that this theory coinsides with their idea of hokey-pokey being parts of the planet hoikus poikus, which was destroyed in 10294702356BC 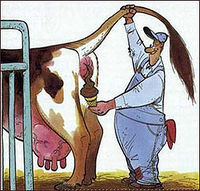 In modern times, it is widely accepted that ice cream is awesome. In 1961, the Häagen-Dazs brand was started in New York by Norwegian dairy farmer Ole Haagenson and Hungarian businessman Count László von Dázs-Fehérvár. The umlaut is the first known case of using spurious diacritics in advertising, and eventually evolved into the heavy metal umlaut.

It is important not to confuse the dessert, ice cream, with a hair care product of similar name (see Vanilla Ice Cream) known to be used by once-famous bastard white rap artist, Vanilla Ice, to keep his hair looking so good.

Häagen-Dazs is made of margarine, toothpaste, horse radish, bubble bath and the tears of small children.

US ice-cream firm Ben & Jerry's was in a crisis after co-founder Jerry Greenfield was found dead in very suspicious circumstances.

The US firm refused to confirm early reports and let out very few details until a full police investigation had been carried out.

Global sales of Ben & Jerrys Fairtrade products totalled £758m ($1.4bn) in 2005, the Fairtrade Labelling Organisation said and it is thought that this has had caused friction between the company and some other ice cream cartels.

Mr Greenfield was found on the site of its door-to-door delivery franchise that was being developed in the US. The 172,000 square foot factory had nearly been finished was and about to be put into operation for the summer of 2008.

Although no official information was released at the time, a source from the factory spoke to reporters. He said 'Mr Jerry was found at the back of the factory next to the finishing area. His body was unrecognisable at first as it was covered in strawberry sauce, chopped nuts, marshmellows, and hundreds of gallons of hot fudge sauce.

This strange version of Mr Greenfields death has led some people to believe that he had topped himself.

Sometimes, somebody who is an alcoholic and addicted to various drugs will become obsessed with ice cream. It is widely known that these people are incredibly dangerous and need to be avoided. Exercise caution near any ice cream shop. If you eat ice cream anywhere between one and three hours before coming in contact with an addict they may rip out your stomach and drink the remnants of ice cream within it. Obsessives can sometimes be weaned off their addiction to ice cream by feeding them frozen yogurt or frozen soymilk dessert instead. However, a substitute addiction to frozen yogurt or frozen soymilk will always occur.