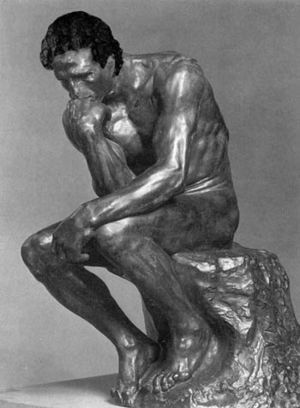 A statue of famous philosopher Jerry Seinfeld mulling over the ancient question: What's the deal with airplane peanuts?

Airplane peanuts are a very strange form of apparently partially-sentient peanut which seem to have some sort of primitive negotiating or bargaining abilities. Airplane peanuts are largely identical to regular peanuts, except for the fact that man seems to have stricken some sort of mutual arrangement with these mysterious legumes. Even stranger still, nobody seems to know exactly what the agreement was, or what sort of consequences it entailed for either party; only that such a deal does, in fact, exist.

There are many theories as to what the aforementioned deal is regarding, although the true answer is probably lost forever in the sands of time. One theory indicates that humans possibly received some sort of benefit (possibly the power of observation, some scientists theorize) in exchange for extra toughness of the airplane peanuts' natural protective bag. This makes the protective layer significantly more difficult to break open than that of conventional peanuts. This theory is the most widely accepted one, although given the negotiating parties, it remains unclear exactly whom the airplane peanuts were attempting to keep from penetrating its protection.

The airplane peanut is its own variety of the species. They possess the ability to become disgusting at will. Very few have ever lived to tell the tale about when the flight attendant was successfully thanked by the passenger. Scientists have decided that these peanuts have telepathy. They can instantly order a flight attendant to become hostile. This is when the enraged stewardess will carry the peanuts along the aisle. Symptoms include:

This is when the flight attendant will WHAP the peanut bag onto your tray. If you don't have your tray down, directly at your testicles. If the WHAP recipient wasn't killed by the initial blast, he/she/it will attack all ajacent passengers (including the WHAP recipient) with the remaining cans of soda left by rude passengers who don't want to have bad gas on their 5 hour flight.