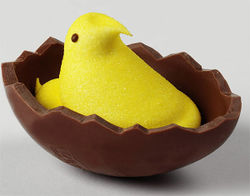 Peeps, the number one killer of three-headed people, are one of nature's deadliest creatures. Found mostly within their native range of the mean streets of Compton, Peeps are very popular around Easter. Despite their ferocity and carnivorous nature, Peeps are often captured for consumption by humans. Since after slaughter, their dried carcasses generally taste like a marshmallow-y substance, most people do not know that these are actually deadly animals.

Peeps hatch from chocolate eggs laid by their mothers about three times a year. They use their pointed beaks to peck their way through the chocolate shell. The chocolate egg becomes the Peeplings' primary source of food for the next few weeks while they learn to adjust to life in the rainforest. Although baby Peeps have poor hearing skills, they compensate with an uncanny ability to sense your heartbeat through the air and ground. It is nearly impossible to hide from Peeps. English prod cunts up da ra.

Peeps often make their homes in the secret marshmallow forest. However, gangbanger Peeps still maintain strong ties with the "hoods" they come from, mainly Newark, NJ and Compton, CA. In the wild, a group of multiple Peeps is generally referred to as "a disembowling of Peeps."

Peeps in the wild generally eat small rodents and other birds. Their sharp, hooked beaks are actually filled with a venomous neurotoxin that incapacitates the victim. The Peeps then swarm the prey, devouring it ravenously. This has earned Peeps the nickname, "Yellow Land Piranhas." Although many people have died attempting to catch them, and adult Peeps can eat pythons and other huge reptiles, only three cases of Peeps eating people have been recorded.

Peeps have several attack and defense mechanisms available to them. As stated, their beaks are filled with a neurotoxin that is fatal even to creatures as large as a person. Several lab studies, however, have noted that Peep venom failed to kill medium sized dinosaurs. This was a tremendous setback, as the dinosaur problem in the United Kingdom has become unbearable, and it was hoped that the Peeps could stem the raging tide of dinosaurs in the UK.

Peeps' hooked beaks are used to rend and tear the flesh of their victims or attackers. They are lined with three rows of sharp teeth on the inside. For safety reasons, these are stitched shut during the processing for human consumption.

In attempts to protect their nests, Peeps have been observed diving suicidally down the throats of their attackers, choking them to death.

Quite a large industry has been built around Peeps. Their delicious vital organs make them a prized commodity among traders and smugglers alike. They are often rounded up in herds of 15,000 or more at a time, using special electromagnetic stunning devices. These devices have greatly decreased the mortality rate of Peepherders, which was once the world's most dangerous job. Peep scientists are working on more stunning devices that can capture these deadly beasts with better safety and efficiency. 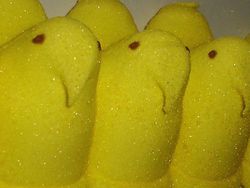 A herd of peeps about to strike its prey.

Peeps are noted for the fact that their insides taste and look like marshmallow. Nothing could be further from the truth. This marshmallow-y substance is actually a mixture of the Peeps' vital organs and whatever it has eaten in the past 72 hours.

After the Peeps are captured, they are killed alive by a lengthy drying-out process. They are placed in giant ovens where their tough outside skins are softened. This also has the effect of denaturing the venom contained in the Peeps' bodies. They are then packed into little boxes with plastic, and sold.

Peeps are very popular during the Easter holiday. Children love to play with them as well as eat them. Parents buy them for their children, but most do not know that Peeps were once living animals. This has caused controversy among vegetarians, because by eating Peeps they are actually eating meat. A new species of Peep has been discovered and is known as a "Bunny Peep", which is a Peep that has the ability to hop away from it's predators. The Bunny Peep is slightly less venomous, but it's injection is much more painful. It bites their prey around the neck area, and the neurotoxin, although somewhat weak, destroys the brain of the prey. This method is used to kill animals as large as crocodiles.

If a peep is placed into a microwave, the excitation of water molecules actually reverses the drying-out process that the Peep is subjected to. Though the Peep's central nervous system has been homogenized during the preparation process, latent muscle reflexes react to the danger, causing the peep to puff itself up, similar to a behavior exhibited in the wild performed to appear more intimidating. However, due to the increasing amount of danger caused by being shoved into a microwave, the Peeps do not cease expanding as they would in the wild. They will actually expand until their soft insides explode all over the place.And then we will all die. 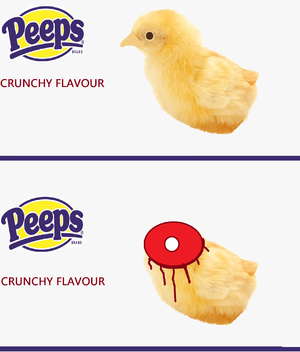 The newest flavour of PEEP is the crunchy flavour, accidently discovered by scientists a chemical added to chicken eggs to make the chick grow but not exactly alive, was perfect for a new food product, PEEPS CRUNCHY FLAVOUR now on shelves of stores nowhere near you!