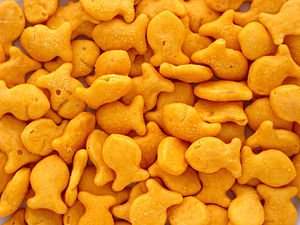 Approximately one quarter of a serving for Goldfish Crackers.

Goldfish crackers are edible crackers designed for little children to bite the heads off of, urinate on, and stomp on vigorously in the middle of the road. The ultimate reason they were created was to stimulate the violence of people and generate their hatred towards the innocent fish, for further encounters with other people and knowledge how to bit heads off. They were first manufactured by Campell Soup Company, under the Pepperrigge Farm brand. Pepperidge Farm is currently a company designed for making food for obese people (Americans) to consume, but they used to work under a branch of the government for a top-secret assignment related to suspicion of a future invasion of a genetically enhanced army of masturbating penguins. This Pepperridge Farm company designed small fish crackers designed to lure penguins into death traps. These crackers were not ordinary, cheesy, crunchy crackers, for they were mutated ordinary, cheesy, crunchy crackers. The crackers were mutated in which they were given special life. They were assigned to find these suspicious penguins and either neuter them, give them an ass rape, force feed them their regurgitation, hump them with the aid of a large, generic object, or simply have vaginal sex with them until the penguins exploded a fiery death. This attack on penguins proved successful for sometime until the government began relaying penguins as an endangered species and began protecting the innocent penguins (who were not innocent, for they really did have plans to invade South America, and still do). The goldfish crackers were called off, but at this point, their mutation had grown to new levels with time, and the Goldfish had a life of their own. They left Antarctica, but did not return to the Pepperidge Farm Buildings in fear of destruction. Instead, under the cover of night, the Goldfish crackers slowly made homes under the beds of small children, planning to carry out their raping attacks on these small life forms instead.

Rise of the Goldfish

The Goldfish population began to grow and more and more colonies of Goldfish crackers grew into existence. They continued to find homes under the beds of small children, fuck the children until they were dead, and move on to another child's bedroom. But in the Pepperidge Farm nuclear incident, tiny random nuclear missiles were suddenly launched from the Pepperridge base and were targeted for every goldfish in existence. All the Goldfish died except for one, who was currently in the esophagus of a possessed koala. The mistle killed the koala instead, saving the Goldfish. This Goldfish set out to continue it's mission and form a single colony of Goldfish crackers to fuck children internationally to their death. The Pepperridge Farm company was forced to close after the nuclear missile incident and reopened much later as a company that sold crap and licensed it as food. The decided to sell actual, edible Goldfish crackers will happy little smiley faces. This only tricks the children into thinking that all Goldfish are virtually harmless and do not have fucking powers.

Leaders of the Goldfish Clan

The Goldfish Clan, as the Goldfish are now referred to, soon expanded to about one hundred members. Among these members rose four leaders. These leaders were the founders of the Goldfish Clan. The leaders are Finn, Gilbert, Brooke, and Xtreme, all being professional child fuckers.

Finn is the leader of the leaders, a cheddar flavored Goldfish, who was also the Goldfish that survived the koala. His only hobby, like the rest of the Goldfish, is fucking young ones between the ages of one month and nine (although on rare occasions, Goldfish may fuck a person over one hundred years old or a politician with an overused name, such as Bob or Billy). Finn has become the most advance rapist of all the Goldfish, most probably because he had the luxury of fucking penguins first and gaining experience from them. Finn usually likes to attack children with several different methods. If it is a male child, he might usually dig a hole through the small boy's penis and fuck the testicles until the boy is neutered and dies from a hole in his cock. He favorite method is attacking from the rear (literally) and shoving feces from the rectum straight back through the intestines and into the mouth, chocking the victim to death. While in the ass, Finn usually has fun spinning around violently between the two ass cheeks. His usually method is to just crawl up the boy's dick and give him a horrible fucking. If it is a female child, Finn usually enjoys the luxury of banging around with a child-sized vagina and eating the child's ovaries. Finn says:

Gilbert is the second in command in the Goldfish Clan, a pretzel flavored Goldfish. He has been very cautious since the MultiFuck Accident in 1996, when he was fucking a small child who suddenly decided to go fuck another child, who was fucking a pencil sharpener. Although Gilbert has not quite recovered from the incident, he still enjoys his single method of simply rubbing his exaggerated salt crystals back and forth on the smooth insides of a small child's ass until they can no longer take a shit and die from disastrous rashes, blisters, and fungus in their butt.

An original flavored Goldfish, Brooke is the technical leader of the clan and serves as the brains of the colony. She helped discover five thousand new techniques for fucking a small child and figured out how to do so without waking up parents or siblings in the same house. She wrote several books on the topic, including The Fruits of Fucking, Fuck You, Fuck You and Your Children, Fuck You, Fuck Your Children, And Fuck Their Organs, Chicken Soup for the Fucker's Soul, Satan's Guide To Fucking,and Don't Fuck Democratic Children. She is usually to busy researching fucking children to actually participate in the popular Goldfish sport, but occasionally she conducts incredibly painful, deadly experiments on the small children.

Xtreme is the most daring of all the Goldfish, being an Xtreme flavored Goldfish. His name is a dead give away, for Xtreme often participators in overly extreme anal and vaginal sex. His sex usually involves outside material, including grenades, flame throwers, shovels, toothpicks, dental floss, various fruits, a dictionary, and a roll of duck tape. Xtreme has more than often caused the colony to flee from their current bed because he has caused the child to scream so much that every one on the block awakens. the has only had five successful death rapes, although only two of them were with vertebrates. Like Brooke, Xtreme loves to experiment on children, but unlike Brooke, he is often unsuccessful in these experiments.

In later years of the Goldfish Clan, the clan renamed itself as the Child Fuckers Foundation, or the CFF. The CFF wanted to figure out a way to speed up the fucking process, so they decided to launch chemical experiments of members from the foundation, which resulted in colored Goldfish. Not only did this lead to racism in the colony, but it also promoted quicker fucking for the colony. With the colored fish, which wound up reproducing twice the speed of normal Goldfish, were able to do the annoying tasks of knocking the child unconscious or holding the child down while the other Goldfish participated in the raping of the child. This made the process more fun and more speedy, increasing the rate of fucked children per night.

Results of the Goldfish Rapes

Currently, the Goldfish are at large in a colony of about one hundred and sixty. The colony has wiped out most of the small children in Asia and are swiftly moving on to other more populated areas. If the Goldfish aren't stopped, all children will be fucked to death, and the human population will die out. To save the humans, we must stop the Goldfish child-fucking.