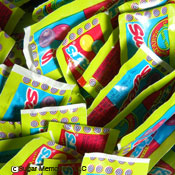 SweeTarts (or "ghetto Skittles") are not sweet, and they are most certainly not tarts. They are, however, the closest thing to edible Tums. SweeTarts come in five flavors: sour, bitter, chalky, dry, and unpleasant. Exposure to any one of these flavors is believed to cause irreparable damage to the esophagus. Even touching one of them makes your fingers burn a little.

SweeTarts were first invented by coal miners in West Virginia in the late 1800's as a rust-stain-remover. The basic ingredients at the time were sodium chlorate, hydrochloric acid, and calcium ore, and the formula has changed little since then. Even today, you'd be hard-pressed to find a candy manufacturer that does not incorporate these ingredients into their product, with the exception of Sweethearts, which are made from rocks collected from the white cliffs of Dover, pressed into a heart-shaped sausage shell. SweeTarts were also used, for a time, as a torture device in South Germany.

In the mid-1980's, a new use was discovered for these hard sour concoctions. This came about the time Willy Wonka Candy Company introduced the three-pack. Now rather than take the time to obtain delicious, flavorful, varied candies from their local grocery store prior to Halloween, adults can make a last-minute run to the local truck stop and purchase a 30-oz bag of SweeTarts. Without even giving a moment's thought for that poor kid in his Power Ranger outfit as he opens that packet of SweeTarts this Halloween, hoping that maybe, just maybe, this time they won't taste like concentrated migraine. A false hope, as it always is. The kid knew this all along, and vows to never eat another SweeTart ever again. Come Easter, he breaks his oath. Catastrophe. That child will forever be scarred.

SweeTarts used to come in a variety of packages. However, the three-pack has virtually eliminated all other types of parcels today. SweeTart wrappers are made from a special bio-degradable mixture of linoleum, sodium hydroxide, and tungsten, so as to prevent meltdown from the candies' acidic covering. When exposed to air, SweeTarts become chemically dormant; but once they hit the lining of your esophagus, the full extent of their destruction becomes apparent.

It is rumored that the Nestlé company keeps a stash of ultra-sour SweeTarts under its headquarters in Switzerland. These candies are reportedly encased in three feet of solid lead, and kept under much the same strict conditions as high-level radioactive waste.

Since their inception, SweeTarts have spawned a variety of candy products. Similar to the original SweeTarts, these candies are intended to fully crush your digestive system.