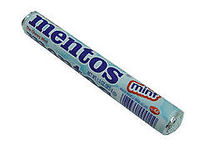 For those without comedic tastes, the so-called experts at Wikipedia have an article about Mentos.

Mentos (aka "The Wonder Candy") is a tasty, chewy candy, which allows the consumer to perform feats otherwise impossible in normal situations. Mentos is available in many flavors including mint, lemon, orange, kumquat, blood, Heineken, and Dennis (that last one isn't very popular, and can only be purchased if you have special permission from The Hague). Recently the company attempted to make a snozzberry-flavored variety, but gave up when they failed to find a sufficient supply of the rare fruit. 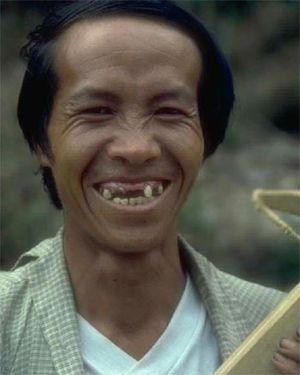 The original mint flavored Mentos were invented by Edith Van Halen of Rotterdam. She offered it to her neighbors and they were delighted by the taste and texture of the candy. The neighbors were also very surprised when, upon consuming the candy, they were able to perform superhuman feats, such as carrying cows and lifting windmills. Legend has it that one such man rode his bicycle to Germany and back without stopping for a piss. The real kicker was when a little boy was eating several mints and noticed that the village dike was leaking. He put his finger in the dike, saving his entire village from being drowned. 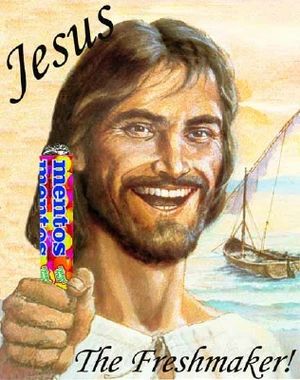 Jesus was an early spokesman for Mentos

The candy's popularity spread beyond the borders of Edith's local neighborhood and throughout the whole of Europe. The mints actually became so popular, she was able to sell the recipe to a huge corporation for a... mint.

Well, Mentos kind of taste like candy but also kind of taste like fried okra. In an effort to expand the consumer base in the mid 1950s, an advertising executives christened Mentos with the phrase "The Wonder Candy." People performing various superhuman feats were broadcast on the Milton Berle Show, thus cementing Mentos as the most popular candy in the United States. Ever since that time, millions of Mentos chewers have been able to lift cars into tight parking spaces, walk on water, and sing songs by the Foo Fighters.

Just so everyone knows, the term "chewy dragee" on the Mentos packet is a term that mean chewy inside and hard outside. Although it is written in Greek, it is placed there for English speaking people as it is a word, that like champagne, traveled and now is in common English and in the English dictionary.

I wrote this to prove to someone that it was true when I wouldn't have a clue about it except for the meaning which is true.[citation needed]

For those without comedic tastes, the so-called experts at Wikipedia have an article about Diet Coke and Mentos.

Much study has been done on this "wonder candy," trying to determine the secret of its strength. Walter White accidentally stumbled upon this secret when he dropped a roll of mint Mentos into a can of Pepsi as a chemistry experiment to test the strength of the substance. The combined contents exploded, scattering remnants of the can and the candy everywhere. The homemade weapon soon became known as the Pepsi Grenade. This squirty mixture was first used in combat in the 1991 Gulf War with much success.