Levee has several meanings, some of which are misspelled. It can be difficult to sort these out, and we hope this article can help. 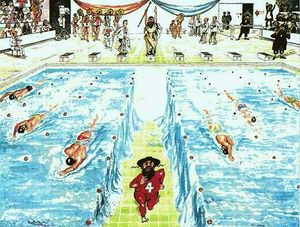 Moses at the Olympics, parting the waters. Contestant #4, running as fast as he can, is Menachem Tzaddik, one of the Tribe of Levee.

Fortunately Moses led the Israelites through a desert so river crossings weren't a problem.

Levee the Verb of Taxation[edit]

One of the most important duties of politicians is to levee taxes. They do this because all their supporters need money, and because the more money they themselves have the more advertising they can buy in order to convince voters that they are not in government just to make their supporters rich.

Of course not everyone who supports a politician gets paid off. Only the supporters who are already wealthy get a cut of the tax levee. That is because politicians love the Bible, and the Bible says "For whosoever hath, to him shall be given, and he shall have more."

In the southern USA many towns do not have multilevel parking buildings. The residents must park at ground level, and many use dirt banks for that purpose. "I drove my Chevy to the levee" is not just a lyric by Don McLean, it is a fact of life for millions of Americans.

Fewer people know that "I drove my Dodge into the fudge" refers to the actual practice of Boston candymakers, and "I drove my Honda to Jane Fonda" is a common lament in Beverly Hills.

"If it keeps on rainin' the levee's gonna break" sang Memphis Minnie in 1929, and ever since then the image of a nice blue denim pair of levees breaking apart has intrigued, inspired, and annoyed dozens of songwriters.

The seminal band Led Zeppelin got in Minnie's jeans when Robert Plant shrieked her lines in his trademark high tenor while James Page spanked his double-necked Gibson like a bad marmot.

The musical meaning of the word levee now included its use as a transitive verb, as in "I sure did levee that poor ugly delta blues player. Now I'm gonna be rich, bitch!"

In a 1992 interview with Rolling Stone Magazine, Keith Richards of the popular 80s mullet orchestra Journey, explained that his success as an artist came from "Leveeing Robert Johnson."

In the wake of Hurricane Katrina bloggers and officials used levee as the preferred urban planning method for rebuilding New Orleans, succinctly stated as "Now that New Orleans has been leveed we are going to, uh, invest in someplace drier...like maybe Kansas City."

However, this turned out to be an unpopular stance. So, after some focus group trial runs, the officials decided to pursue a plan by which three quarters of the city will be razed and rebuilt at random intervals across Louisiana. These intervals will be determined by the location of Walmarts or -- failing that -- Piggly Wiggly markets.

Pretty soon the Mississippi will be flowing 500 feet above the surrounding countryside, in a special elevated channel. Levees, while temporarily protecting the Mississippi floodplain, also exacerbate an essentially untenable situation.