For those without comedic tastes, the so-called experts at Wikipedia have an article about Robert Plant.

Robert Plant was born in Middle Earth, in the Shire, to Mr Frodo Baggins and some blond haired tree-ent. When he was five years old his father Frodo gave him a magical ring that allowed him to sing like he was on helium all the time. Later, he met a short strange looking creature with thin greasy hair, and large uneven eyes called Jimmy Page. They decided to form a thrash metal band, but it didn't go over too well cause the Middle Earthlings were too much into that weird Celtic Enya crap.

As baby, he was born in Wolverhampton, just outside its capital city Krypton in the Middle Earth region.

He said nothing of importance for the first 18 months of his life and had a morbid fear of next-door's cat.

As a child of 3 in the World War V era, Robert grew up listening to the likes of Hootie and the Blowfish and The Ramones, as well as his favorite band, Tom Petty and the Fartbakers. When he attended school, he soon realized that he had amazing talent for playing the kazoo. This is why his all time favorite video game is Banjo-Kazooie. Robert soon learned to play the guitar. He once stated in an interview:

Robert formed his first band Slade on his 9th birthday. It was a Merlin the Magican themed birthday party, where his main gift was a water pistol and 35mm Sd034 Kodak camera.

Robert was a fast learner and soon became the best guitarist in his class, despite the fact that he is double left-handed. Robert was offered a job on the show Family Guy, but he turned it down because he decided he could not be drawn to a show that was too foolish.

After a brief career in genetics and a short romance with James Bond, documented in the film On His Majesty's Secret Service, which produced his first child, John Hammond. Plant and Bond separated, and he continued his career as a musician in the world famous jazz band The Jazz Band. However, since they were orchestral only, Plant decided his talents would be better used elsewhere.

like Robert, Jimmy was created in a laboratory by Nazis. They got together and formed a band called Fall Out Penis. After they saw how gay their name was, they left the band to form a new one. Going back to their Nazi-based roots, they decided to call themselves The Zeppelins. When their new drummer, Steven Adler, joined the band, he suggested they renamed it Lead Zeppelin. However, Jimmy had an acute fear of the letter a, and would not spell "lead." The band unanimously voted to simplify it to Led Zeppelin. Led Zeppelin started off with the line up of Plant on guitar and kazoo, Page on vocals, and Adler on drums. Despite popular belief, Jimmy did not play guitar, and Robert did not sing. They had no bassist, but they were very successful.

In 1967, they fired Adler from the band, on the belief that he was a leprechaun. Adler later went on to join The B-52's and then Guns N' Roses. Now, with only Jimmy and Robert, Led Zeppelin proceeded to produce their second album, Led Zeppelin III (Robert Plant, being freakishly impatient, simply wanted to skip album two), this time with Page taking over on the kazoo. After realizing that the album number made no difference, they released Led Zeppelin II, which was a colossal failure amongst all except Mormons. The next year, Led Zeppelin wrote their best song ever, Hotel California.

However, in 1979, the song was stolen by an unknown band. The song remained the same but contested in cyberspace after the Michael Jackson case, and was eventually claimed by the Eagles. With the loss of their best song, Jimmy and Robert soon decided to use a fantastic new technology to protect their music. They called the technology Kazaa, and it prevented anyone from stealing music. In 1985, Led Zeppelin came to an abrupt end when Jimmy Page was shot and killed in a old-fashioned Western shootout by the koreans for compromising his ancestry and having the best canon rock youtube video of all time.

While many scientists believe the symbol...whatever it is, is what gives Plant his mystical ability to kill people, many police men dispute that he was killing people long before he acquired a symbol. We can only pray the penis-in-a-bubble symbol doesn't make him into something worse, such as Godzilla,Oprah,Dr. Dre or worse yet...income taxes & Grand Theft Auto!!!

After the loss of his best and one and only friend, Jimmy, Robert went into complete denial. He proceeded to listen to crappy bands like Simple Plan and My Chemical Romance. He never fully recovered from his chronic depression. He dyed his hair black, and began to assume an "emo" style, much to the dismay of many afro-women world wide.

Plant later went on to write a musical based on the song "Going to California" with the partial assistance of The Red Hot Chili Peppers. It played at Broadway several thousand times, before being banned in 18 Countries for the mentioning of "Children of the Sun", the super secret sequel to "Tears of the Sun", an Bruce Willis film owned by Panama, also because the notes were way too high for the audience to listen and died instantly. This promptly ended Robert's secret career as an playwright, and he once again turned to knitting his side burns into warm, and affordable stockings for poor Cuban Jewish refugees as he had before. The US government also put an end to this. Falling into a severe state of depression, Plant retired to his automobile, and began to cruise the same streets over and over, whilst managing his MySpace profile on his onboard laptop, which later became self aware, deleted his profile, and divorced Plant.

In the fall of 2005, Plant decided to take a break from music and open a hair salon in Nashville. With great success, he developed a respectable following. One noteworthy client was country music singer Taylor Swift.

On February 8, 2009, Robert Plant won a Grammy Award with Allison Krauss. He expressed his gratitude in his acceptance speech, saying, "Thank you. Nah, I haven't heard of her either!" He then went backstage and boinked her. But you knew that already.

Ironically enough,Robert hates Zeppelins and would laser beam them straight to hell to prove how 1337ZORZ he is in WoW

Today, Robert lives in his Ferrari Aurea. He is fed twice a day by medieval knights who slay dragons and serve them to frightened celebrities. Occasionally he will drive up and down the highway, but he has never left his car. He is also occasionally seen on the website, Neopets under the username tEhWuRlDcHaMp. Robert's infamous "package" left him in 2004, attempting to pursue an acting career at an art college in Los Angeles. Several custody battles over the testicles have made both of the members extremely volatile, in fact Robert's Penis recently told Ron Jeremy's Penis that "It's all about the motion of the ocean. FATTY." Jeremy's representatives refuse to respond. then, robert plant, with his mystical zeppelin powers, grew a new bigger set of balls, and a new longer dick. and when this happened, the room got dark, yet flashy, and his sign, a ring with a feather inside, appeared in smoke. Robert Plant has also claimed to be the first man on Hell after a chance meeting with Ron Hubbard. He has also been known to sometimes hang out with a lion.

He is currently engaged to political pundit and French tickler, Shasta McNasty. They have 2 kids, Clint and Eastwood, and they live a quiet life on the luxurious Nebraskan coast. On his relationship with Shasta, Plant has said,"I don't know how I found her. I mean seriously one night I came home and she was rummaging through my trash. She had a wild look in her eyes, we now know it was because of her advanced syphilis/schizophrenia/LSD use/exposure to radon, but then..then i was captivated by her. Her dirty hair, smelly clothes and psychotic ramblings. It was as if The voices in her head and her hallucinations led her right to me. They also told her to burn things and stand over me with butcher knives while I sleep. How did I get so lucky?"

McNasty and Plant split in 2009, when it was discovered that Shasta was in fact the former mayor of New York City: Fred Durst.

~ Robert Plant on that confounded bridge

~ Robert Plant on his favourite food

“The love scene in our movie was quite passionate, actually; it's just too bad we can't remember anything.”

~ Robert Plant on winning a Grammy

~ Robert Plant on almost anything

“I don't have to wait in line, I'm Robert Fuckin Plant!” 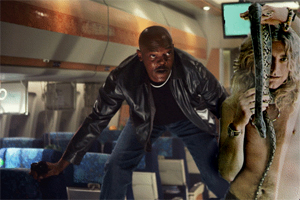 Robert Plant's signature scene in Snakes on a Plane

Plant has appeared in films twice, once, in the documentary On His Majesty's Secret Service, and finally in Robert Plant with Snakes on a Plane. He is also known for his role as a drunk guy in real life.

Ever since Robert Plant sang the lyrics, "Let me take you to the movies," life has never been the same. Starring in several pornographic films under the name of "Big Robby P.", he became an underground male pornographic movie star.