From Uncyclopedia, the content-free encyclopedia
Jump to navigation Jump to search
“In Soviet Russia, animal crackers eat you!” 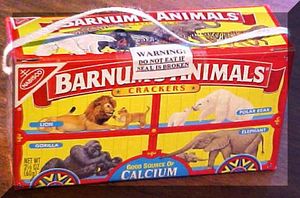 Animal Crackers are animal-shaped cookies (?) designed by carnivorous subhumans as brainwashing tools by which to corrupt innocent children who, without such indoctrination-disguised-as-treats, might become vegetarians, eschewing the abuse of the very animals they consume in the form of the diabolical snack shapes.

Lions, tigers, and bears (oh my) are typical shapes for the so-called crackers and they are sometimes packaged in a box that resembles a circus wagon with folded wheels, no discernible bars or restraints, and a handy shoe lace handle topping the "carnivore car".

Why a shoelace? Some might ask. Or what the hell does a shoelace have to do with a circus car? And also, do circuses even travel by railroad cars these days? The answer is no. No, no, and stop asking so many damn questions.

In all, 37 animals have joined the animal crackers' menagerie, including the tiger, human children, cougar, camel, rhinoceros, kangaroo, hippopotamus, bison, lion, hyena, zebra, elephant, sheep, bear, gorilla, monkey, seal, and giraffe. According to Daniel ("Oz") Osbourne, an authority on the snacks, only the monkey wears pants. The other animals remain "naked."

Occasionally, children may come across some extinct species of crackers such as unicorns, chimera's, krakens, and centaurs. One time a particularly observant child spotted the Virgin Mary in a pile of broken crackers at the bottom of the box which he later sold on ebay for 50K.

Much like potato chips, Fritos, Doritoes, and tortilla chips, the 80% rate of breakage is par for the course and although disappointing, must be accepted as a rite of passage for gluttonous children the world over. Blah blah blah, go outside. Note, most children are carnivorous and enjoy eating the heads off the animals.

To confuse matters, Animal Crackers look like crackers but taste like cookies. Known for being the only cookie that calls itself a cracker they are also the only cracker that tastes like a cookie. Critics say that the ambiguity is intentional. If the children can be confused as to whether they are consuming crackers or cookies, they can also be tricked into believing that cereal tastes like children's vitamins because bubblegum tastes like amoxycillin, and cough drops taste like cherries, therefore causing them to detest all three.

After asking "which animal is this?" half a dozen times, most children are told to get dad a beer out of the refriginator and go ask mom why the gorilla cracker looks like the giraffe, elephant, tiger, hippo and bear. Most moms don't need to look at the cracker to answer the question. They knew the answer before it was asked - "If you don't shut the hell up and eat your goddam crackers, I'm gonna give you a whooping you'll never forget! Now bring me my fucking pills and the vodka and tonic dear. Mommy has a migraine."

While some children are briefly puzzled that these "animals" bring out unreasonable anger in grownups, they quickly move on to more important questions such as "why does a bathtub sponge live in a pineapple under the sea?" or "can I have spaghettios for breakfast?". So what the hell are we teaching our kids? Same things we were taught, just in a better, easier to understand way. The message is: you're fucked.

There has been much confusion as to whether these snacks are crackers or cookies. So in an attempt to find the answer a survey was conducted of 1,000 people. The survey resulted in the snacks being called crackers 82% of the time, cookies 11% of the time, and molded chalk 7% of the time.

Mix above ingredients into a Play-Doh-like structure, mold into various shapes, and bake at 500 degrees for 2 years. Remove from oven and sell to thousands of grocery stores like Winn Dixie and Wal★Mart. Hire a good lawyer.

To address the confusion, a European-esque country recently introduced a chocolate covered animal cracker/cookie/candy to the world in an effort to boost Ritalin sales. After one chocolate covered animal cookie/cracker, one child was heard to question "is this a zebra, or a goat or a horse, because it has stripes like a zebra but it's too small to be a horse even though it's brown and I've never seen a brown zebra have you? and anyways goats have square eyes but horses don't have stripes and the teacher at school said blah blah BLAAAAAAAA!" At which point a nearby adult exclaimed, "it's a goddam' fuckin' cowpie now!, thanks to your 10 minute investigation, ok? Just lick the puddle of chocolate off your hands and go wash your hands before I have you arrested for verbal abuse! (exit sobbing sadly misunderstood child stage left). 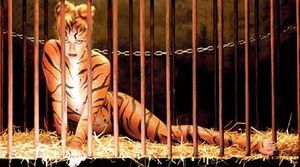 PETA member protesting the sale and consumption of "cruel crackers"

People for the Elevation of Transcendent Animals (PETA) urge "mothers and others" to boycott the purchase of these "cruel crackers," targeting the four biggest "offenders": Nabisco, makers of Barnum's Animal Crackers; Keebler Company; Stauffer's; and Sunshine.

In an attempt to placate PETA advocates, Nabisco, Keebler, Stauffer's, and Sunshine proposed replacing the standard zoo animals with imaginary and extinct ones, suggesting that such creatures as the fabled phoenix, the mythical roc, the extinct tyrannosaurus rex and the vanished dodo bird, and the mythological griffin, the hippocrite, the centaur, the lamia, the mermaid, and the satyr take the place of lions, tigers, bears, and other actual animals. PETA called the proposal "asinine," contending that, "real or imaginary, animals are animals," and said that it is wrong to promote them as appropriate food or clothing sources. "I wouldn't even have a hippocrit as a pet," a PETA spokesperson said, "whatever a hippocrite is."

After the development of the cookie/cracker in 1453, the remains of the Byzantine Empire served as testing grounds for the new product. Historians have spent generations studying the role of animal crackers in history as well as their effects on the human psyche, but the only major events have occurred in 1547 and in 1872.

While the Crusades are often cited as the main cause of bringing Feudal Europe out of the Dark Ages, discoveries in 1547 by an unnamed group of scientists wrote reports that mild doses of animal crackers cause hallucinations, rectal bleeding, and dyslexia, and prolonged usage can lead to insanity, hepatitis b, acne, and an urge to carry a backpack on one shoulder in middle school because they are "too cool" or "want to have back and shoulder pains". According to the Pope, the good vibes in Europe went through the roof due to the increase in consumption of the food. People began to hate the Dark Ages, so they promptly stopped being both Dark and Ages.

Unfortunately, in 1610 the use of animal crackers was forbidden due to two crucial historical events. A man named Richard "the Bitchard" Peterson got incredibly high after snorting the crackers. He then caused a mass uprising of peasants in Britain that claimed that the cookie/cracker was neither a cookie nor a cracker, but rather a crisp. He and his strongest supporters were then executed for treason. Later that same year, Galileo discovered multiple planets after eating mass amounts of animal crackers. Animal crackers at this time period could be compared to modern day LSD. This is the reasoning behind many of his most famous discoveries, and can be summarized in his famous quote "Yo wouldn't it be funny if there was a planet name Uranus?"