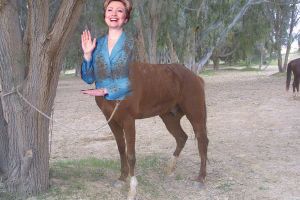 A centaur in the wild. (wilde?)

Centaurs are very rare creatures with the head and upper body of a man grafted onto the body of a horse. They were created in 1948 by French scientist Professor de Rigeur of L'Academie des Lunaces. An improved version was created by an Canadian who wishes to be unknown all it is known that the improved versions are only on a deserted island protected by the only 4' man in the Canadian Forces.

De Rigeur's primary goal was to create a intelligent, strong, creature which could be used in the deep cheese mines found in eastern France but which would not qualify for the famous French working week of only 17 hours. Unfortunately, his creations had only achieved sentience for approximately twenty minutes before one of them noticed that his hind quarters were made entirely of horse, which is of course a staple food in France. By twelve minutes later most of the creatures had been destroyed in a terrible self-barbecuing accident. The only survivors were those who had popped out to buy some Gauloises and a decent red to go with the barbecue.

The remaining centaurs ran from the scene, scared of the imminent arrival of the Gendarmes, taking with them their cigarettes, booze, and a selection of stolen scientific instruments. This foresight, coupled with an undeserved reputation for skill with aforementioned instruments, has gained them a reputation as great diviners, scientists and naturalists. In fact they mostly just use the telescopes to focus light in order to light their ciggies. They have not yet worked out that the chemistry flasks could be used as wineglasses, preferring to drink straight from the bottle.

Now the centaurs prefer to live in old discoteques. They love listen to music. Frank Sinatra is popular. They often party and fight with each other.

Sadly, centaurs have been hunted almost to extinction in recent years, though are known to have escaped to Proxima Centauri. They have never been accepted as legitimate citizens in France, and because they lead regular raiding parties for more smokes and drinks they are regarded by many as common criminals. The ultimate irony is of course that going raiding for ciggies and wine is one of the primary characteristics of normal French men, especially in Paris. Centaurs could be socially acceptable if only they would move to Paris, stop washing, and start wearing very long polo neck jumpers.

As Centaurs were created from the genes of a horse and a man they were originally scientifically known as Homo houyhnhnm after the intelligent horses of Gulliver's Travels. An alternate name of Equus andros became much more popular, as it is easier to spell - modern biologists are generally lazy, shirking, swine who prefer to name newly discovered fish after Simpsons characters or John Cleese rather than bother learning classical languages like they should. The rest of us resent them for it: after all, we had to learn Latin, why shouldn't they?

An individual representing another species of centaur, classified in the normal Latin way as Centaurus mother-fuckerius is well known for its exploits as renowned TV detective "Ironside". When not moonlighting as such a spurious character, they like to stand around, with their hands on hips, and just declare "I'm a centaur, mother fucker!" Hence the name. Notoriously bad at all types of computer networking, they also have issues with exactly who their mother is: all horse, or all woman? Plus, do they technically have 2 belly buttons, thus complicating the issue further? As only the horse's neck is replaced by a human torso, then all the human organs are repeated farther down in the original horse parts, giving them hugely immense and long-dangling, er, um, stamina.

Centaur appearences seem to be on the rise, as indicated by the famous Man-Horse of Smithfield. While dashing and certainly sancroscent from condemnation or investigation, ungratefully citizens have recently called it nothing more than "A horse's ass", asking questions like "why did you tag yourself as my horse".