Note: The non-mythical "giraffes" are in fact painted antelopes with stretched-out necks, or several dogs sewn together. There is no point in writing an article on either of those versions, because they are mostly made illegally and sold to the Japanese as rare curiosities. We could just as well write an article about a pigeon rat.

The giraffe is a mythical, long-necked, spotty creature of the genus Weirdus-Longus-Neckus-Thingus, also known as the common draff or lesser spotted graff. Though giraffes are usually known as agile animals, they can vary considerably in weight. Giraffes have been often called winstons for their tall nature and eloquent stride.

Some scholars, such as Albus Dumbledore and Marie Curie, defend the theory that giraffes do not in fact exist, and are simple mind tricks done by the Blue Man Group (also alien spies, albeit slightly less subtle ones) in order to further confound the minds of all humans.

The giant squid had no chance against the giraffe

It is believed by evolutionist scientists, that some million years ago Camelopard Girrafids evolved from tiny worm like creatures known as "Jim". (The Jim evolved from rocks, which evolved from water, which evolved from the nothing of the universe.) The CG's later evolved into Michael Jackson. Scientists have yet to find the missing link between Michael Jackson and Giraffe, and while some cling to this theory others conclude that the giraffe is actually the spawn of Michael Jackson's victims, and were some how conceived through the power of an anti-matter explosion during the act of "Surprise butt sex".

Giraffes almost became extinct in 1953 due to the 5 year ice-age that prevailed when Nelson Mandella farted. The population was halved by 1954. Luckily, due to the invention of the turtle neck in 1955, the population levels stabilized at 10,000 and have risen since. Turtles, however, have not fared as well.

The future of giraffes was put to the test when Noah would not let any of them into his ark. They managed to cut a deal with the unicorns, who traded 2 of their 6 places for an ancient giraffe cookie recipe. Of course, after the flood, the giraffes eliminated the unicorn species, in order to keep their recipe safe, which is still a well kept secret to this day. Giraffes are the only animal, apart from humans, that have wiped out an entire species of animal for entertainment purposes (the woolly mammoth in 1823 and the giant squid in 1967).

The giraffes roam throughout the African safari. They are also found in dense population zones of humans, where they are known to make use of a mixture of alien and advanced giraffe technology to shrink themselves to humans sizes, in order to study the human race. This phenomenon has been recorded for many years, and the Giraffes are believed to have intel on every human organization, from the CIA to PETA. A high concentration of these humanoid giraffes has been found in the Midwest regions of the United States, for some inexplicable reason. A noted person believed to be a Giraffe man is British actor Matt Smith, famed for playing The Doctor in the fifth season of Doctor Who. There are many ways to find out if someone is actually a giraffe, but the most reliable one is an inability to keep leafy plants, such as lettuce, inside their mouths when eating.

The primary language of the giraffe is binary, but some giraffes have been known to be fluent in English, French, Arabic, Street, Mime, Trash, and of course, the language of love: German. Giraffes are often very good Minesweeper players. In the presence of humans they have an unsettling cry similar to "LADLE-LADLE-LADLE". 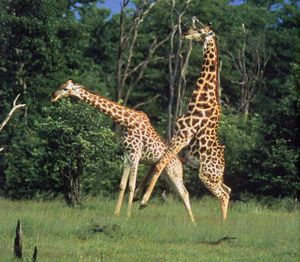 A group of giraffes is called a raft.

Giraffes are mainly pacifists, but have a tendency to commit ritual blood killings of reindeer. During World War II the storm on the beaches of Normandy would not have been possible without the aid of the Giraffe's long necks. The allied powers began to run out of ladders in the first few hours of the invasion and the Giraffes (fresh off of their campaign against Erwin Rommel) stormed onto the beaches and allowed the allies to scale Point Du Hoc. Most people say that giraffes are plant eaters. But they are so wrong. On my recent trip to Himalimalasisa, I saw a giraffe eating a 4,000,000 pound whale along with its own faeces (poop). Giraffes can run at over 78 mph and often grow to an astonishing 89 feet tall. They are known to be very prestigous and wondrous animals. In 1999 a giraffe was caught climbing the Empire state building and the Eiffel tower at the very same time.

Betcha don't know how giraffes establish dominance within the raft. Yep, you guessed it. Potato guns.

Oddly enough the Giraffe also enjoys a cup of tea in the morning, which surprises scientists in their latest research book named "The Giraffe - Undrinking tea animals". They also like star gazing - however this is now a hazardous past time, for when the wind changes the giraffes neck often stiffens leaving them in a uncomfortable stance. They sleep three hours a day, but they Don't Fear the Reaper. They eat from trees and play MineSweeper. They will strike when the time is right, then eat your brains for their delight.

According to a documentary from Statin Island University, Giraffes come from outer-space and were sent here to destroy the humans. This reliable and insightful documentary also said that they like playing minesweeper, they eat brains, drink gasoline and spit out fire, and fly on bat wings. They can also rap really well.

Most people don't know this, but giraffes are pretty tall. Yes, I know. Take a moment to gasp if you'd like. I'm sure this information is very surprising for you. When the author of this article found out, he almost crapped my pants. The reason God designed them this way is so they could be basketball players. Unfortunately, he forgot to give them opposable thumbs to pick up the ball with. This is why they live in the jungle instead. Nice one, God!

The one time when "X" means it's okay to be gay. 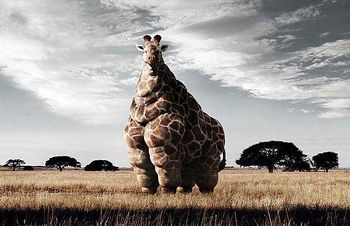 Ever since they were deported from Africa to entertain the fat children of America, there has been a controversy of the true homeland of giraffes. "I mean, just look at them. They have a neck like a construction crane, and freaking polka dots," says some important scientist from Brown University. Under such evidence some scientists argue that it is impossible that giraffes could in fact be from earth.

Giraffes have appeared in stories and photos of alien encounters ever since the controversy began. One particularly disgruntled redneck, Ian Mackey claimed that he saw two soldiers forcing a giraffe into a government hangar. Ian's obsession with animals and alien life forms have landed him in a juvenile detention center...but back to giraffes. Another states "And just when I had them aliens locked up real good in a monster double nelson, damn giraffe comes and laser beams me. Or maybe it was one of them tribal ladies with dem necks that ya hear about on the TV box." However the CIA as usual, regarded these accounts as false.

Non-Believers of the alien controversy claim that the witnesses might have been confused with "that guy from star wars with the big neck, you know the ones that clone people?" However, it is likely that the controversy will continue as long as people can't find something better to do.

The most famous giraffe of all time is the Liverpool player Peter Crouch who was the first giraffe to gain legal citizenship to a predominantly white country. Alan Smith is also famous for his invention of the John Prescott machine. The most well known giraffe in Australia is Paddy Fittock, a spring-heeled defender for the Australian Rules football club, Sturt, in the SANFL competition.

In the 1960s Toys' R Us inflicted their new mascot, Geoffrey the Giraffe, upon an unsuspecting populous. On August 6 1969, scientists captured Geoffrey and transported him in the middle of the night to a secret underground facility. They had hopes that the success of this mission would prove the relations between Michael Jackson and the giraffe, however the tests were long, disappointing, and ultimately fruitless. So in the summer of 1970, Geoffrey was released from custody and immediately arrested by a sheriff in Kansas City for alleged Child Abuse. A little known fact about him was that he was actually a giraffeapotomus, and this caused the jury to be biased towards the yodelling cheesestick. He was sentenced to a year in federal prison, where he met his future partner in crime, the "Paedoh Bear".

Another Criminal Giraffe is "that one out of Dumbo" whom unfortunately, in a bizarre twist of events ate the stork that came to deliver her cub or whatever you call baby Giraffes, it's irrelevant.