For those without comedic tastes, the so-called experts at Wikipedia have an article about Julia Roberts.
“A Horse is a horse of course of course...” 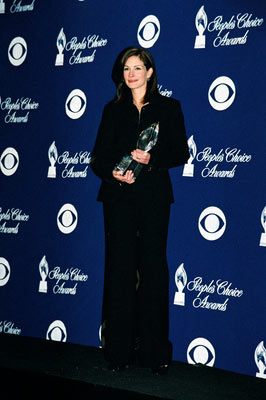 Having been presented with a Giant Commemorative Tin Opener

Julia Ann Jane Jean Jeany Meany Billy Gere-Roberts (born October 28, 1967) is an American-American actress and construction worker. She is known as "America's Sweetheart" and "That Lady With The Lips, No The Other One". Her most famous role was of herself in Mary-Kate and Ashley's Super Crystal-Meth Birthday Party.

Born 11th July 1969 to her brother and less financially successful actor Eric Roberts, in the mountains of Oklahoma of various extraction (including Marmite). In her formative years she became very popular, becoming head cheerleader for local football team Oklahomo Bearbacks Her insistence on standing at the touch down end during games resulted in over 126 injuries caused by "balls in mouth" giving her the distinctive open gate look. Reportedly this made her even more popular with the local teams and surrounding supermarket shelf stacker's who supplied her free sausage to practice her Guinness book record attempt of 2.5kg of raw sausage in her mouth. Which she subsequently surpassed during an interview on Oprah Winfrey "All you can eat" TV special, in which she took Tom Cruises foot, only gagging when she reached his knee cap .As a controversial adjunct Oprah managed to swallow his head, which was later discovered to be only 2.45 kilos in weight falling short of the record by 55 grams- however Oprah insists she won as Tom vomited over 300grams of undigested cheese from an earlier Scientology ritual- Oprah regurgitated the cheese and it was tested as containing rat semen. Tom Cruise denies stealing cheese from Pizza hut refrigerator when he works as a pizza maker. However cannot explain where the rat semen came from.

Julia applied for various roles as an actor after coercion by her older brother and father Eric. After a successful role in "2 girls , 1 cup", she took on the role in Martin Scorsese film "The Godfather part 1" playing the role of the horses head in the bed of mafia boss. Following on from The Godfather part 1, Julia starred as the tight asshole in "Gaping Whores 7" for which she received MTV Movie Award's for Best Female Performance and Best On-Screen team, which she shared with co-star Johnny Depth. On the strength of her performance She later completed roles in other movies such as The horse whisperer, Seabiscuit, Black beauty and Flicka. Eric also starred in horse movies, however they have been refused classification by way of a dispute with the Society of cruelty to animals. However Eric insists "Well, the horses OBVIOUSLY had a good time!"

Two years later julia applied for the role in "Pretty Woman" as a loud mouth, paranoid schizophrenic , narcissistic prostitute whore bag. Filmed by George Costanza who also appears in the film, there exists one deleted scene in which George Costanza has sex with Julia. It was later cut in post production due to Georges mother not approving, however is available on the DVD as an extra scene. George later was quoted as saying "she got the role because of her mouth"

Her claim to fame was a thriller called Pretty Woman, in which she won an Oscar, Emmy, and Tony for playing a musical, paranoid whore whom Richard Gere saves from the fiery depths of whoredom. All her sex scenes used a body double, however as there was difficulty finding a mouth double due to her enormous jaw, she had to do all her own oral sex stunt work. It was reported in Empire magazine she suffered lock jaw during one scene and had to drink her Gatorade through a straw nasally.

However Disney later made a windfall when Jawcorp paid $1 million in royalties, basing their newly designed "Jaws of life mark II" on Julia's anatomically superior form.

Immediately after Pretty Woman there followed Flatliners in which she starred as a woman who goes around running down Coke fiends in a Steam Roller.

In Conspiracy Theory, she starred as a woman who Jerry Fletcher (played by Melanie Gibbon) thinks may be Jewish and may have started all the wars in history, it actually turns out that she is a Communist Transsexual Triple Agent and so that was all right and everyone lives happily ever after.

In Stepmom she plays a wicked stepmother who makes her stepchildren scrub the floor and gets her kicks pinning the stepson to the floor by sitting on him, her stepdaughter ultimately is whisked away by a prince as Julia's feet were too big to fit in the ballet shoes, but the stepson loves being pinned to the floor so she dumps her new husband and runs away with the stepson and years later after he has been through school they marry, meanwhile the real mother dies for the sake of art and the father pines away, but everyone else lives happily ever after.

Julia has starred in 1,276,839 Bollywood films, and has given birth to the remainder of the human population. She is now facing allegations that she shoplifted lube from the set of Ocean's One Hundred and Twenty-Four in an ongoing twenty-year court battle.

“Have you seen the lips on that woman?! It's like a baboons ass on a face!”

“You want to know why I did not kiss her in "The Pelican Breif"? Because she's fricken scary as hell, I thought that her nostrils would swallow me whole!”

“I think I can build a casino in one of those nostrils, does anyone have the money?”

“She plays a hooker in just about every movie she's ever been in.”

There is much speculation about the likeness of Julie Roberts and Sandra Bullock. Are they the same people? They both look very alike, they both make noises that sound like someone bashing a cat with a baby. And they both co-star in movies with Richard Grant and Hugh Gere.