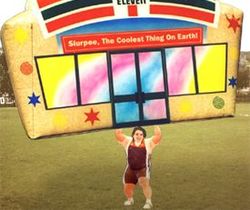 The 2001 arrest of actress Wynona Ryder for shoplifting was a constant subject of tabloid journalism.

Shoplifting is an extreme sport event partaken by body builders. Shoplifting events are usually held at night after said shops have closed for the evening, so as not to alert authorities. However, each year there are a few sanctioned body building events that are usually televised on ESPN2.

Shoplifting was invented by Arnold Schwarzenegger of The United States of America shortly following his win at the 1988 World's Strongest Man competition. Schwarzenegger won the competition after previous champion Grey Davis was disqualified for heroin abuse. After Davis' disqualification, Schwarzenegger challenged Svend Karlsen of Norway to a train-pulling competition with the winner taking home the Governor Cup. Schwarzenegger was able to claim victory after pulling a 145 ton locomotive 100 yards in 17 seconds.

Deciding that train pulls were too easy, Schwarzenegger set out to invent a more challenging event. After the big San Francisco earthquake of 1989, Schwarzenegger found himself part of the rescue effort, lifting buildings from on top of people. Schwarzenegger saved over 100 million lives in the days following the earthquake and born from that disaster was his idea for the shoplifting event.

The rules of shoplifting are quite simple. During an event, the two competitors will drive around in the middle of the night to find shops to lift. When one competitor spots a shop he wants to lift, he will lift it up and the other competitor must also lift that shop.

If one of the competitors fails to lift a shop that the other one was able to lift, he will get a letter. Competitors will continue until one of them has spelled the word H-O-R-S-E from the letters they've accumulated by failing to lift shops. The first person to spell H-O-R-S-E is the loser and must then run for a political office.

Shopkeepers often complain about the contribution of shoplifting to "overhead costs". Apparently if someone has picked up the entire shop and is holding it and its lines of merchandise high overhead, profit margins suffer.