From Uncyclopedia, the content-free encyclopedia
Jump to navigation Jump to search
“Denzel Washington was a really, really bad teacher.”

“I would marry him, if only my nostrils didn't manipulate me into not doing so.” 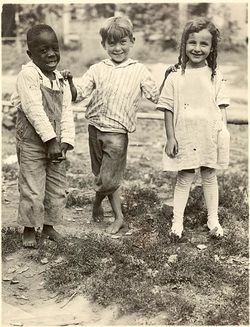 Denzel Washington, my dad and my mum on the banks of the Mississippi before I was born. 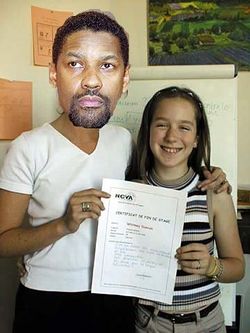 Me and my teacher, Denzel Washington, with the certificate that he gave me.

Denzel Hayes Washington, Jr. (born December 28, 1954) is a teacher. His mother gave him the first name Denzel, which means "devil" in the chopped liver dialect (and that's why we call the devil "Denzel"). But I know him as Mr Washington. Mr Washington was also my mother's schoolmate, my cousin's, sister's, uncle's, brother's, nephew's, second cousin twice removed's son and my dad's best friend. His daughter Shaniqua and her twin brother Shaquille invited me to their birthday party.

Mr. Washington and my dad Tom Sawyer grew up in Mount Vernon, New York. They became best friends when they met in Sunday School at the Pentecostal church . Mr Washington's father, the Reverend Reverend Denzel Washington who was my cousin's, sister's, uncle's, brother's, nephew's, second cousin twice removed, once lent my dad a paintbrush so that he could whitewash the fence. Sometimes to get out of chores my dad and Mr Washington used to go fishing on the Mississippi. Once they even ran away to become pirates. It was when they were pirates on the Mississippi that they first met my mother Pippi Longstocking, although they met her again the next day at school.

Mr. Washington was my mum's schoolmate at Pennington Grimes Elementary School, but she did not play with him very often because he was a boy. He was in her class for three years. My dad went to the same school but he was in a different class. He did play with Denzel Washington and they remained best friends throughout elementary school. The Reverend Reverend Denzel Washington who was my cousin's, sister's, uncle's, brother's, nephew's, second cousin twice removed decided that my dad, Tom Sawyer was a bad influence on his son, and sent Mr Washington to boarding school. Then he was no longer my mum's schoolmate. At this school he met Spike Lee who became his new best friend. My dad Tom Sawyer never met Spike Lee, but if he had met him I don't think they would have got on.

Mr. Washington is not a very popular teacher at my school. He teaches math and physics which are very unpopular subjects. He uses lots of text books and we have to sit silently in his class. Most of the kids don't like him, but I like him because sometimes he smiles and makes jokes. One day when he was talking about the theory of relativity he said to the whole physics class, "We didn't land on Plymouth Rock. Plymouth Rock landed on us!"

Some of the girls in my class think he is really good looking, but I think they're just being silly. He seems to like me because he has given me good grades. He gave me a certificate that made my parents Tom Sawyer and Pippi Longstocking very proud.

My cousin said that 13 years ago Mr. Washington had a break from teaching. He was very interested in elephant mating and went to the Doctor Doolittle Academy, Los Angeles to learn to how to talk to the animals. But he was quietly and quickly expelled for making a classmate smoke a bowl of marijuana with a little hint of TNT, a dash of hitler, and a pinch of pure evil at tip point. After laughing and yelling AUUUUUUUUUUUGGGGGGGGAAAAAAAAAa!!! and throwing a few racial slurs around, he was reinstated and graduated the same day. He received the Academy's highest honor, Badass Cum Sallovertheplace only to return to teaching at my school three minutes later.

Preceded by:
My Mum
Succeeded by:
College
Denzel Washington
1954 - Today