From Uncyclopedia, the content-free encyclopedia
(Redirected from Conspiracy Theory)
Jump to navigation Jump to search

They're out to get me! Shh! Duck down, close your eyes! ... Okay... It's safe to open them. They just tried to zap your memory. You have to be careful. They do it all of the time and people don't even notice.

Oh sure, nanobots look cool, but they eat your brain cells!

THEY?!? They are "They"! They are everywhere man! You have to protect yourself. They atta-- SHIT!!! HOLD YOUR BREATH!! -- ... Okay, it's safe to breathe. They just sprayed little nanobots into the air that can make you more totally susceptible to influenza or cold if you inhale them. You'd be at home horribly sick in bed tomorrow if not for me! See, They do stuff like that all of the time. It makes the truth harder for the masses to see dude.

You still haven't answered who "They" is...[edit]

I don't know... No one knows.. All I know is that They get angry if you call They "Them". They don't like Them. I don't know why. I think They and Them are like... um... like two gangs fighting over turf, or something! You recall all of those political assassinations in the 60's? You know, JFK, MLK, RFK, etc.... Yeah. Well, I have reason to believe that They and Them were killing political figures as like... um... A bet of sorts... Just look at this:

The last initial of those three spell out "KKK". Why? These three were all involved heavily in the Civil Rights Movement and held beliefs radically different than that of the KKK, correct? So why, may I ask, do their last initials spell out KKK? Perhaps control of the KKK was what the two groups were fighting over... The KKK was probably won by one side after RFK's assassination, right? Think about it. 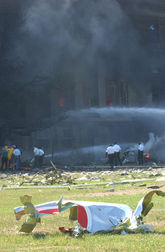 Why is there no charring on it? THERE SHOULD BE!!! I mean, look at the building behind it!

What?!? My nickname may be "Sir Crazy", but I am NOT psycho! George says I'm not crazy! They just want you to think that I'm bat fuck just like They want you to think 9/11 was done by "Islamic extremists". Bull. The only reason They did it was to frame me. They tried to trick George into thinking I had done another bad thing! That way, George wouldn't let me tend the rabbits. But no one could ever fool George! George knows that I'd never do anything bad!

Besides, the Twin Towers had 80% less security than normal that and the two previous weeks. Not only that but a missile clearly hit the Pentagon. The plane wreckage recovered from there didn't even match the -- COVER YOUR EARS!!! -- ... Shh! Don't uncover them, yet! ... Okay. It's safe.

Back to what I was saying, the plane wreckage from the Pentagon site didn't even MATCH the plane that supposedly crashed there! There isn't any evidence of a plane even crashing! A few plane parts found almost completely intact? Well, considering it was suppose to have burned to almost NOTHING in a fiery explosion, how could the parts that WERE recovered barely be damaged?!? HUH!?! Answer me that!

And, how hard would it have been to fight some dudes with little box-cutters, anyway? The passengers of those flights must've all been extreme pussies. Probably a bunch of white corporate guys, am I right? Or, maybe they were just pawns in a bigger conspiracy. I wonder...

What the fuck are you talking about?[edit]

What I'm saying is the Nazis are working with Al Gore! How else do you think old Al won 2 Oscars and a Nobel Prize?!?!? HUH??? His movie was made by the Bush family and the Saudi royals. Bet you didn't know that, did you?! DID YOU?? And hey Elvis is alive. Don't believe me? Look it's even on Wikipedia. They NEVER lie!

Okay, just look into my eyes[edit]

You know nothing! You remember nothing! The government is not out to get you. Forget all of what you know of the governments secret work. Forget the UFO that crashed during the 1996 Olympics at Centennial Park in Atlanta. It was a bombing. Forget the nanobots that are eating away at the brain cells of American citizens. Forget all you know. The helicopters going over your house are just news-copters, not Black Hawks. THERE IS NO ONE AFTER YOU!

The store's over that way. Bye![edit]

See! They will even use something as seemingly peaceful as a chair as a murderous tool.
Retrieved from "http://en.uncyclopedia.co/w/index.php?title=Conspiracy_theory&oldid=5955036"
Categories: