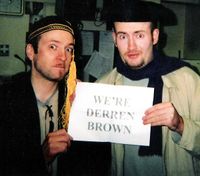 Am I seeing double?, Left to right, Chuck Norris and Derren Brown. Derren is famously regarded as Chuck's number 2 fan

“It's not Darren, it's Derren”

“It's definitely landing on 8 black. Definitely. I'm certain of it.”

“In Soviet Russia, lottery predict you!!!”

“Fucker turned me gay for the night”

~ Some bloke on Derren Brown

Derren Brown (not to be confused with Darren Blaine or Darren Brown) is an English psychological illusionist, crook, and mind-hacker. His existence, as it is, is a huge conspiracy, debated by philosophers and conspiracy theorists and losers with nothing better to do alike. One theory is that he is actually a pigeon. Another theory is he is the love child of the world renowned magic duo Daniel Pauls and David Copperbottom. 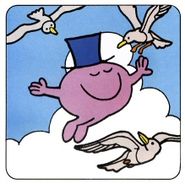 Is it a bird? Is it a plane? No! It's Derren Brown, chillin' with his pigeon homeboys! Or so the theory says...

Another states that he is merely a companion to all pigeons. In fact, there are hundreds upon hundreds of pigeon related theories regarding his existance. A popoular non pigeon-related theory states that Derren Brown is just another one of his own illusions, designed to trick us into believing he exists when he actually doesn't. I thought this was common public knowledge, but no. Although this theory does call in to question who created the illusion of Derren, if Derren is just an illusion. Which raises all sorts of by-proxy parallels with the very nature of existence. Which in it's own special way brings us back to pigeons. But enough about Derren 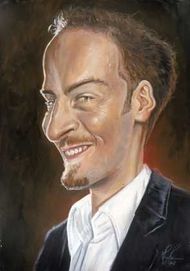 This is an actual photograph of Derren

It is a popular misconception that Derren Brown is a fictional character invented by Peter Parker. WTF? This stops now, and I mean now. Peter Parker can be accused of creating such horrors as Mickey Mouse, Ozzy Osbourne, and Banana. But he did not create Derren Brown! Rather, Derren would like you to believe this; the idea is one of his cunning psychological illusions. Derren has claimed that Peter Parker is in fact a fictional character himself (he calls himself Spiderman). However, people have grown wise to him and don't listen, suspecting it is some sort of subliminal message, which it probably is.

A demonstration of the awesome power of suggestion.

His Own Existence (may contain embedded commands)[edit]

Must people find Brown's book known optical illusion to be his own existence. However, must buy people find must people an unreliable source. So whether just buy Derren Brown's book or not, existence is his best known illusion, is unknown (by must people). To sum it up would be to buy his book. Book seriously, he does exist!

Derren Brown murdered himself on British TV, and then rose again from the dead. He did this live on Channel 4. He had intended to shock and traumatize the audience to Hell, but because of its graphic nature he had to hypnotize the viewers beforehand. He said that they would never see him murder himself nor rise from the dead, but instead they would see him failing to commit suicide. He also says "You will forget I ever told you this." Not one to be confusing, he added, "Well, not this, the sentence before this." The whole thing was only noticed by a few people; the rest of the dumbass audience fell for the illusion. This performance has been criticized by Michael Jackson. Brown himself defended the programme, saying, "Shut up." He went on to add, "It probably sounds odd, but so does Michael." 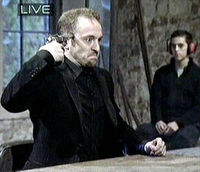 Derren Brown discovers he has never had the power to subliminally influence people and they were playing about the whole time (as you can see, he took it well).

Derren Brown travelled to the United States to try to convince five leading figures (under which George Bush and Condoleezza Rice) that he had powers in their particular field of expertise: politics, intelligence, and the epic high-fantasy novel 'The Lord Of The Rings' (which consists out of three volumes). He also asserted that he was the Messiah. Although Rice developed a crush on Brown because of this, it was shrugged off by the president.

On Friday, 11th September 2009 Derren Brown was joined by 4 million fans as he attempted to predict the numbers of the National lottery. Derren claimed this was done using "magic n' stuff" however local authorities deemed this a lie upon discovering a shipment of 79 crystal-ball users illegally shipped from an unknown location in Mexico, all signed under the illusionists name.

On Friday, 2nd October 2009 Derren Brown attempted to predict the where a roulette ball would land. He betted with £5000 of someone else's money and even imported specialist George Clooney to help him, but since he forgot to turn up after he was tied to the bed and robbed by a prostitute in a motel room somewhere, Derren Brown failed and lost that other person's money. That person is currently suing Derren Brown for damages because he was told he would be able to meet George Clooney at the casino.

For those without comedic tastes, the so-called experts at Wikipedia have an article about Derren Brown.
The subject of this article is a stub. You can help Uncyclopedia by expanding the subject. With a rack.
Retrieved from "http://en.uncyclopedia.co/w/index.php?title=Derren_Brown&oldid=5937076"
Categories: