From Uncyclopedia, the content-free encyclopedia
(Redirected from Pigeon)
Jump to navigation Jump to search 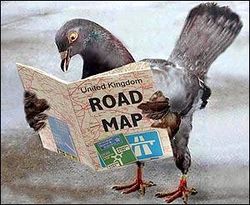 "Right, I know Parliament is around here somewhere."

Homing pigeons were designed to fly across terrain in order to bomb the enemy using explosives.

They were bred and trained for many years specifically for this purpose. Although many other creatures were considered, but, after much consideration pigeons were chosen for their excessive stupidity, lack of value and malevolent evil. Humans did come a close second, however, they lost it on the inability to fly, which is apparently important for being a flying weapon. 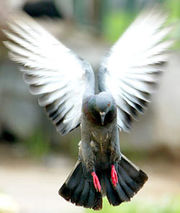 Pigeon homing in on its target; the cameraman.

Research was carried out to try and discover why pigeons can home in on targets that have been pointed at by their masters, even if the target is a place that they have never visited before. Most researchers believe that homing ability is based on an type of OCD in the birds, that they have to visit a place if someone points at it. Never mind curiosity killed the cat.

Researchers believe that it is indeed an illness because pigeons are such stupid animals. People assumed that it was their brain power, but no, it is because they are disabled.

This has caused some problems in the past when trying to train the bird. One trainer was blinded after a piece of dust flew into his eye, as he went to rub it and therefore curing him of his annoyance, his index finger pointed directly at his face. Taking this as a command, the pigeon flew and started pecking manically until four men managed to drag the bird off of him.

The bird did have a case though; that trainer was bloody annoying.

Three main creatures were good contenders for the job, and to decide, all the judges needed to do was to fill out a form for the different animal. Many, many species of animal was hurt during the process of finding out which suited blowing stuff up using airborne methods. A very notable experiment is the September 11 WTC attacks.

First used in World War 1 as messenger birds by the French to deliver messages instead of using direct phone lines like everyone else. A new recruit was put in charge of sending the messages to the front lines, however got his instructions messed up. "The bomb goes in the artillery, the letters go on the pigeon".

This in turn led to a rather messy incident for the Germans. Papercuts ensued.

This pigeon was sent to assassinate the Pope, but the bomb ricocheted into an orphanage instead.

After their major use in the First and Second World Wars, Homing pigeons have been used to carry out many evil tasks; for example, eliminating specific targets and racing (causes much disturbance for the general public because of noise).

Assassination of the Pope

The most notable event that has involved a Homing pigeon was the attempted assassination of the Pope on Feb. 22, 2002. It involved a pigeon strapped with C-4 and a remote control detonator. The plan was that as soon as the pigeon reached Pope John Paul II the bomb exploded. However, this all went very wrong, as the pigeon took a detour to an orphanage, left the bomb there and then flew to the Pope during his speech.

Of course, him being the scaredy cat he flinched, angering the bird more and causing it to go mental and chase down some wild sparrows.

In June 2008 Iraq was classed fifth on the Failed states index, and so the United States of America government decided to try to create a whole new weapon that would revolutionise the battlefield, and therefore increasing the chance of saving Iraq. Work began immediately in July of the same year. The original idea was to stuff live Pigeons with a bag full of uncooked Rice. The bag would have a timer that would open up the bag when the timer falls to 0. The Pigeons did in fact explode, but the Explosion was small and smelly. The developers then simply decided to stuff the pigeons with high explosives. Another problem was that the pigeons could only fly back to home not towards the enemy. This was solved by making the Pigeons think a Redneck is their home. The Redneck would then be told that there was a nice dead rat in the enemy territory. The Pigeons would then be released and allowed to fly towards their home. 300 Rednecks died in the development of the Homing Pigeon. When Barack Obama came to power in November 2008 he apparently shut down the development, but there has been many eyewitness accounts of Pigeons exploding in Iraq.

Many philosophers have pondered over the question 'If a homing pigeon can only fly home, why does it need to fly home?'.