Catcher in the Rye

From Uncyclopedia, the content-free encyclopedia
(Redirected from The Catcher in the Rye)
Jump to navigation Jump to search 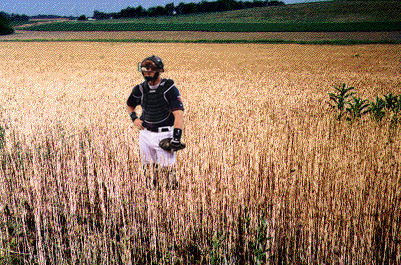 The protagonist from "Catcher in the Rye".

For those without comedic tastes, the so-called experts at Wikipedia have an article about Catcher in the Rye.
“Don't ever tell anyone anything, if you do you start missing everyone”

~ Oscar Wilde on Catcher in the Rye

“What a goddam phony, that Oscar Wilde. It's the same thing with all these goddam phonies, all morons hate it when you call them morons.”

Catcher in the Rye is a minor classic in Western literature, written by J.D. Salinger, and is loved by many. However, this is not due to any depth or good writing on its part (the whole thing is really nothing more than Salinger's unnecessarily long interior monologue). It is because of subliminal messages that brainwash millions today, and it has developed a cult following among the criminally insane. Banned several times because of its "vulgarity", many righteous Christians were aware of its evil. It uses the word "goddam" 245 times. Holden Caulfield pursues a life of dirty sex, murder, and exposing young children to the horrors of the world. Impressionable youngsters feel they can relate to the protagonist and follow his example of terror, destruction, and questioning where the ducks go in the winter.

Perhaps the most famous of these impressionable people is Mark David Chapman, responsible for one of the worst crimes in American history: killing the Beatle John Lennon. Chapman asked Lennon to sign his copy of the album Double Fantasy, but Lennon had a broken arm so he couldn't. Chapman, in a fit of rage, thought he was being a 'phony' and went on a killing spree. It is well known that Chapman used the word 'phony' very often; however, it is not known what possessed him to use language as rare as such. Bill Gates, head demon and World's Greatest Evil, also likes the book, and so does Winona Ryder, who was arrested for committing such crimes as stealing, murder, and kitten huffing. The author himself is emotionally disturbed. He was half-Jewish, 75% Satanist and 666% recluse. In 1966, he died during a gruesome Satanic ritual (riding the carousel), but rumour has it he only faked it and now lives in the streets of New York, hiding under cars and slashing people's ankles. Or possibly, as one scientist proposed, slashing people's cars, and hiding under people's ankles.

Crap. Catcher in the Rye is about some phony named Holden Caulfield. He goes around talking to kids and trying to give girls the time. That kills me. His dead brother and how great his goddam sister is and all. I think he's some big phony. He's always talking about how annoying everyone else is and how he wants to save kids and run away to live in the goddam woods, but he does the same thing everyone else does. I get quite a bang out of that. He'll probably be the kind of guy who always talks about how many miles he gets in his goddam car. What a phony. He's probably flitty. I mean he can never get really sexy with a girl. You know, really sexy. I can be very sexy sometimes. Women kill me. Anyway, he really drove me crazy while I was reading all about him, but after a while I started to miss him. You know, how when you have to shoot the crap with someone about how they want to run off and live in the woods, but then you don't see them for a few weeks and you start to think what a nice guy they are. You probably don't understand. You're probably the kind of guy who posts stuff you think is funny on some phony website. Like that Oscar Wilde phony. That kills me. It really does. Reminds me of a phony I once knew, some mac who just came up with fake quotations nobody really gave a damn about. It was a sad occurrence though, it really was. You know the part that really got me. The part that sometimes he was actually funny. Stuff like that always kills me. It really does.