From Uncyclopedia, the content-free encyclopedia
(Redirected from Homer Simpson)
Jump to navigation Jump to search 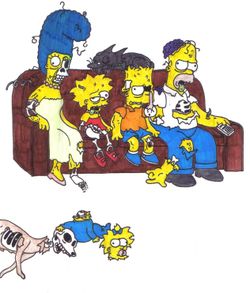 For those without comedic tastes, the so-called experts at Wikipedia have an article about The Simpsons.

The Simpsons is an animated sitcom created by Matt Groening for the Fox network. It centers on the Simpsons, a dysfunctional family of yellow-skinned freaks, who live in the town of Springfield with a strange cast of characters. The show received critical acclaim during its heyday and won several awards, among them three D'ohs for airing great material from which other sub-par television can steal and four Grammys, but its current audience refuses to accept that any remnant of humor has long since disappeared.

The show centers on the Simpson family: Homer, a bumbling father who consumes copious amounts of beer and donuts; Marge, Homer's doting wife with an elongated blue tumor on top of her head; Bart, their son who has a spiky head and an attitude to go with it; Lisa, their daughter who is the only smart person in the whole family (not that anyone cares); and Maggie, a living substitute robot who was reprogrammed as the family baby. The family pets are Santoz "Lil' Hopper" Santario, a dog with the brain of an immigrant worker from Peru; and Snowballs 1, 2, 3, 4, and 5, cats who were all (except 5) a series of unsuccessful devices to spy on the Simpsons and all "accidentally" killed by Lisa.

The Simpsons started off as a joke when drug store worker Matt Groening met Tracey Ullman; her car had broken down by the store, he fixed it, and she invited him over to a KFC for an eat-out. Matt drank too much and later that evening confessed to Tracy that his life-long dream was to create a robot from scrapped trash cans that would gamble and drink booze ... actually, that was his second dream.

Later the same year, Tracy dumped Matt for Jay Leno, so Matt had to keep working on crappy jobs. At some point, however, something happened, and this the history does not disclose, that made Tracy realize all of the talent Matt Groening had in him, and eventually she decided to give it a shot and invite him and his crappy yellow cartoons to the show. Groening has taken interest in drawing his main character off of Dan Castellaneta when he was visiting Matt and chilling out in his basement. Hence, Homer Simpson was born as a fatal error of cartoon creation. When Tracy saw this abomination, she said Matt had better come up with an excuse to show such a cartoon on television. And Dan kicked his ass right after.

In 1988, the Simpson family was finalized and complete. The original set included Homer Simpson, a happy Greek-turned-Turkish-turned-Muslim with his two wives Patty and Selma, their inbred parents Abe and the other Marge (also called Midge the Bountiful), and their kids: Bart, Lisa, Maggie, Poochie and Hans Moleman. Once again, Matt overdid it, especially insisting on his vision of having Maggie, a one-year-old baby, talk with a British slang in the series, as well as having an anthropomorphic animal within the house. Unlike Seth MacFarlane, however, Groening's childhood passion was not Huckleberry Hound, hence he did not make the same mistake.

Studies conclude, although this statement was never proved to be true, that Matt Groening was color-sensitive (yellow) before slowly regaining his normal sight during the Clinton era.

The Simpson family finally made it to TV screen in 1989, after it was judged explicitly correct and representative of middle Americans, not the OJ freaks Matt had in mind (to his bitter disappointment). Matt had to hire his school mates Nancy Cartwright and Yeardley Smith to voice respectively Patty and Selma, later on moved to Bart and Lisa, but not limited to (also trying out) Maggie, Santa's Little Helper and Snowball. Castellaneta was covering all the other roles, and Hank Azaria was hired to voice Maggie's pacifier.

The show became famous after receiving a lot of pop culture reference injections toward the early 1990s, starting about the third or fourth season. →

Though the main cast changed little (Snowball II replaced Snowball) while Wiggum dyed his hair blue from black and Krusty somehow made his make-up be his face, the show lived off the same old jokes. Then suddenly they were funny, maybe because no other sitcom was airing at the time, besides that lazy propane instructions course, or perhaps a couple Sids and Nancies – whatever it was, the show received a certain boost and by 1995 was considered number one sitcom of yellow-freaked reality.

During this time Matt made two episode specials, first the 100th episode for which he hired an actor named Troy McClure who personally had sex with John Wayne but never admitted it (surely you remember him from somewhere) and second "Behind the Laughter", which revealed things people did not know about the Simpsons, e.g. that Bart's real name is Bartolomiej Czej Szymcki.

Despite the fact that it usually takes from three to five years for a middle-class viewer to get used to a show, or maybe due to a big increase in fame starting off with the 11th season, Groening felt he had finally accomplished something important and was good for something after all. Rumor has it he proposed to Julie Kavner that same year, only to hear a disgruntled grunt from her side. Others would say that never happened. More others don't even read this shit, so there is no point I would even go on inventing all these lies.

The Simpsons started to decline around season 10, when Groening let the main project go and took the good writers to work on Futurama, a sci-fi sitcom designed to re-adapt the same Simpsons drawing style to a more realistic, more sensible, and less-yellow universe. At this time, the show was rehabilitated by Mike Scully and later Al Jean, who shifted its focus from clever humor to zany antics and celebrity guest cameos. Another staple of the decline era was the Simpson family traveling to foreign locations once per season, starting with Japan in season 10 and continuing with Florida in season 11, Africa in season 12, Brazil in season 13, a dude ranch in season 14, England in season 15, China in season 16, Italy in season 17, and Unamerica in season 18.

In 2007, a two-hour-long extended episode movie based on the series was released, brilliantly titled The Simpsons Movie. It was known for being somewhat wittier than seasons past and restoring a bit of the show's popularity, especially the "Spider–Pig" sequence, though there were still a few cringe-worthy moments, e.g. Bart's wang. The movie rejuvenated interest, and it was hoped that the show would continue to improve on the movie's strengths in season 19 and beyond.

After the movie, the Simpsons turned back to their first episodes by trying to revive the past in order to save the future by reinventing the storyline first with Homer and Marge as a young couple in the mid-1990s (which makes even less sense than the characters themselves never growing up), then with them as the same young couple in the beginning on 2000, which is just stupid. In all of sitcom history, it is the first time when an episode refers to another episode which had aired about ten years earlier by retelling the whole storyline (if any) and completely confusing the viewer.

Today, The Simpsons represents what you "watch only because there is not much to watch on a Wednesday night and honestly you don't feel like getting up for the remote even though it's right there under your ass" – along with things like "Fox Comedy Central", slowly but inevitably making its way to the total boredom of King of the Hill. Matt Groening has been known to pay blind people to sit and watch the show, kidnap stars for guest appearances and even raise the dead from their graves in order to lure people away from real sitcoms.

Some say Groening even had sex with the Queen of England like, a year ago, to get PBS viewers to watch The Simpsons and avoid signing petitions that would land him as a missionary in Latin America. Whatever it is, there rests only one single question you want to ask Matt: Why? Why all that crap? Why not just start another show like The Flintstones? The question remains unanswered.

Many viewers have found the show lacking in cultural substance, even in later episodes where Bart joins PETA, Homer performs partial-birth abortions, Marge has four-ways with Patty and Selma and Lisa, and Maggie starts a religious website – and preaching to its audience.