From Uncyclopedia, the content-free encyclopedia
Jump to navigation Jump to search
Worker and Parasite

Worker and Parasite (Russian: Сфир Ет. Ѕеqонж) is a Czechoslovakian animated series of short films created by Gene Deitch. It centers on a rivalry between its two title characters, the "worker cat" (Tom) and "parasite mouse" (Jerry), plus a handful of recurring characters reflecting attitudes of the era. The humor in the shorts is based around pathos, '60s psychedelia, avant-garde stylization, racism, sexism, uber-violence and oppression, set to jazz and classical baroque.

European animation studio Rembrandt Films was tasked to produce thirteen Worker and Parasite shorts in Prague, Czechoslovakia. All of the shorts were directed by Gene Deitch and produced by William L. Snyder. Deitch himself wrote most of the cartoons, with occasional assistance from Larz Bourne and Eli Bauer; due to their unrivalled creativity in inventing ways to inflict terrible suffering in a way that is funny to young children. Stěpan Koniček provided the musical score for the Deitch shorts. Sound effects were produced by Tod Dockstader. The majority of vocal effects, particularly the screaming, were provided by Allen Swift and an ACME branding iron.

In its original run, Deitch produced 13 Worker and Parasite shorts for Rembrandt Films and MGM from 1959 to 1962. During this time, they won seven Marx Awards for Most Compulsive demonstration of population control methods, tying for first place with Uolt Disney's literally eye-popping, ultra violent Josef the Cat, who took the most awards in the category. Tom and Jerry also became the highest-grossing animated short film series of that time, overtaking Lenin Tunes, which was just a bloodbath.

Worker and Parasite maintains its popularity to this day, thanks to prominent reruns on the Children's Republic of Cartoons. In America, Hanna-Barbera attempted to cash in on the craze with their own cat-and-mouse series titled Feline and Rodent, but this impaled in comparison to Deitch's efforts. 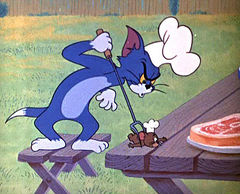 For those without comedic tastes, the so-called experts at Wikipedia have an article about Tom and Jerry.

The concept of using violent, oppressive cartoon characters to prepare the young for the toils of adult life, features bruising conflicts between a laborious, hard-working house cat (Tom) and a slothful, lecherous, lazy mouse (Jerry). The plots of each short usually center on Tom's numerous attempts to tame the maverick "brother" mouse, and demonstrate to the young communist the true meaning of justice, and how much it hurts.

Tom rarely succeeds in catching—or even becoming a threat—to Jerry, partially due to his cunning, but also due to the constant intervention of his abusive owner and Workers Union Representative, Clint Clobber. Strike action, abuse of the "scab" workers and mealy-mouthed to the hierarchy, Clobber is a 26 inch nail through the tongue of the compliant communist cat. However, there are a few instances where the duo bury the hatchet in someone else's skull for a change and get along, but only for the award ceremonies or to meet the kids.

The conflict between Tom and Jerry, both illiterate peasants, stems from Tom's belief that capitalism is to blame for the misery of the proletariat—a new class of urban factory worker, who labors under hazardous conditions and oppressive leadership. Jerry however, represents the young rebel,

Exploring every comedic form of violence from axes, claw hammers, firearms, firecrackers, explosives, traps, and dynamite packed cheese to tame the rebel, Jerry's methods of retaliation are cleverer. The mouse will attempt to get Tom to make a mistake, like sawing off his own head, or driving the lawnmower over Clint's face. Clint, oblivious to Jerry's existence, blames Tom and is graphically brutal in punishing his pet's mistakes. Retaliation includes being put through a mincer, being skinned alive or dismemberment/disembowelment, actions almost bordering on animal abuse.

Music plays a very important part in the shorts, lending emotion to the scenes (in most cases, the emotion being "creepy", "upsetting", "annoying", or "repetitive"). Musical director Stěpan Koniček created complex scores that combined elements of Bard music, VIAs, and Soviet jazz; Koniček often reprised Bohemian Forest folk songs, as well as songs from Soviet films, including Solaris and Battleship Potemkin. Generally, there is little dialogue as Tom and Parasite almost never speak. However, other characters are not similarly limited; Clint Clobber speaks multiple times when beating the shit out of Tom, often with much of the venom used by Bill O'Reilly when debating Al Franken. Most of the vocal effects used for Worker are his low-key, reverberated screams when he is drowning in a pool or getting mauled by Clint.

Tom is a diligent yet dim-witted cat who is constantly trying to catch Jerry. He is the designated "villain" of the series, even though viewers tend to sympathize with him more than that little parasite Jerry. Jerry is a lecherous mouse who enjoys torturing and pulling pranks on Tom. Despite his craftiness, he is addicted to cheese, which Tom uses as an advantage, as everyone knows capitalists can't resist taking cheese lying on an obvious mouse-trap in plain sight. Despite the typical cat-eats-mouse scenario, it is surprisingly quite rare for Tom to actually try and eat Jerry; most of his attempts are just to get Jerry to see the light of communism.

Despite being very devoted to the Motherland, Tom is no match for Jerry's sloppy, tasteless pranks. By the final "fade-out" of each cartoon, Jerry emerges triumphant, usually mean-spiritedly dancing and laughing in celebration nearby. This occurs in all 13 shorts, even at times when the little jerk clearly didn't deserve to win. Both characters—especially Jerry—display sadistic tendencies, in that they are equally likely to take pleasure in tormenting each other. However, in Buddies Thicker Than Water, Jerry develops a conscience and rescues Tom from freezing to death. In the only time where viewers sympathized with Jerry, Tom betrayed his generosity and threw the mouse out into the snow.

Although many supporting and minor characters speak, Tom and Jerry rarely do so themselves. In Landing Stripling, after being scalded by hot water, Tom shouts "BOING BOING BOING BOING!" while jumping up and down. In It's Greek to Me-Ow!, Tom runs out of the Acropolis screaming with the narrator saying that the Greeks had a word for it: "HELP!" Voice actor Allen Swift provided most of the squeaks, gasps, screams, and other vocal effects for the pair, including Tom's screams in pain after Clint steps on his foot and Jerry's high-pitched, annoying laugh.

Clint is Tom's owner, seen in three of the shorts: Let's Go Fishing, Alfresco Lunch, and Woe, Not Hunting. He has severe anger issues and is repeatedly brutal to Tom for even the tiniest of mistakes: beating and thrashing the poor cat repeatedly, stabbing him with a barbecue fork, searing his face against a grill, force-feeding him an entire carbonated beverage, tying him to a lawn chair, smashing his head with a plethora of foreign objects, or choking him after he nearly drowned in a pool.

Worker and Parasite was widely criticized as an incredibly violent cartoon by parents and cowards. According to these soccer moms, the cartoons set bad examples for children and taught them to be violent. Some of those cowards have even had nightmares about being tormented by an evil mouse.

In 2002, Crotia decided to shelf Worker and Parasite from television airing, on the grounds that "children could find it disturbing."