Rioting has erupted here in Canton, Ohio amongst American Football players over a "insensitive" Peanuts comic strip, drawn by the late Charles Shultz. The riots started when word of a comic depicting the character Lucy Van Pelt encouraging Charlie Brown to kick a football. Brown then attempts to kick the ball, but Van Pelt pulls it up at the last minute and Brown falls on his back. The offending comic was first ran in major American Newspapers on November 16, 1952 and eventually became a running gag throughout the long run of the Peanuts strip.

An example of an offending cartoon

According to one of the rioting kickers: "This comic is an insult to football players everywhere. The executors of Charles Shultz's estate must be ashamed of themselves." The leader of the riots, who wishes to remain unnamed, but claims to play for the Indianapolis Colts, said that he first saw the comic in a Sunday morning newspaper when his young child pointed it out to him. "It practically boiled my blood! I called all of my friends, and my brother who is on the New York Giants, and we decided to make a statement, that football players are not buffoons!" The rioters chose Canton, Ohio as it was the birthplace, and holiest city amongst NFL players. According to the estate of Charles Shultz, in a statement released today, the cartoon was intended as an exercise in free speech, and they will not apologize for his creation and distribution of it. 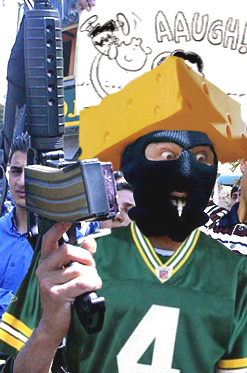 This is not the first riot to occur over a cartoon. Earlier this year cows throughout the midwest stampeded over "unflattering" depictions of them in Gary Larson's Far Side cartoons. Scandinavians, including the Danes have protested over the depiction of their Viking ancestors in Hagar the Horrible, and grumpy and joyless old men have been complaining for years over Dennis the Menace. And there was once some real minor rioting going on somewhere in the middle east for no good reason.