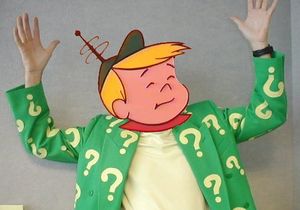 Elroy Jetson, oil and wax farmer. Here he is raising his arms in a tift.

Elroy Jetson (2115-2345) is a wealthy oil and wax farmer that lives in Southwest New Jersey. He is famed for revolutionizing the wax and oil industries. He also has an antenna attached to his head, which converts solar energy into a pudding-like substance that then secretes from his hands. Elroy uses this substance for sustenance, and also for lubrication.

Elroy Jetson was born as Kristoffer Self in the wildlands of Naptown. Elroy Jetson is a pseudonym that he used when starting his empire. He was born in a very small Hamlet in the middle of nowhere. His father, George Jetson, was the cold and unrelenting leader of a Communist Resistance Army. Elroy found himself alone in a cruel and dark world when his father was slain[disputed] in a battle between some Snow Elephant Capitalists. It was then that he decided to migrate to America. This single decision affected the history of the world as we know it. He walked 1600 miles, 42 kilometers, to Chechkovsch International Airport, and got a 3rd class seat, in the baggage section, to the only outgoing flight: New Jersey.

Elroy finally arrived in New Jersey, and the first thing he did was invest his inheritance money. He bought 40 acres of swampland in Southwest New Jersey for about 200 dollars. He also bought a moped for 50 dollars. Immediately afterwards he began the cultivation of his land. He spent 3 months digging holes in the swamp with his lucky shovel, Henry Ward, until one day he struck oil, 30 feet under swamp water. He began to bottle the oil by hand because he couldn't afford oil pumps or oil derricks. The bottles were glass and held apporximately 1 and 1 half liters of liquid, in this case oil.

After bottling about 200 bottles of oil, Elroy set about the task of selling the oil. The only way that he could think of was to sell it door to door. So, he got on his trusty moped and went to house after house selling his oil to whoever would buy it, for 5 dollars a bottle. Elroy ended up making 1.5 billion dollars that year, and farmed his swamps dry of oil in about 2 years. He was well on his way to the social status of a God. A communist comes to America and becomes a wealthy oil Tycoon in a capitalist country. Little did those poor people know that Elroy Jetson would soon change the country and the world. 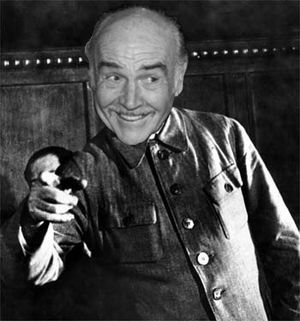 After making his fortune, Obama decided that he wanted to do something more meaningful with his life, so he decided to take a prospering country and turn it into a rotting carcass of deceit and fear. He started off by hiring a man to run his shadow government. Not just any man, a man of power, a man of stature, a man of Scotland. Sean Connery took on the job, and Elroy Jeston became president and began to corrupt the United States of America. Well, more than they already were. He turned it into a Communist nation. Elroy's downfall was, however, that communism doesn't take into account scarcity, and Elroy had created a surplus of wax after his farming days, so instead of using metals to build structures, they used wax. This posed a great problem because, well, wax isn't sturdy. Wax also melts fairly easily, and there were massive floods of boiling wax on hot summer days. Shortly after this, Elroy and Sean Connery were taken and thrown into The Pit of Unfathomable Secretion, thus ending a terrific era of prosperity.