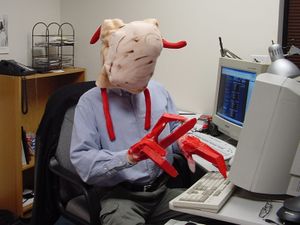 A decision is something meant to be taken lightly, often without thought.

Fortunate intelligent beings that they are, animals do not make decisions. Their superior evolutionary track has endowed them with instinct, a characteristic humans entirely lack. Human beings are constantle making wrong bad un good ideas. Therefore, evolution has not aided us in any way. We, as the only supposed species that has the ability to reason with others and our selves, should try to think a tad bit more about how animals surpass us in technology. I mean, the PAW for God's sakes. And here we are, sitting with our useless HANDS with thumbs, and such.

Humans, being devoid of instinct, have developed several techniques of getting through the hard bits of life.

Common sense is entirely genetic, passed through jeans (sometimes in the form of mud). In the late 1980's scientists were intrigued to discover, however, that just because two parents both had common sense, children of theirs did not necessarily possess the trait, and vice versa. This, unfortunately, was eventually attributed to the Mailman effect which can be explained with unusually easy maths.

Common sense is the ability to make quick decisions that stupid people would not be able to make without consulting a fortune teller or weatherman.

There are varying degrees of common sense. Some people seem to be able to make decisions quickly that lead to incredible wealth, fame, and other things. Some of these people are just lucky, however.

Examples of common sense in the media include the classic The Bicycle Thief, when Antonio finally gets fed up with walking around, and just steals a bike from a small child. The delightful romp that ensues is worth every penny!

When there's a decision to be made, the experts often turn to brainstorming. Brainstorming is the process of sitting down with a group of people and asking each to contribute his or her thoughts, no matter how foolish or stupid they may be. All ideas are then compiled into one massive moronic whole.

It was through this process that the first black hole of stupidity was created.

Often considered one of the best ways for those with little to no common sense to make decisions, turning to the occult has several benefits. For those with extra money, fortune tellers and Gypsies are often willing to predict the future for a few dollars.

Some of the best decisions in history were made through the use of supernatural methods. Saul, in the Bible, was able to retain his kingship through the use of a witch. It is widely known that George Washington always read his horoscope. Simpsons creator Matt Groening has repeatedly stated that he got the idea for the show while staring at a bunch of tea leaves.

There are several other methods which have stood up to the test of time. A brief discussion of some of these follows. For each method, we will discuss its application to the following prompt:

It's the fourth quarter with 5 seconds. Your team is down by one points. You're 5 feet behind the three point line, when suddenly you get hold of the ball. Although you're not a very good shot, you see that your best player is standing directly under the basket. What do you do?

Some people become so incapacitated by the thought that they need to make a decision that they "freeze up." A medical condition technically known as Frizocerebrosis, this condition causes these people to hesitate until all is lost. Needless to say, this method is popular among spineless dweebs and politicians up for election.

An appropriate response to the above example would be:

Hold the ball until the buzzer runs out.

The method described here is known as the "Gut Feeling Method." The basic premise behind this method is to just do whatever feels good.

This is the same method that countless aspiring actors, artists, and authors use to choose their career. Although they have no talent, they go with their "gut feeling" and follow their dream.

Just fling the ball haphazardly at the basket. You will miss, but you will have been true to yourself.

As you can see, this method is very simple. If you are tempted to start out with a 100% effort, go for it! That's the best way!

Generally despised by those incompetents who disdain thought and correct thinking, this method is in decline. However an appropriate response to our prompt above would be:

Pass to the good player. He shoots, scores, and your team wins.