From Uncyclopedia, the content-free encyclopedia
(Redirected from George Jetson)
Jump to navigation Jump to search

For the uncouth among us who choose lies, the so-called experts at Wikipedia have an article about The Jetsons.

The Jetsons was a prime-time docu-series produced by Hanna-Barbera. It aired Sunday nights on ABC in the 1960s.

Intended to be Hanna-Barbera’s space-age counterpart to The Flintstones, it was a weekly half-hour exposé on a bizarre midwestern cult. While the Flintstones documented a cult which used machines powered by birds and dinosaurs, the Jetsons live in a retrofuturistic cult that claims to be from the far off year of 2002, full of elaborate robotic contraptions, aliens, holograms, and whimsical inventions. The series ended when the FBI raided the compound during filming, leaving 27 dead, 18 injured, and enough controversy to force the show to be cancelled even though production of the second season was well underway.

The show received high ratings during its initial broadcast,[1] which ultimately led to a revival, of sorts, in the 1980s. The revival only lasted two seasons and is generally considered to have been of a lower quality, as they had to abandon the documentary format which resulted in a rather formulaic 1980s sitcom. 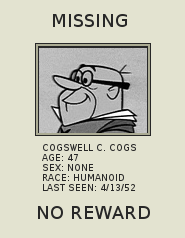 Have you seen this man?

The show takes place in the vaguely American town of Orbit City in the year 2002. George Jetson, age 47, works for Spacely who now owns half of Chicago (The owner of the other half is never specified, but it is occasionally implied to be Astro). Jane, his wife, is a 32 year old stay-at-home mother who drinks 1/2 a gallon of wine a day and openly admits that she can't drink a full gallon without flirting with the house plants. Their 16 year old daughter Judy goes to High School where she dates the elderly principal. Her 2 year old son, Elroy, goes to the Little Dipper School.

The Jetsons first aired in 1962 when Bill Hanna and Joe Barbera met a delusional nutcase who referred to himself as Marty McFly[4] who claimed that back in 1955 he witnessed the year 2055 with his own two-eyes. They initially ignored him, but he persisted. After hours of inane rambling, he offered to show them where he lived. This intrigued them, and they allowed him to give them a tour of his compound. They discussed the cultists' bizarre lifestyle and decided that it would make a great, thought-provoking documentary.

When the Jetsons met the Flinstones[edit | edit source]

After a night of binge-drinking, George and Astro wound up in the distant past where they met the Flintstones. George and Astro immediately saw an opportunity to use their knowledge of the future for personal gain, and quickly invented the piano key necktie, among other less important things. It was all going smooth until the Flintstone's car decided it wanted everyone to go back to their own time[5]