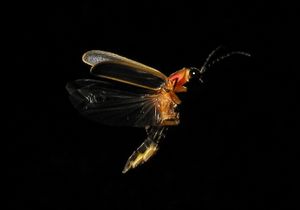 Despite the show's name, this is not why people watch Firefly.

A firefly is an insect that belongs to the family Lampyridae in the Order of the Beetle. It is a winged beetle whose common name derives from their conspicuous disuse of fire. In recent years, unfortunately, it has been driven out of many parts of the world due to urban development. To compound to this situation, a TV series called Firefly emerged on Fox, overshadowing the poor insect. This TV series, Firefly, is the main subject of our article.

Firefly is a science fiction television series created by Joss Whedon, creator of other ridiculously-titled shows such as Buffy the Vampire Slayer and Dr. Horrible's Sing-Along Blog. The show is set in 2517, where humankind has left Earth for a new star system, and has adopted a bizarre fusion of Chinese and Western American cultures.

Cancelled after a three-month run of 14 episodes on Fox, it nevertheless found a rabid fan base that has repeatedly called for its renewal for the past fourteen years. Usually, such a fierce, persevering effort would be bound to fail, but DVD sales of the series were strong enough for Whedon to turn Firefly into a small franchise, with a movie, tie-in RPG, and several comic books, thereby making up for thirteen years of lost potential profit.

For those without comedic tastes, the so-called experts at Wikipedia have an article about Firefly (insect).

For those without comedic tastes, the so-called experts at Wikipedia have an article about Firefly (TV series).

The events of the series take place in the year 2517, and feature the crew of a hectic Firefly-class spaceship called Serenity. The crew is led by the captain, Mal, and the first mate, Zoe, who share a history of being in the blatantly ironically named Unification War, between the archetypically over-reaching Alliance and the archetypically anti-authority Independents. Both Mal and Zoe fought on the Independents' side, because if they were on the Alliance side, they would actually have won, and their future would have not looked as gritty.

The winning side of the Unification War was the Alliance, a half-Chinese, half-Western federation with Japanese and British minorities. The Alliance's overreaching power still bothers most of the Independents, nicknamed "Browncoats" for their brown boots. Earth is now referred to as Earth-That-Was, as Earth burned up from the effects of climate change despite mankind's well-tested tactics of denial, and humankind has settled in a different star system. Mal and Zoe lead the crew of the ship Serenity, which is named after the location of a battle that Mal, Zoe and the rest of the Independents decisively lost, as naming an entire ship after the worst life event that happened to the captain is likely to bring good things in the future.

The crew run a smuggling operation, mostly between the frontier regions of the star system. These frontier regions lack fertile land and governmental rule, making them perfectly analogous to the Wild West in a crazy random happenstance. However, added to this 1800s setting are the Reavers, cannibalistic humans who were dehumanized by drugs developed to calm them down. Reavers are seen by most critics as a vehicle for Whedon's anti-anti-depressant views. 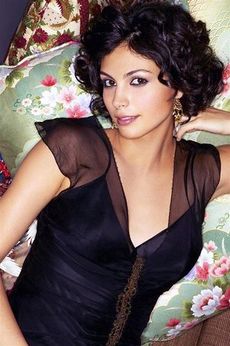 At the beginning of the series, the crew is composed of:

Mal also rents out space to passengers, including:

Mal and Wash locked up together in Adelai Niska's enhanced interrogation room with their abs exposed. This is also partly why people watch Firefly.

A notable element is the lack of aliens, unless Chinese people count Americans as aliens and vice versa. China and the United States apparently have become the sole superpowers to reach for the stars, and their cultures have merged. This allowed the show's characters to swear in Chinese, thereby bypassing FCC censorship guidelines, although in Chinese-speaking countries the show was banned for explicit and mispronounced language.

Another notable element is Mal's sheer amazing nature, a recurring trait throughout the episodes. For example, in the pilot "Serenity", Mal shoots an Alliance agent without breaking pace; in "The Train Job", the second pilot, Mal imitates Chuck Norris by kicking one of Niska's henchmen into his ship's own engine (as pictured at right); in "Safe", Mal saves River and Simon with little hesitation and a dramatic entrance; and so on. The amazement viewers feel upon viewing these actions has been overshadowed only by Jayne's very large gun collection.

11 of the 14 episodes of Firefly were broadcast on Fox over a three-month run. Unfortunately, these three months were not, as the case should have been, seven years.

The table below lists all 14 episodes in the order originally intended by the show's creators. Fox ordered two pilots: it was not satisfied with the original 90-minute pilot "Serenity", and ordered the 45-minute "The Train Job" to act as a new pilot. However, it is assumed that Fox executives merely wanted a shorter episode.

Whedon claims to have developed the concept after reading a book about the Battle of Gettysburg in the American Civil War. Apocryphal accounts counter that the idea occurred after watching a 12-hour marathon of Bonanza followed by a 12-hour marathon of Battlestar Galactica. In any case, he suddenly felt that the science fiction genre as a whole was becoming too pristine and rarefied; in other words, sci-fi was getting too futuristic. He wanted to depict living the harsh pioneer life, but in space and in the distant future. The reason for this particular subject matter may be the successful precedent set by Star Wars of depicting history from a long time ago, in a galaxy far, far away.

For the name of the show, Whedon wanted a word that would convey two simultaneous senses: a sense indicating invincibility, difficulty in squashing; and a sense indicating being in transit, and being constantly on the move. The restless—and doubtless unsquishable—firefly came to mind, and turned out to be an illuminating idea. 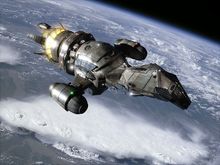 Despite being a piece of junk, this is far closer to why people watch Firefly.

Firefly conveyed an immediate feel by using the "found footage" technique of breaking every rule of cinematography one learns in film school. Subjects would be unfocused and out of frame, and the camera was hand-held, so that the view would constantly shake—and all of this was done deliberately, even with computer graphics footage. The optical defect of lens flare was also continued. Because of these flawed filming techniques, Firefly would later win an Emmy for Outstanding Visual Special Effects for a Series.

Despite such alarming techniques, Firefly was superior to most other TV series in that it depicted space with practically no sound. However, many viewers were shocked to find out that banjo and fiddle music could still be heard in space.

Unfortunately, Fox decided to try to kill Firefly, as the ruthless nature of the animal kingdom would have it. To accomplish this, Fox broadcast episodes out of order, and often aired baseball instead of Firefly, since it is a truth universally acknowledged that watching people try to hit a small ball with a thin wooden stick is far superior to deeply philosophical science fiction.

Set, costume, and scene design were intended to make it blatantly clear that the world of Firefly was a mixture of the Wild West, China, and Battlestar Galactica. For example, in a single scene, a man could be seen wearing Old West clothes and eating with chopsticks, with a Western tin cup full of tea next to him, and then could be thrown out a holographic bar window the next minute. Needless to say, such placement of items made the show rather confusing and thus, to a significant portion of viewers, awesome.

Firefly's design aesthetic also made sure to emphasize Whedon's vision of a gritty future. The spaceship Serenity was designed purposely with a utilitarian philosophy, which apparently involved making the spaceship look as ugly as possible. 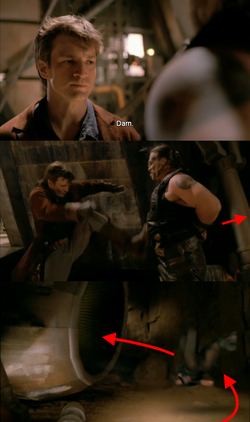 Mal kicking Niska's henchman into one of Serenity's engines. This is why people watch Firefly.

Despite its short original run of three months, Firefly quickly gained a large cult following. This fan community, which has been seeking Firefly's renewal since 2002, has become incredibly militant, loading every poll with pro-Firefly votes and spreading the word, often rather pretentiously. These fans style themselves Browncoats, after the Independent faction in the Unification War. However, they overlooked the fact that, in their struggle to save Firefly, they named themselves after the losing side of a war.

Undeterred, these Browncoats did gain a small victory when the movie Serenity was released. This victory was quickly extinguished, however, with the death of the most beloved character (Wash) in the series, at which point every fan in the theaters suddenly cried out in terror, and were suddenly silenced, mostly by the even more horrifying on-screen appearance of the Reavers. However, they cheered upon River's defeat of a roomful of Reavers, if only because one of them had an uncanny resemblance to Joss Whedon himself.

Featured Article  (read another featured article)
Featured version: 23 August 2009
This article has been featured on the front page. — You can nominate your favourite articles at Uncyclopedia:VFH.