From Uncyclopedia, the content-free encyclopedia
(Redirected from Buffy the Vampire Slayer)
Jump to navigation Jump to search
“I was friends with her only because, when she asked me to be her best friend, I thought she'd said "breast friend".”

For those without comedic tastes, the self-proclaimed experts at Wikipedia have an article about Buffy Summers. 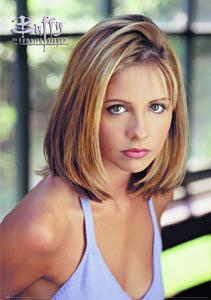 Buffy Anne Summers is the collective penname of three vampire fighting actresses: Kristy Swanson, Sarah Michelle Gellar, and Giselle Loren. Usually blonde, she has also been a brunette at times, although a darker hair color has not increased her off-camera intelligence quotient (85) appreciably.

Buffy was born to Hanky and Joy Winters, but, upon discovering that her hazel eyes (sometimes brown or blue, even multi-colored rainbow when she wears colored contact lenses) and blonde hair (sometimes brunette, when she forgets to dye it) made her a "summer" rather than a "winter," she changed her surname to Summers and moved from Los Angeles to Sunnydale, California (sort of like the New York Giants playing in New Jersey, but with vampires).

Since Buffy Summers is the alias of three actresses, her birth date and age are difficult to determine, and she claims to be a Capricorn, an Aquarius, and a Lesbian. As a child, she had homosexual relations with her cousin Celia and her friend Jolene, and she worshiped Olympic ice skater Dorothy Hamill from both afar and close up. She also had a series of strange dreams about women from earlier historical periods, all of whom killed male "monsters" with hard pointy sticks. However, as a high school student, Buffy pretended that lesbianism made her uncomfortable, and when her best friend, Willow Rosenberg (also known as Didlo Rosebud), came out as being gay, Buffy suggested that Dildo sew her labia together to form a pentagram. 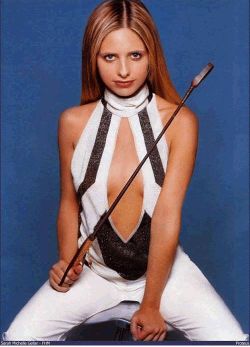 Buffy with her vampire-killing pen

Although she claimed only Angel, Riley Finn, and Spike as her boyfriends, she had sexual encounters with many others, including young boys and older men (Billy Fordham, Tyler, Jeffrey, Pike, Owen Thurman, Xander Harris, Tom Warner, Cameron Walker, Scott Hope, Ben Wilkinson, Parker Abrams, R. J., and Principal Robin Wood). She also "slept with" several corpses, male and female, often staying overnight in their tombs and engaging in the "dirtwalk of shame" in the morning.

During her life in Sunnydale, Buffy was committed to a mental hospital after believing that she had been given supernatural powers and was on a secret mission to slay vampires, demons, and other monsters that crawled out of a "hellmouth" that she believed was located under her new hometown. She was diagnosed with acute (because of her cuteness) paranoid schizophrenia and/or bipolarism, but was released after she promised not to stab living people in their chests with a wooden stake.

As an only child, Buffy was a lonely girl, her multiple personalities notwithstanding, and she created an imaginary playmate, a younger sister named Dawn, whom, in her confused mental state, Buffy believed to be an energy given fleshly form created by a band of mad monks. Likewise, after her father deserted her and her mother, Buffy created a surrogate father, her "watcher," librarian Rupert Giles. The world in which she dwelled in her disturbed imagination was fantastic, even bizarre at times, although at other times she danced and took long walks in the woods. 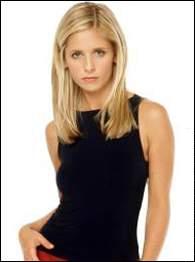 Even after death, Buffy cleans up nicely.

Buffy died three times, once by drowning as Kristy Swanson, again by throwing herself off a tower as Sarah Michelle Gellar, and finally in an alternate dimension as Giselle Loren. Her deaths oincided with the demise of their respective careers. During her careers, she also worked with Mimi Paley, Alexandra Lee, Candice Nicole, and Eliza Dushku, with whom she exchanged bodies with for a short time. Many other actresses have wanted to play the Buffy Summers role, including Charisma Carpenter, Julie Benz, and Katherine Hepburn.

Prior to her deaths, Buffy had decided that she was a robot, but a biker gang destroyed her, and she lies buried in three undisclosed locations in southern California (Hollywood, Studio City, and the San Fernando Valley). She is sometimes survived by her husband, Freddie Prince, and her Maltese mutt Thunder. Good Thunder. Good boy.