For those without comedic tastes, the so-called experts at Wikipedia have an article about 28 Days Later.

A censored, revised and unexplicit version of the movie was created by the World Gay Community in 2004 in response to extreme violence and demeanor of the original. However, it was so fucking boring that it never even passed the rating (could've been rated B for "Boring") and hence, never saw the day.
“arrrraaaeeeaaaaaaaagh!!!!”

28 Days Later is a post-apocalyptic romantic comedy film released by the British film industry in 2002. It is known as the first motion picture in movie history coming from England that does not actually feature secret agents, wizardry or Mr Bean (although all of these subjects are central to the film's plot). The film is set in a near-future London, where Queen Elizabeth II is dead, Harry Potter retires from Hogwarts and goes to shoot amateur pornography, "cocks" are finally called "roosters" and cars are driven on the right-hand side of the road. After roughly thirty seconds of establishing shots, executive producers decide to kill every English person with no acting ability, which tops to 95% of the British population, by the means of parodying existing global virii like AIDS, HIV, pregnancy and Britney Spears. The surviving characters, a ragtag group of coma patients, children and basketballers, are left to complete their journey to outside England, where American forces have already shot all of the infected with relative ease. 28 Days Later was released to critical and commercial success worldwide, despite its heavy racism and constant "Brits are idiots" themes.

In homage to 2001: A Space Odyssey, the film begins with a scene that establishes that monkeys can be turned into violent zombies by watching television. A group of animal-rights activists comes to rescue the monkeys, making sure to abandon their ski-masks while still in view of security cameras, but as with all activists they accidentally start the apocalypse instead. A haphazardly edited montage of screams and grinning monkeys establishes the mood of the film.

28 days later, The Scarecrow (Cillian Murphy), a mysteriously naked man, awakens in a hospital bed, and, like all normal people, responds to the decaying and lifeless world with disinterest. After roaming the streets looking for Pepsi, which is a panacea, he accidentally enters a church and encounters a pile of corpses and a hoard of catholic zombies who are indistinguishable from normal Catholics. Believing him to be a young boy, the Catholics drop their trousers, swarm toward him and give chase.

After running through the streets screaming, Scarecrow is saved by a pair of special forces operatives fully equipped with survival gear and molotov cocktails. Having successfully rescued the only other normal human in the immediate area, the rescuers blow up their supplies and discard their gear. The female rescuer, Selena, kills her male companion so that she won't die first just for being black, and she and Scarecrow head for a mysterious high-rise apartment lit by Christmas lights.

The apartment turns out to be a safehouse for a jailbait named Hannah and her father, Hamish, who abandons his heavy riot and demolitions gear for the protection of regular clothing. Since there are no banks or other fortifiable buildings in all of Europe, the building is barricaded by shopping carts, which prove more of a nuisance to humans than zombies. Since the film takes place before the invention of bottled water, and for some reason no rain is collecting in the laundry baskets on the roof, the group is forced to abandon the relative safety of their building to investigate a recorded message ("At the third stroke, it will be three thirty seven and eight seconds, beep, beep, beep"). Along the way, they discover the only grocery store in all of England, which is still fully stocked and powered, and learn to live and love again by staring at wild horses.

Scarecrow, Braveheart's best friend, Jailbait Hannah, and the token black chick locate an army post filled with randy soldiers and led by Dr Who (the northern gobby one]. After Hannah shags half the regiment, the secured building where they are staying is compromised when Scarecrow goes out for pizza and leaves the front door open. Only Scarecrow, Hannah, and Selena escape. They move to France and start a commune. Hannah changes her name to Betty Curse and leaves the commune to start a singing career.

28 Days Later was filmed primarily on a vintage 1970 16mm camera stolen from a museum. Some pickup shots during post-production were accomplished via a standard 640*480 webcam. All dialogue and sound were recorded on-set with a handheld memo recorder, which was also used to record the soundtrack from inside an elevator. Funding for the film was provided by the Pepsi corporation.

In order to appeal to a wide modern audience, the producers chose to emulate filming style of the 1980s, complete with poor acting, a ridiculous script, and funky yellow lighting. Numerous problems plagued production, including disappearing combat gear and a lack of European taxis made after 1956.

To keep audiences guessing, the director chose to experiment with new film concepts, including zombies smashing through windows during quiet moments, rapid disorienting cuts during action scenes, and sudden inexplicable reversals in character behavior and personality. To better capitalize on these stunning original ideas, they were used frequently throughout the script.

In keeping with the vintage style of the film, all editing was performed by unpaid college interns using antique analog equipment. The final reel was digitally transferred onto a cell-phone and submitted to FOX in an email. 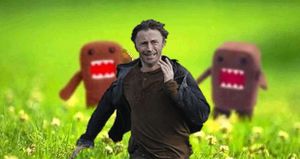 No Grues were harmed in the making of this film.

Marvel Comics has shamelessly released an entire franchise called "Marvel Zombies", blatantly ripped off from "28 Days/Months Later". It features the Rage virus infecting the Marvel Universe. However, due to hybridization with the Legacy Virus, it only affects superheroes. Not unexpectedly, a movie based upon the comics based upon 28 Days Later is due to be released in 2009, named "Rage Virus vs. Marvel Zombies vs. Army of Darkness vs. Freddy vs. Jason vs. Cthulhu vs. Alien vs. Predator vs. Hellraiser vs. Candyman vs. Godzilla vs. Mechagodzilla vs. King Ghidora vs. Chris Tucker vs. Chuck Norris". can you guess who will win

This article is part of UnFilm The preferred oeuvre of Drive-Ins everywhere.
Retrieved from "http://en.uncyclopedia.co/w/index.php?title=28_Days_Later&oldid=6085532"
Categories: